We were up early and away just after 7am, wanting to finish driving, if we could, before the worst heat of the afternoon.

Drove back south, leaving the Tropics, through Sapphire, to meet the Capricorn Highway at Anakie, where we turned west. Before long, we were passing through ranges  where the road was quite hilly. It was rather dramatic. I’d forgotten all about this, although we must have driven this route at least once before.

Refuelled at Alpha, then took the Tambo road to the south. This would save us some 170kms compared to the alternative of going via Barcaldine.

The sealed road soon turned to gravel. Some sections were quite stony, and some parts were corrugated. There were occasional sealed sections again, especially on the floodways.

As was our usual practice, as soon as we left the sealed road, we stopped and removed the weight distribution bars. We’d been told to do that, right back when we started caravanning, by the people at Hayman Reece.

We came upon one floodway very suddenly, with a big dip in the middle of a raised area, and bottomed out a bit. Then John heard a tyre going down rapidly. It was the driver’s side rear one on Truck. John spent some time fiddling around with the ordinary jack, trying to get it to fit under the lowered side. He wasn’t happy that this would hold, so we ended up using the awkward, slow, wind up one that belonged to Truck, as well.

When the wheel had been taken off, I was inspecting the tyre to try to find the cause of the flat – and found a nine inch split in the steel wheel rim, in the centre of the wheel. I thought it must have spread when we bottomed in the floodway, and then pinched the tube inside, because I couldn’t find any tyre damage. Later on, a close inspection revealed what looked like an old split, about four inches long and a bit rusted inside, and new splits on each end of that – presumably from the floodway. We had no idea when we made the older split. My guess would be possibly on the really rough and rocky crossing of the flooded river on the way into the Bungles in 2007.

When changing the wheel, John also found an oil seal leak in the rear left side. Again!

After that, we were relieved to reach sealed road again, at the corner with the Dawson Development Road, with no further mishaps.  The last part of this road, through to Tambo, was really scenic – the western tail off of the Carnarvon Ranges. But we were both a bit too tense to really enjoy it. Along the way, a topic of conversation had been about whether we should buy a new Defender, after this trip!

Had our packed lunch at the lovely rest area at Tambo. Then continued, through a hot afternoon, to Charleville, where we got fuel. Then back tracked a bit, to drive out to the Evening Star Caravan Park, to the NW of the town.

This caravan park, on a cattle property, was fairly new. It was 9kms from Charleville, on the Adavale road. Our powered site cost $24.

We thought this was going to be a really nice caravan park ,when the new tree plantings grew a bit higher. All the sites were drive through style, with a good separation between them. The bathrooms were unisex style. They had a very pleasant communal compfire area.

We got talking to the people on the next site, travelling in a converted bus. Very interesting. She was a writer. Both had done a lot of living on boats, and travelling around. They lived in Tasmania, near Stanley, and knew our friends S and M, who had the Post Office there. We swapped details, and invited them to stay at our place, if they wished, when they next passed through Melbourne.

Decided we would have two nights here. It was very pleasant to be in the bush. It was the sort of place we’d stay at for a week or more. if we were not on a deadline.

I made tandoori chicken for tea.

The night was very pleasantly warm – not always the case, inland.

We were now into the last week of this trip.

Near Augathella, we nearly hit a mob of emus, this morning. Of course, the group that was on one side of the road, all decided at the last minute that they had to make a dash to the other side. John managed to slow down just enough – without endangering the rig – to just brush the tail feathers of the last bird. That was one lucky emu. The brakes all seemed to be working quite efficiently!

Stopped for a coffee break at the excellent rest are at Tambo. Got chatting to the occupants of another van that was parked there. Discovered that they were also going up to Adels to work. What a co-incidence! But they were not due to start until the end of this month.

He had hit his van on the corner of the shelter roof, as he’d pulled in, and taken the top front corner off the van. So now he had to find somewhere to get repairs.

They seemed pleasant people, which was good, because working with people one does not get on with, in such an isolated place, gets really difficult.

Had decided to try to make Winton today. We would feel happier once we made it to Mt Isa!

We were in rain from Longreach on. It was quite heavy at first, around Longreach, but had eased off somewhat by the time we reached Winton. 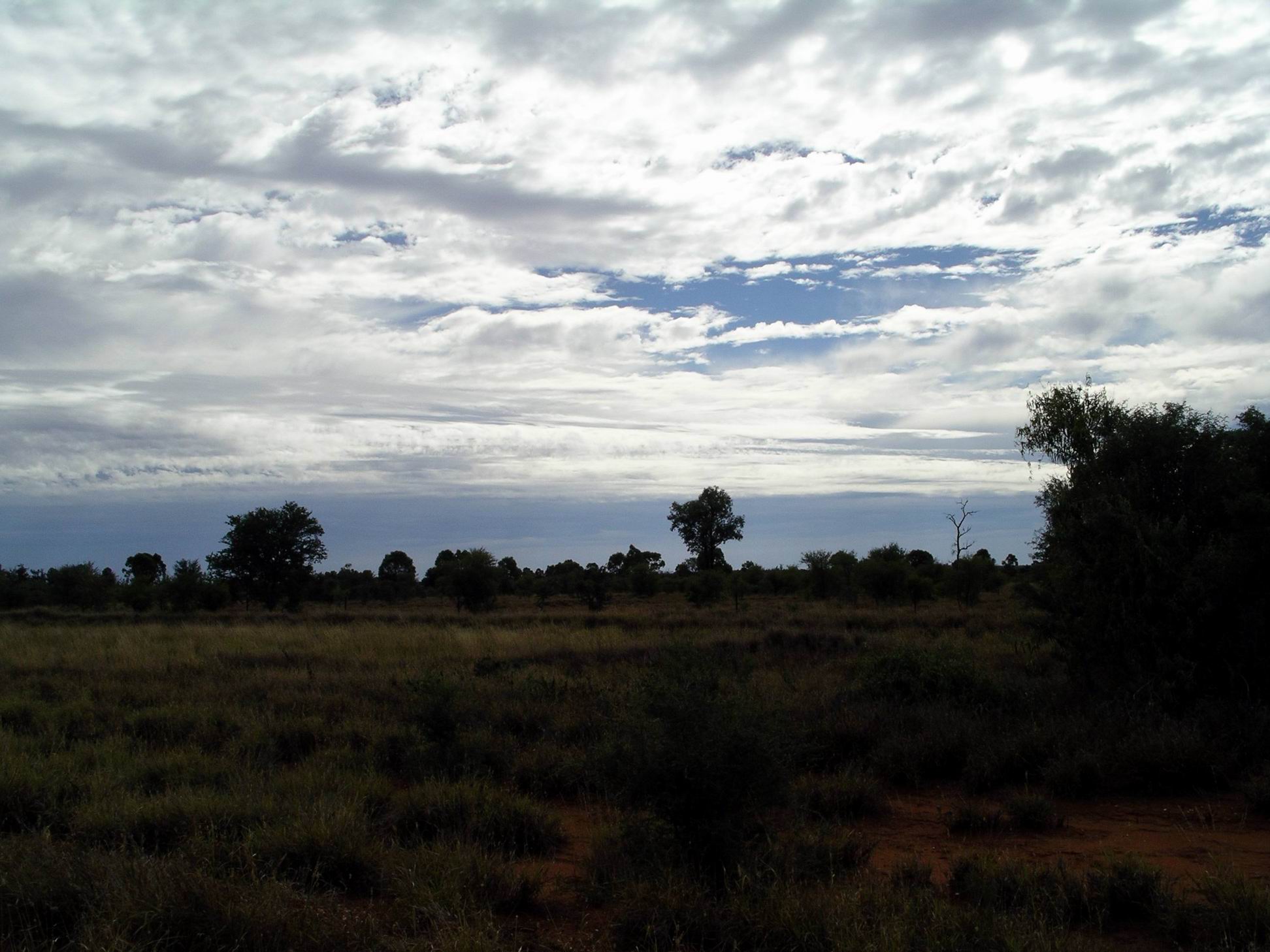 The radio news said the Landsborough Highway was closed at Kynuna, after Winton. However, we were not sure if this was still accurate, as there seemed to be a lot of trucks passing us, heading east, and they had to have come from Cloncurry or beyond.

Refuelled again at Winton, even though we’d only done 186kms. With the rain. we thought fuel supplies further on might be uncertain. $1.35cpl.

Went into the Matilda Caravan Park at Winton. $18 after discount, staying hitched up.

The camp ground was really muddy in the drizzling rain. Apart from necessary visits to the amenities, we just hunkered down in the van, had an easy tea and an early night. 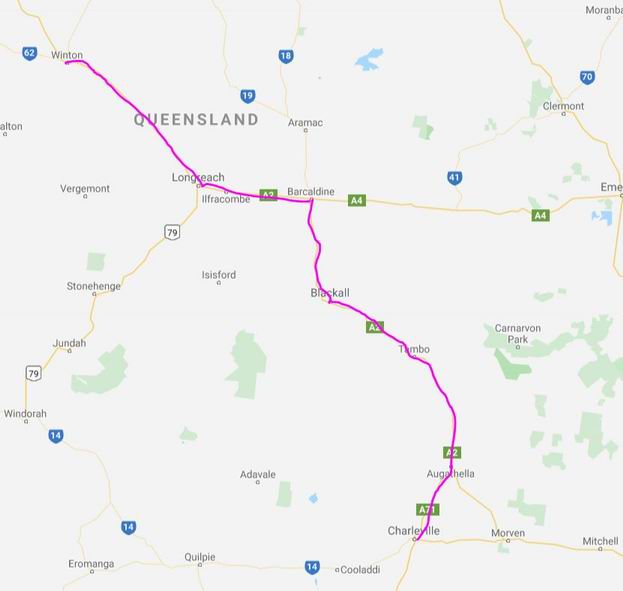 Another hot day of driving. The road remained good – wide and smooth.

Lots of large truck traffic on the highways

Ate lunch at the well set up roadside stop at Tambo. Refuelled in that town too – $1.11cpl.

Set up for the night at the Gunnadoo Caravan Park in Longreach – $22. The parks up this way were still very empty.

We walked up to the Stockmans Hall of Fame. There, persuaded the lady in charge to display some of the Pungalina brochures. They are rather selective about what they display, clearly.

The brief time in the air conditioned building was blissful!

Another early start. These sorts of days were not our ideal of travel!

We left Kidmans Camp at 7.30am, and turned north again. About an hour and a half later, crossed the border into Qld. No fanfare or fuss there – just a cattle grid over a small ditch and a low fence stretching away on both sides of the road. A sign lets the traveller know they are entering Queensland – just in case they didn’t yet know. And the flat road stretched on into the distance.

Refuelled at the servo on the southern side of Cunnamulla, where the highway we were following turned away from that town. 94cpl.

Stopped beside the road on the outskirts of Charleville to eat the sandwiches I’d packed this morning.

On these long driving days, I took some turns driving the rig, while John napped in the passenger seat.

Refuelled and had a coffee break at Tambo. I’d thought we might overnight here – had stayed before – but John felt able to keep going. Fuel was 94cpl.

At the Blackall Caravan Park we were able to stay hitched up – $16 for the night.

Quick and basic set up again, then tea. It was too late to go for a walk at all. 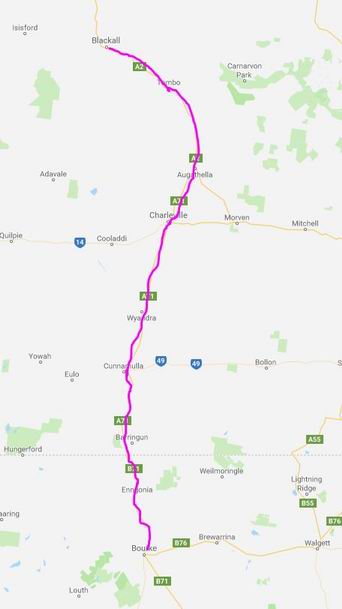 It began to rain about 7am. When we got up, the sky was a really dark and threatening grey.

Packing up was relatively easy, without the awning to worry about. The space we needed to back Truck onto the van, and move out, was clear by the time we were ready to go.

Refuelled in Charleville – 83cpl – much better!

It was raining as we left Charleville and for much of the way north to Tambo.

Today’s was only going to be a short leg, because John wanted to stop and have a good look around Tambo. His brother C had spent some time based there, in the 1950’s, with the old PMG (forerunner to Telstra), responsible for line maintenance. John remembered his descriptions of the place and the area as being really outback and primitive, hot, dry and dusty, so he wanted to see it now and tell C about it.

We reached Tambo at lunchtime and got a spot at the Tambo Caravan Park, where we could stay hitched up for the night. It cost $12. The place was actually more like a paddock than a caravan park, but it would do for the night. The lady owner was very friendly and talkative.

After lunch, we went for a walk around the township, in occasional light spits of rain and with heavy grey skies. 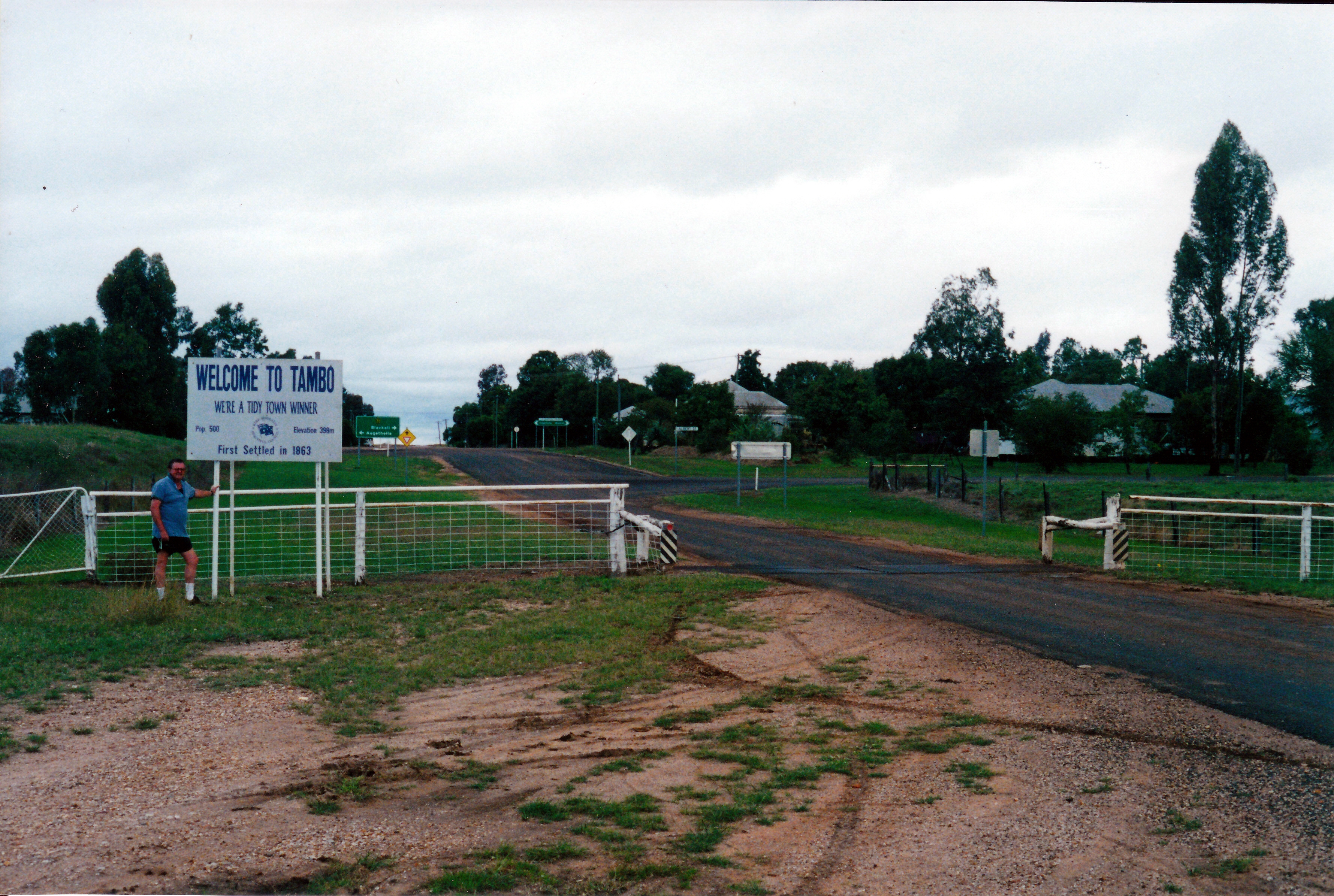 Cattle grid at entry to town of Tambo

The place must have been rather different in the 50’s, because we found Tambo a pleasant little town. I think John felt rather dudded that it bore no resemblance to the picture he had in mind.

Walked the length of the main street, and visited the Tambo Teddies shop – the town’s attempt to tap into this niche market. Tambo Teddies are well known.

I had long wanted to see the Barcoo River, of bush poet fame, so we walked to the outskirts and I took a photo of it. Little and tame it was too but this was close to its origins, so maybe it becomes a bigger stream, further down, before it flows into Cooper Creek.

We attempted to walk the publicized Coolibah Walk, along the river – basically just a small track through a paddock. However, it was exercise.

Back at camp, John phoned C and told him that Tambo was looking quite attractive, these days! We’d bought a cloth badge and a postcard and wrote him a little letter from there. John said to sew the badge on his pyjamas!

I phoned Rubyvale Caravan Park and booked us in there. John really wants to have another go at sapphire fossicking, so the rough plan is to deviate to the east for that, then backtrack to head west.

John phoned Landrover in Rockhampton and booked Truck in for the 100,000kms service, next Monday. He had been hoping to wait until we reach Mt Isa, but it won’t wait that distance. I phoned the Big 4 caravan park there and booked us a unit for Sunday night. We planned to leave the van at Rubyvale and just take Truck to the coast.

Rain set in later in the afternoon. There were several other overnighters in the park by then and they did not seem at all impressed with the weather.

Talked with the park lady about routes from here. I’d been eyeing the direct, unsealed route from here to Alpha, but she advised us to stick to the highway, through Barcaldine. There had been travellers bogged on the black soil country to the NE, last week.

Our travel today – and tomorrow