It was a routine trip home, though John said he could feel the extra weight of the wood, when going down the range to Yarra Glen!

It was a real relief to get home again with the rig intact. 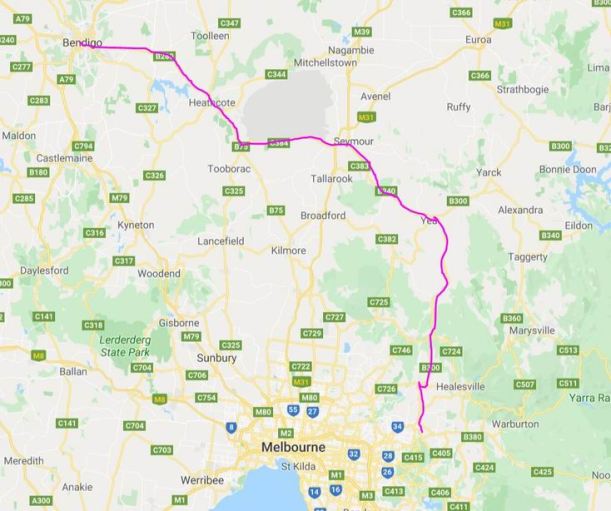 All was well at home. The house sitters had done a competent job of looking after the place for the months we were away.

The old cat seemed to be appreciative that we were back. I was happy he was still surviving.

So then it was the bigger than normal job to get the van and Truck unpacked and cleaned out – over the space of several days.

* Number of different places stayed at:  17

Note: these stats are skewed by the way we lived this trip. Had no way of calculating litres put into Truck from fuel drum, so no consumption stats for that time. So we have not worked out the usual averages. Likewise, accommodation data is affected by the months of free accommodation at Pungalina.

W finished the last of the repairs. The wheel was replaced. His bill was $560 – extremely reasonable, we thought.

Left Birchip about midday.  Decided to go only as far as Bendigo, partly because of the time of day, partly to catch up with daughter and family there.

The drive was slightly tense, hoping that all the repairs were good. We still had the weight of the offending wood on board!

Drove into the centre of town and wandered about. Bought some shoes for John at the Rivers store.

As we drove about, John realized that the speedo on Truck was not working. He found somewhere that could look at it, there and then, and was able to get the cable replaced.

We had a brief visit with the family. Grandson had grown so much. The difference between just two years old, when we last saw him, and getting on for three now, was really marked.

Through our time away, I had been regularly writing postcards to him and sending them out on the mail plane. Had taken a stock of cards with me, mostly of Australian animals and birds. He had carefully saved them all and brought them out for me to go over again with him. So it had been worth the effort.

The required parts had come in from wherever, and W worked on our repairs, in amongst the other jobs he had booked in. Our problem had disrupted his schedule! 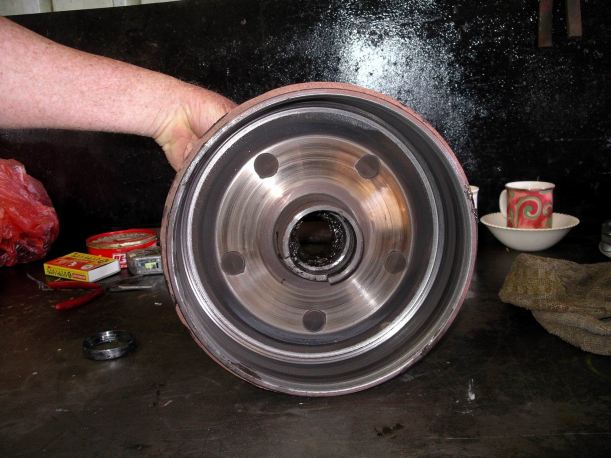 We went for a walk along one side of Birchip’s main street, and back the other side. It seemed a very pleasant little town.

W had to order in parts, so only some of the work on the wheel could be done today.

I spent some time chatting with A, especially about the quilting work she did.

Apart from that, just filled in time at the van.

After leaving Gol Gol had to go back through the centre of Mildura – not the easiest route on a Monday morning, with a navigator who wasn’t always sure enough of turns to enable the driver to be in the correct lane! Things got a bit tense……

Travelled south to Ouyen, then on through Lascelles to Birchip. Refuelled at Ouyen – $1.42 cpl. We had done 499kms.

All seemed well, until we pulled into the Birchip Caravan Park to book in. As soon as we stopped, could see smoke pouring out of the passenger side wheel of the van – and I could actually see flames!

PANIC. John doused it with water. The smell was awful – burning rubber, hot metal. It was lucky that we stopped at that point – much further, and we might have lost the whole van.

But what an entrance to a caravan park……Booked in, explaining that we were not sure how long we would be staying, now. Though that was kind of obvious! It cost $17.60 a night.

We were able to slowly drive the van in and park on our site.

Clearly, W was going to have a bigger job than we had intended.

After getting set up, we drove Truck to find W’s workshop – with his home next door to it. He came to the van to inspect the damage, and removed the wheel, leaving that side propped up.

The bearings in the van wheel had collapsed. Clearly, all that ironwood timber we had been carrying was too heavy for the van. It was probably surprising we’d gotten this far, over roads that were rough in parts. It had also been a real pain, having to either haul the planks that were stored along the van floor, outside whenever we set up, and put them back when packing up, or move them to one side of the floor and try to work around them. Murphy’s Law dictated that the wood was always up against whichever cupboard needed to be opened. Stubbed toes were also an issue. I was thoroughly sick of ironwood, even before our pyrotechnic display.

W thought he could fix it, but there was added damage to the wheel, brakes and surrounds from the heat. He did not know how long it would take to get the parts and complete the work. 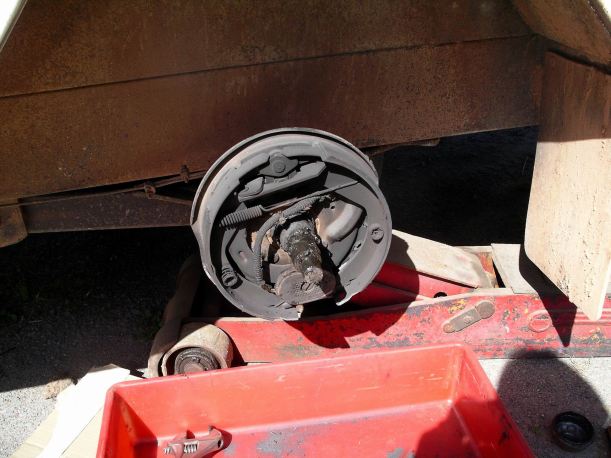 Since Truck had been booked in for service, W completed that today. I chatted with A while that was going on.

I was sad that, through unwise actions on our part, we had damaged our lovely little van, which had seen us in such good stead, until now.

It was now the month we originally thought we would be leaving Pungalina. Leaving when we did was better in that there had been some time to take breaks from travel on the way home.

Spent much of today seeing the places that John wanted to visit. Spent a couple of hours at the rock and gem shop, just out of Mildura.  John was more engrossed in the displays than I was.

Amused myself by taking photos of pigeons on a power line. They were amusing to watch.

He also wanted to find a roadside stall that he thought he remembered from ages ago, that sold good citrus fruit. So we cruised around the town outskirts, in several directions, without finding what he had in mind. But we did find a stall where we were able to buy oranges and grapefruit.

By 10am we were all packed up again and once more heading south.

It had been a pleasant, albeit costly, interlude in Broken Hill. I felt as if we’d had the chance to have a thorough look around the place. 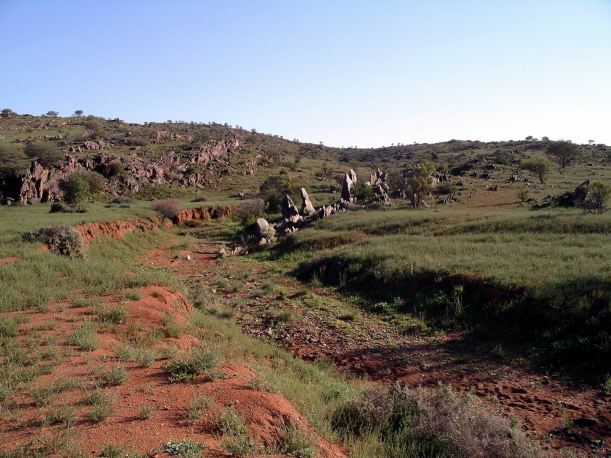 I think we were just about used to people and civilization again….

Our destination was Gol Gol, on the NSW side of the Murray River, a few kms from Mildura.

Booked into the River Gardens Caravan Park – $26 a night for an en suite site. I could get used to these! We booked in for two nights because John wanted to visit a place that had an extensive rock collection. We also had a night to fill in before our appointment at Birchip.

The caravan park was a pleasant one, with a frontage to the Murray River – which was occupied by cabins, unfortunately. No views to be had. Our site was nicely shaded.

We went for a late afternoon walk around the nearby streets, looking at the definitely up-market homes that fronted the river. Rather lovely – except during the occasional flood.

Drove back out to Silverton to finalize the purchase of the two prints from the Horizon Gallery. They would be shipped in a month or so.

That done, I wanted to find the old railway station. The rail line was long abandoned, but this was an aspect of historic Silverton we had not seen before. It was a little way out of the township, down a side track.

The old rail line and siding type building were very photogenic, with the low bush around. I spent some time prowling about and taking shots – and was very pleased with the effort.

Fish and chips for tea again, tonight. I measure the passing of the weeks by fish and chip Fridays!

Last night I was browsing a booklet obtained from the Information Centre. Saw an ad for a landscape photographer, so today it was off to the gallery of Boris Hlavica. His photos were wonderful. I could really have spent up big but confined self to buying a photo of Lake Eyre at dusk. The focus was on detail of the salt surface, but the moon was rising in the distance. He told us that he didn’t even see that until after it was developed! In conversation, discovered that he used to live nearby us, at Mt Evelyn.

Driving around the town, came across a small gallery tucked away on a corner in an old part of town. It was something a bit different – an artist called Wendy Martin. We browsed. I bought a painting of a bush scene done on a chunk of Broken Hill quartz type rock. Kitch, but attractive.

John decided he wanted to get Truck serviced – it was due soon – by W the mechanic who worked at Pungalina, who lived at Birchip in Victoria. He had been so impressed by what he saw of W’s work, and we had been so unimpressed, of recent time, with the work of the official service centres in Melbourne. So he phoned W and arranged for this to happen on Monday. We would stay a night or two at the caravan park there.

Visiting the Pro Hart Gallery was on my must-do list.

Another Brushman of the Bush, many of his works were not to my taste, but there was no doubt they captured aspects of the Australian way of life. I was surprised to find that his gallery contained many works by other artists – really was his own private art collection.

There were lots of interesting memorabilia and quirky things the artist had created.

I was captivated by paintings that showed the natural environment, rather than the peopled one which was what I had previously associated with Pro Hart. Finished up buying an unframed print that depicted white water birds in a treed swamp area – predominantly blues and greens, with the contrast of the white birds. It had a haunting sort of quality that got to me. Also bought some cards.

From there, we went on to the gallery of Roxanne Minchin. Several years ago we had bought some inexpensive, small,  board mounted prints by her husband Eric, and her. Since then, Eric Minchin had died and she appeared to have developed much more of her own style. I really liked her newer works. We ended up buying a framed limited edition print – quite large – depicting an isolated old farm cottage, in summer. The searing heat was depicted by the dominant red and orange colours. It was very dramatic and bold.

Looks better without reflections on the glass!

We were definitely expending our earnings on lasting items!