John took our Truck up to do the watering, and refuelled it. Had done 382kms.

The three men of the survey party arrived. They had a vehicle, which two of them drove in, and a helicopter. This had a device resembling a rocket, slung underneath it, which was the actual aerial survey machine. Apparently, it was potential diamond bearing material they were surveying for. 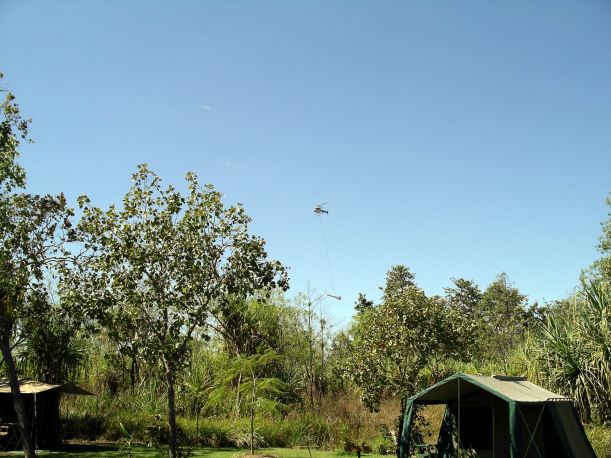 The helicopter had to go into the Robinson River community, before coming on here. I wasn’t sure why – whether to refuel, or for some other reason. No one had informed the general community members about what was coming. Apparently they took fright at this appearing, thought they were about to be bombed, and took to the bush!

I welcomed them, got them settled into their tents, then served them lunch – on the table outside. Plates of assorted salad and cold meats. There were muffins (from my freezer stock) and fruit.

They went off after lunch, to start their work, and I got on with tea prep.

Because we were expecting other guests over this period, and they would overlap, I had put some thought into menus, trying to prevent too much duplication of meals for the longer staying survey men.

I made carrot soup to chill for tomorrow’s lunch. Made a fruit salad.

Served only a few pre-dinner nibbles – didn’t think the men would be much into these.

Tea was BBQ steaks, with potato and sweet potato chippies and green salad. Dessert was fruit salad and cream.

These men did not have to be “entertained” in the same way as other guests. They could be served their coffee after dinner, then left to their own devices. But they did need to get working in the morning as early as possible, so that meant early mornings for us, to fire up the donkey and get breakfast ready. 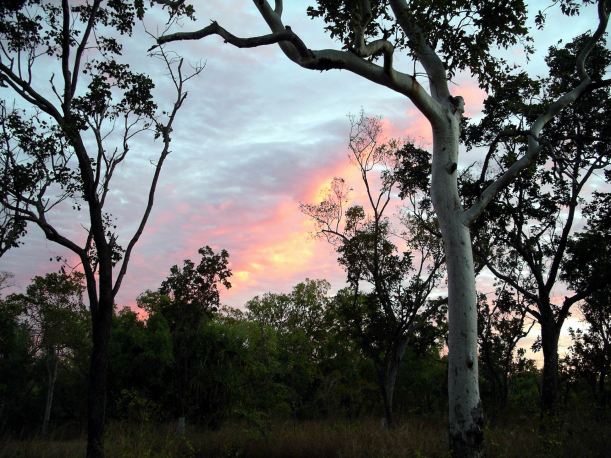 Turned the fridges on to cool down. Stocked the drinks fridge with cans of beer and pre-mixed spirits, and soft drinks.

Did a couple of runs between house and camp, ferrying supplies for the fridges.

I faxed the mail plane order to Tennant Creek, while I was up at the house. It was not all that much, mostly items that A wanted for the house.

I cleaned the showers and toilets. Swept out the dining tent and tidied it.

By now, there was not the same sense of tension about expected guests – we had proved to ourselves that we could do a good job with them. 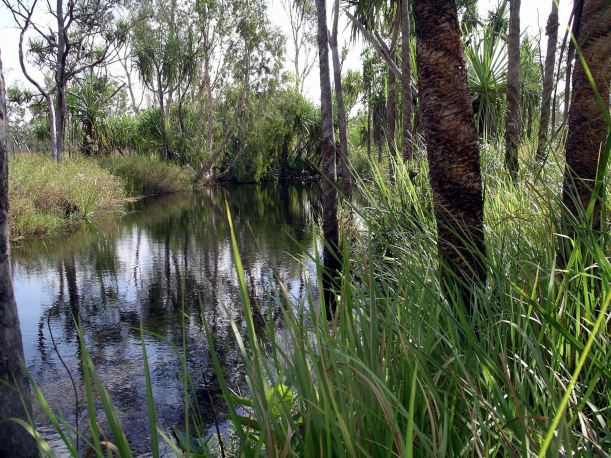 The campers left today. Their comments in the guest book were:

* Thank you, O, for the wonderful, unique, experience.

* Fantastic. What an experience. Thanks O.

We were gearing up for a series of guests and a long spell without a break.

I worked on finalizing the tents, ready for occupation, and preparing more food ahead of time. Made a boiled fruit cake, which should keep well.

John had to mow the camp lawns and rake leaves.

John watering his corn patch by the van

O managed to coax Beau to bring her pups to where he could reach them. She allowed him to put them into a secure cage he had cobbled together in the house/shed, beside the Troopy. She could jump over the side when she wanted out, but the pups were secure. Beautiful little creatures. One male and one female. 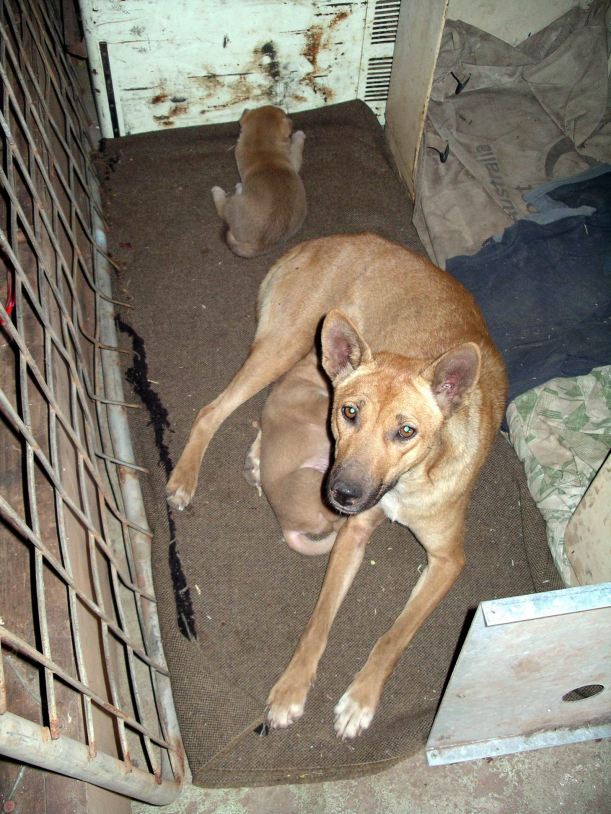 Beau and babies in a much safer area

I did dinner for the six camper friends of O’s, plus him. They paid for their meal – to O. We had decided a while back that $25 a head was a fair price for my incidental evening meals.

I had to fetch needed items from the house, in the morning. I got by with just the drinks fridge turned on; it had to be on anyway, in case the guests wanted cold drinks from it.

Main course was roast marinated beef, with vegies and gravy, and muffin Yorkshire puddings. Dessert was pannacotta with berry coulis and cream.

This meal was becoming quite routine, now. Really, the only variable was the quality of the beef, and there wasn’t anything much I could do about that. Marinate, slow cook, and hope!

Last, served some biscuits with a couple of cheeses, and walnuts. This was served when they were back around the camp fire, having coffee.

The clean up was not huge, compared to when A’s group was here. The campers were not inclined to linger too late, so we got to bed at a reasonable hour.

We took our day off today, because tomorrow I had to do a meal for camping guests.

They were a party of six, again  known somehow to O, from his childhood home area in northern Victoria. He had put them in a site not often used – beside the Safari Camp Creek, but on the opposite side. We hadn’t noticed when they came in and hadn’t been told at the time, but I thought it must have been about last Sunday. They had been doing their own exploring about the place, although O had taken them out and about a couple of times.

We decided to try to find Ringo’s Song, out to the east. This spot was marked on the mud map of the place, and O had talked about it. He had indicated that the track out there should be dry enough, now, to travel on, but he had not had time, this year, to clear it of any debris.

I was intrigued by the name for the place. Apparently, it derived from when there was a mustering group camped out there – when the feral cattle were mustered, after the purchase of the place. The mustering crew were from the neighbouring Seven Emu Station. One of the stockmen – Ringo – had a guitar, and did some singing around the evening campfires. Quite a poetic name, I thought, and I was keen to go see if the place lived up to it.

Took the driveway track, then the one towards the wetlands, for a little way, then branched off this to the north.

We had to proceed even more carefully than was usual on the property tracks, because the track was hard to discern.

In some places, we had to clear light fallen timber from the track.

It was worth the effort – there were a couple of really pretty water hole/creek areas. I thought the first one of these was what was marked as Shadforth’s Camp on the map. This had a lot of water lilies growing on the water hole.

The track went sort of round that and across a gutter like creek, then further on we came to what seemed to be more of a flowing creek, and presumed this was Ringo’s Song. But we were guessing, really. Could not discern a track going further on, though the mud map indicated it did. 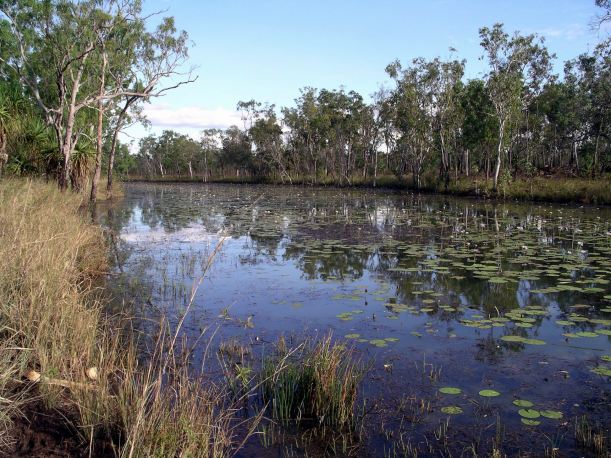 We walked around for a while, exploring.

Admired the excellent stands of pandanus growing here, particularly a fan shaped one.

It definitely was worth the effort to get out there.

O left before daybreak, with tractor and trailer, on the fuel drum run. The delivery truck would have dropped them off – just up the entrance track a little way. There were 6000 litres of avgas to be transported in large drums.

John’s corn crop by our van was growing well. The regular dose of “fertilizer” from our night bucket in the van, seemed to be to its liking!

O got back with the fuel, right on dark. He had left instructions that, if he was not back when it got dark, we were to send out a rescue party! It was a relief for all concerned, to have the fuel all organized now, meaning the survey group’s booking would go ahead.

This was not a day off for us, but we went out to the wetlands for a while, in the afternoon, to do the monthly bird survey there, while we still had the time. I kind of consider this to be within the scope of our work, rather than leisure. Who knows what we might find, that would bring bird watchers flocking?

The lake had shrunk quite noticeably – what was a wide area of mud was now dry, powdery dust. 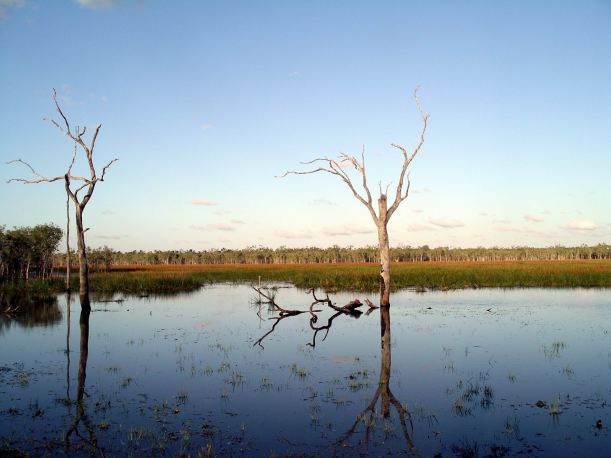 I spent quite a lot of the day planning the detailed menus for the coming run of guests, and preparing the associated running sheets.

O and W had been working together to create a type of heavy duty trailer – a platform on four wheels, using wheels from the old truck and other materials about the place. This would, hopefully, solve the issue of getting the mining survey company’s fuel in here. A tractor would be used to tow the trailer – it would be a slow trip! 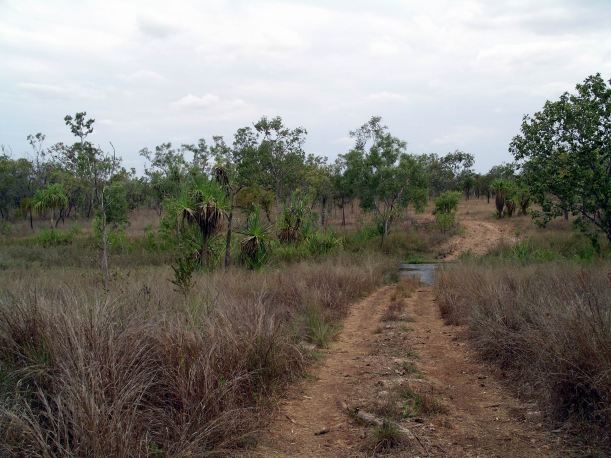 Slow driving at the best of times

Now that we were so much into “winter”, there were some quite heavy dews through the nights, and it sometimes felt quite chilly. The heat and humidity of when we first arrived here were but a memory!

Bush shapes on a winter morning

I faxed off this week’s plane order. It was a small one, fruit and veg for us and the house, cheese, pasta, cereals, mettwurst for the house. And a dozen small buttons – A had been sewing children’s clothes.

Faxed off the truck orders to Mt Isa. The Woolworths order was not all that big and was evenly divided between items for the camp/ourselves, and those for the house. By contrast, the greengrocery order seemed a large one – again evenly divided. A was really getting into the spirit of this remote area ordering! Notable items were 8 dozen eggs, 10 kilos potatoes, ditto onions, a kilo of garlic for A.

Beau dingo had birthed two pups. She’d made herself a bit of a nest under the office caravan, where it was a pretty tight fit. O was worried that they might become dinner for a python but decided to leave them there for a few days – not least of which while he figured out a way to get under there to get them! At least, she stayed around the house area, rather than going bush to have her babies. 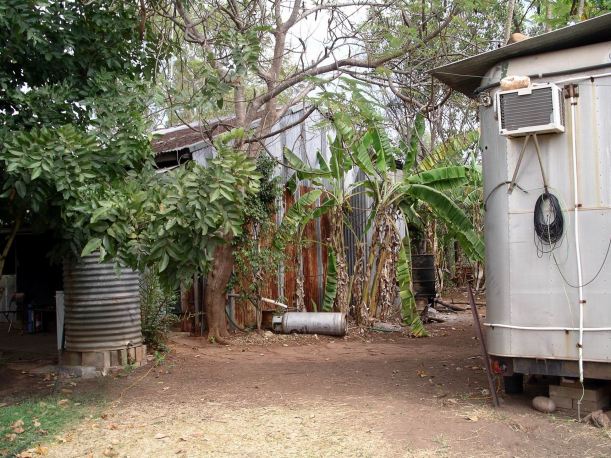 I worked on preparing the next truck orders, and this week’s mail plane one. I had to work with A on what she needed for the house meals and incorporate this into the overall orders.

John did his usual chores about the place. 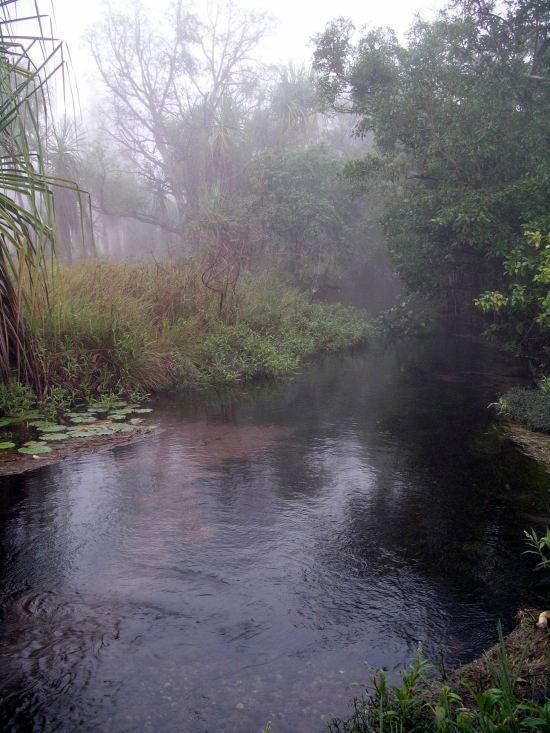 Our creek in winter