After breakfast, drove to the Milyering Visitor Centre, the information centre for the Cape Range National Park. Browsed the information boards, displays and the goods for sale.

I bought some post cards – as usual – and a polo shirt for each of us. They had very tasteful designs and colours here – not always the case – and they even had polos with the all important breast pocket. John needs this on his shirts because of always having to alternate sets of glasses.

Then we toured around the other camp sites in the Park, checking them out for future reference.

Osprey was pleasant, but exposed and windy – and the wind never seems to stop for long! Though that might be a product of the time of year? One could fish off the rocks there.

We eventually decided that our Mesa, or Neds, were probably the best, with Yardie next – although there was much more traffic there.

We continued on south, as far as Yardie Creek, where the sealed road stops. At times, it is possible to cross Yardie Creek, with a 4WD vehicle, depending on whether the creek mouth is open, and the state of the sandbanks at the creek mouth. In ’93, we drove up the unsealed track from Coral Bay, through Ningaloo Station, and crossed Yardie Creek on our way to Exmouth. Looking at the creek today, though, not sure it would be driveable now, even with the more capable Landrover. Not going to try it, anyway.

Parked in the designated car park at Yardie Creek, then walked the rough track up the gorge. This was a walk we had done before, but it was lovely, and worth doing again. It was only a couple of kms, all up. We did need to watch where our feet were going though – plenty of rocks.

The water in the creek contrasted with the red rock walls of the gorge.

Surprisingly few travellers seemed to walk right along the track length, to the end point with its great outlook back down the creek, as well as over the gorge. They only went part way along, where the track was more formed, then turned back. So we were alone on the second section, which was great.

Then it was back to camp to laze away the rest of the day.

Today was more of the same.

This was a great “chill out” and we were both appreciating the really slow pace.

John did not have TV, of course, but he was able to get in a little computer gaming on his laptop, at night.

There were some brilliant sunsets here. 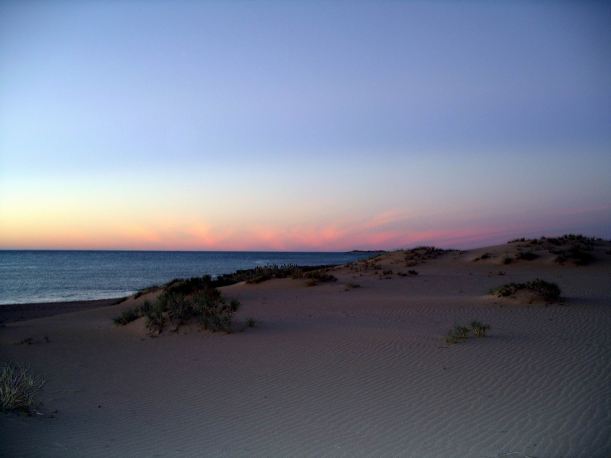 I wasn’t all that sure, at the beginning, but had now decided that this was a great place, after all. This new site was one of the best – only one neighbour, plus views.

The wind dropped during the day, but came back at night.

There was great news for us this morning – we were able to move across to the “good side”. Very happy about that!

It was not too much hassle to move. We walked a lot of the camp stuff across. The biggest task was taking the awning down, then re-erecting it. But it was certainly worth the effort.

We were right on the end of the row there – Site 14. We had a view to the sea – distant, across a bit of a dry inlet. Could also see to the Cape Range behind the flat coastal strip.

On the new site – our van on the far right side

After that, had the usual sort of day – walking, fishing, reading.

I was not really tempted to swim here, despite the heat. I wasn’t sure about the currents – or the things that live in the sea!

The campground hosts caught a crayfish and had it out to show us. They were allowed to put out cray pots.

In our new site, at night, we could just hear the sound of the sea, to go to sleep by.

It was still windy.

We drove back into Exmouth.

On the way, called into the Jurabi Turtle Centre, which aims to minimize people’s impacts on nesting turtles, through education and controlled access to viewing them. Nesting was over the summer months, so viewing them was not an issue for us at this time of year. We were very impressed with the Centre.

Now that we knew we were accommodated and could stay a while, it was time for some “extras”. We went to the Library. I was able to borrow twelve books – absolute bliss! John did a computer download.

Found a Kailis outlet in town and bought some red emperor. It was expensive, but I had always thought Kailis linked places were that. I did not buy any prawn meat, because it was $47 a kilo!

Bought bread rolls to take back to the van to fill for lunch.

After that, John fished off the beach. I went for a long walk along it.

Tracks in the beach at Mesa Camp

The van was in the full sun and the batteries were well charged by the solar system.

We were fed, organized, packed up, and at the National Park Entrance at 8.30am.

There were only a couple of other vehicles ahead of us.

The bad news was that there were no sites becoming available at either Lakeside or Ned’s. So much for our research! But we were offered one at Mesa and took that – better than the alternative of going back to Exmouth! We told ourselves that it was only at the other end of the beach from Ned’s. It was going to cost us $10 a night.

Drove on down the road and into the Mesa camp.

Of course, we got one of the no-view sites! The campers who had been occupying it were moving across to one of the better sites that was being vacated. We were not best pleased, but had to be philosophical about it.

We discussed with the lovely couple who were the campground hosts, the possibility that we, too, might move sites to one with a view – if one became vacant during our time here. They agreed to keep that in mind for us.

And so we set up, on the very open, bare site, hoping it would be a short stay! 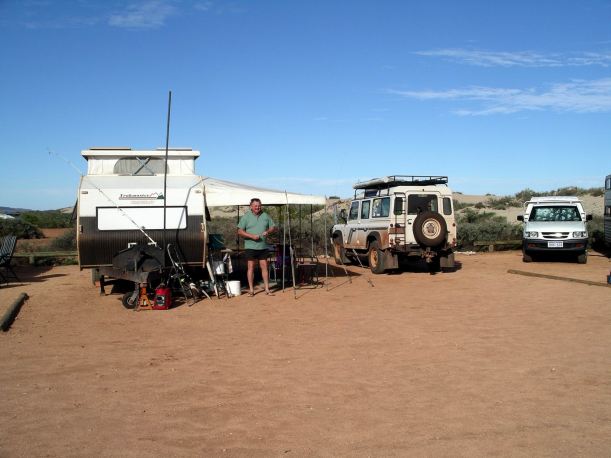 It was very windy.

After setting up, walked to the beach, through low dunes, and walked along it for a bit. The sand was very soft.

Checked out the long drop amenities on the way to the beach – very clean.

John went down to the beach to try some fishing, after  lunch. No joy there. 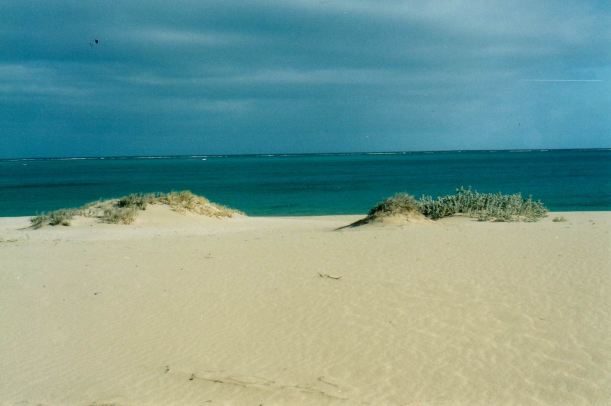 Beach at Mesa – waves breaking on Ningaloo Reef, in distance

There was another Trakmaster van here – a Sturt model. The people were from Tasmania. They had one of the “good” sites.

The campground hosts held a happy hour get together in the late afternoon, and we wandered across to that and sat chatting with the small group of campers. Very pleasant.

Today’s was a routine drive through some fairly uninteresting country, that we’d driven a few times already.

Took the short cut through Giralia Station to the Exmouth road. It was now a good. sealed road – last time we drove this, it was gravel.

I’d intended to stop at the Kailis seafood factory, not far past the big Learmonth Airforce Base, but the Kailis place was closed for a couple of hours over lunchtime. We’d bought great prawns there on previous trips.

Reached Exmouth about 1pm. Went into the Ningaloo Caravan Park, in the town. It was a Top Tourist park – we were back in the realm of discounts! $23.40 a night, after that. The park was full. It was of the expected high standard. The amenities were clean. There appeared to be some pressure on the washing machines and clothes lines, though.

After setting up, John watched football on TV, whilst I went for a walk to the shops – not too far.

I went to the Tourist Information Centre and found out about camping out in the Cape Range National Park. They did not take bookings for sites in the several campgrounds scattered along the coast. One must go and queue up at the Park entrance – early! The camp ground hosts at the various camps radio to the entrance, when they know of an incipient vacancy, and these are handed out to those in the queue. Very much a pot luck scenario – one takes what one is given! The info lady seemed to think that if we were good and early, we’d get a spot somewhere.

Later in the afternoon, went for a drive around to the National Park, and looked at the various camps that had generator areas – not all did, and we would need one, in case the solar input wasn’t enough.

We decided that we’d find the Lakeside or Ned’s camp grounds ideal.

Had a text message from M. She’d collected her mother from the plane in Darwin, and all was well, so far.

It was warm and sunny again.

We drove into Exmouth, so John could phone the accountant about some tax matters. Despite our new mobile phone, there are no signal bars around where we are staying.

I phoned a dentist in Carnarvon. Over the past few weeks, had become increasingly concerned about a loose filling in a front tooth. I am not sure it will last till we get home. But I could not get an appointment, so will just have to be careful.

There was a phone message from my aunt in Tasmania, to say that dad’s youngest brother had died. Sad – he was the uncle we bowled with, when in Devonport a year ago.

We had a pig-out on a high-carb lunch from the bakery, but it did not make us feel any better.

We drove back around past the caravan park and south into the Cape Range National Park, and on to the Milyering Visitors Centre. Got some more information about snorkelling there and found out that at least some exploring around Turquoise Bay should be safe enough.

We continued south to Turquoise Bay. It was just as beautiful as the name suggested.

We walked on the beach there and watched snorkellers, and decided that we would come back tomorrow and do it ourselves, since we’ve bought the gear. Somewhat unfortunately, I think, the Turquoise Bay Drift is now very much on the Britz hire-car backpacker circuit.

Then we went on to the Oyster Stacks, then Sandy Bay, where John had a fish – no luck. There had been great schools of whiting at Turquoise Bay, which of course, is a Marine Sanctuary, so no fishing there. John says “not fair”!

I did a long beach walk while John fished, I do so enjoy my beach walks, and will miss them when we are home and distant from same.

It was late afternoon when we drove back and there were lots of little kangaroos by the road sides. I have never seen so many beside roads. We had to be very careful and drive slowly.

For tea, John had the accumulated fish catch. I had a tin of tuna and some salad.