Well, my grand solution for the cafe did not work out so well. H had resigned!

I came on duty on Monday morning, to find all hell had broken loose. Yesterday, Boss 1 was in one of his worse moods, and had prowled around the kitchen, being negative and difficult. Showing his true colours, for the first time, to H.

This morning, H started at 7.30. Boss was checking everything out. He found a little – almost microscopic – piece of slimy capsicum, in prepared salad, and promptly threw the whole large container of same in the bin. With words. That was the last straw for H, who had not had a comfortable day yesterday. She said she would serve out a week’s notice, but would not work with boss 1, only with me or boss 2, or on her own.

I had lasted months – she did not even manage a few days! The nice man she thought she knew was not the reality.

I think the three of us probably did not do anyone a service, by putting up with the crap dished out by the boss. Just led him to think everyone would be as immune to him as we were. Not everyone could just find him pathetic and rather amusing, and not take him personally, the way we did. Several times, John had challenged some of his more outrageous instructions, and stood up to him, saying if boss didn’t like it, he could sack him – and of course, that did not happen.

Boss now had to try to smooth things over, because he really wanted D to do the building work. It looked like D would stay long enough to do that, and H would just veg out at their camper, once her week’s notice was up.

I just hoped this would not affect Boss 2’s holiday plans. But not to the extent that I was prepared to reverse our decision to leave!

About 8.30am on Wednesday morning, in the aftermath of all that, H was in the kitchen with me, in tears over the issues with boss. He had been in such a bad mood that he’d stormed out of the kitchen and promptly had a confrontation with B. So she was in the office corner of the cafe, sobbing her heart out. I was slicing up a particularly strong batch of onions, so had tears streaming down my face. A customer came into the cafe. Despite my tears, I was the only non-upset person around, so I went out to serve him. He could hear two sobbing ladies, and there was I with eyes streaming. He looked very alarmed. I said  “It’s OK, it’s only onions!”. Not sure what he really thought, but he ordered his coffee and went and sat outside, away from the drama. I made the coffee, wiped my eyes and took it out to him.

So things were a bit strained. I did not even try to talk H around – because boss 1 really was horrible to work for – and she was less tolerant of idiots than I was. Anyway, the problem was not of my making!

Thursday was M’s last day. She finished with no fanfare. Friday, she packed up camp and headed off to Darwin, to stay with her friend there. She took our mail to post there.

Eventually, things got lighter, because on Friday, Boss 1 and B headed off to Darwin as usual, for the weekend. That left John and Boss 2 to run the bus group lunch area, and H and me in the kitchen. I was grateful that H was working out her notice. Being solo in the kitchen through the busy weekend lunch period was not something I would have enjoyed!

D, whose original trade was as a mechanic, and who knew Landrovers really well, reckoned our ongoing clutch problem was with the master cylinder. He gave John the name of a good place in Brisbane to source Landrover parts.

When there was time, we had to do all the necessary paperwork arrangements with boss 2, for pay finalization, group certificate issue, and the like.

On Monday, the afternoon was fairly quiet. With H still on deck, boss 2 said we could finish at 3pm and do some packing up of our camp. Much appreciated.

I was quite looking forward to a change of scene, and going back to being tourists. Our three months here had been  – well, interesting would be one way of putting it. And I had loved our camp by the creek. 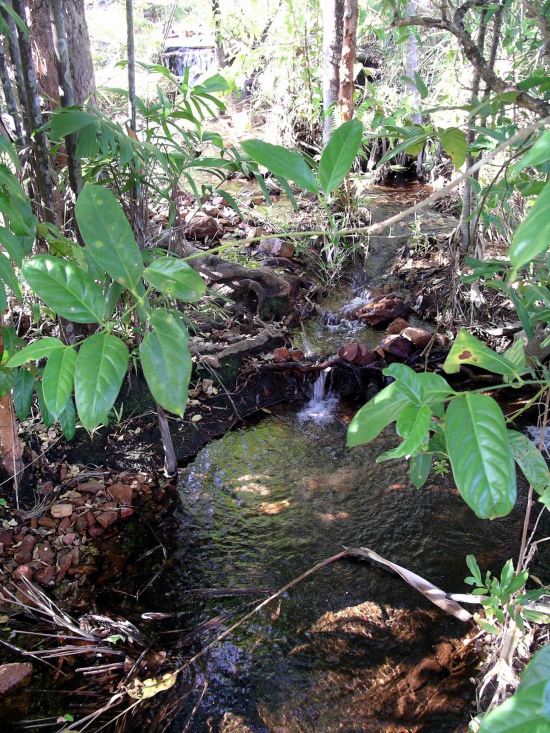