We moved today – not far – only to Woodman Point Caravan Park, just south of Fremantle. This was where we were originally going to be for the Olympics (for good TV), but we had managed to change that reservation, without penalty, to one over the Xmas summer holiday period. Now, of course, we have had to cancel that. So, we planned to stay here now, for five days, partly to use up some of the deposit money we paid, and partly to see what we would be missing over summer!

Before we left, John pulled off the van wheel and checked the brakes – the spring was there!

Then we finished the pack up and set off.

The brakes on the van were NOT working! This did not make the man happy!

I did not find it easy to navigate across the southern suburbs of Perth, with only the Road Atlas map to use.

It was a lovely park – we would have been really comfortable here, over the holidays. 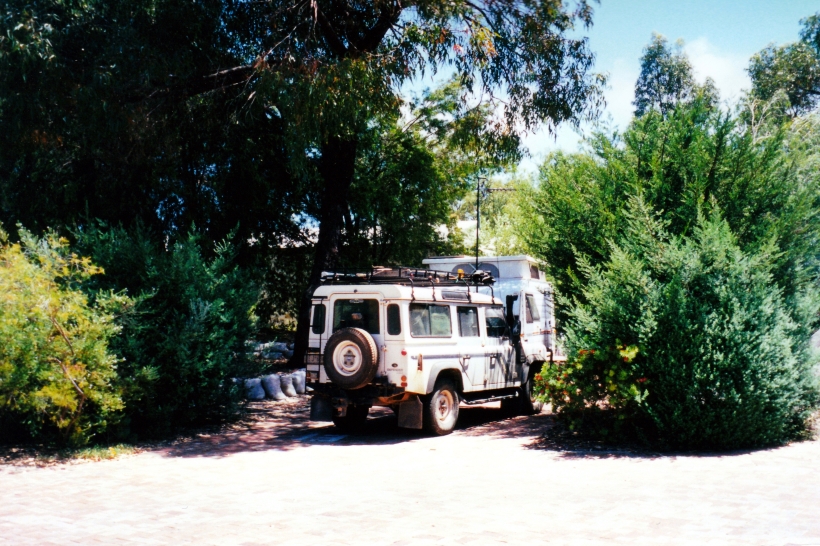 As we were setting up, a man came by and stopped to talk. He had a Defender. He was in the Army in Victoria, and worked on them all the time. He’d bought the new five cylinder one, but plans to go back to one like ours – low-tech – due to problems with the computers in the new ones.

He told us that the wheel bearings can be greased, and gave John some hints about that. He suggested that we contact the customer service boss for help re the repairs and compensation for the bearing problem we had fixed in Broome.

We had lunch, then went into Fremantle. Picked up our mail there. Bought calendars – WA scenery ones – for Xmas presents. Bought a share market book for me and a Harry Potter one for John. I put films in for processing.

We went to Harvey Norman to look at fridges and get an idea of what is available these days.

John got back under the van again. He found the spring was out of its cup – wonder what bump did that? The bushes were gone on a shock absorber and that was worn.

On the advice of the park people, he decided to get a mobile van repairer to come.

John was really unhappy about the things that need fixing. Bits breaking down and wearing out were making him depressed!

The mail had several lovely personal letters from friends.

Tea was chow mein and rice.