I did three loads of washing in the morning. It was quite a windy day, so good for drying.

We went into town and did a grocery shop, in preparation for a few days with limited available supplies.

The Chescold fridge we used as a supplementary one, outside the van, had not been working for a while. John had conferred with the local fridge repairer, who had organized for a new element to come in the mail, by plane. He then brought it out to us – great service. So today, John fitted it – the fridge was working again and John was quite pleased with his efforts.

Later in the afternoon, we went fishing. It was very windy and chilly out on the Thevenard Jetty. The little cockles John had gathered on the beach, the other day, proved to be too soft and small to work as bait, but John caught a garfish and that became bait. He caught a good sized whiting and a small Tommy Ruff, but overall it was a frustrating effort.

I kept a very close watch out for my scary seal!

We did some preliminary packing up and, of course, I picked in the dry washing and dealt with it.

We were as ready to go, as was possible.

Another day of travel.

Fine weather. Good roads. Not much traffic, despite it being school holidays in Victoria.

From Hay, we travelled to Goolgowi, then north up the Kidman Way that we’d travelled before, through Hillston and Cobar to Bourke.

We reached Bourke in the late afternoon. Accommodation was another caravan park cabin. We had decided we’d not be setting up the tent for single nights, when there were other options available! Besides, the nights were cold!

Tea was meant to be cold meat and salad, but John decided he wanted a bacon and egg toasted sandwich. That was alright – we had all the ingredients to hand.

When we travel like this, the Chescold fridge gets unloaded from Truck and put onto 240v power in our accommodation. We don’t have a 12v connection for it in Truck. It stays cold all day without being turned on. Just have to make sure that when it is being moved out again, we turn it off 10 or 15 minutes before moving it, to allow the electrical element to cool down. A fridge mechanic somewhere once explained this makes the element last longer. 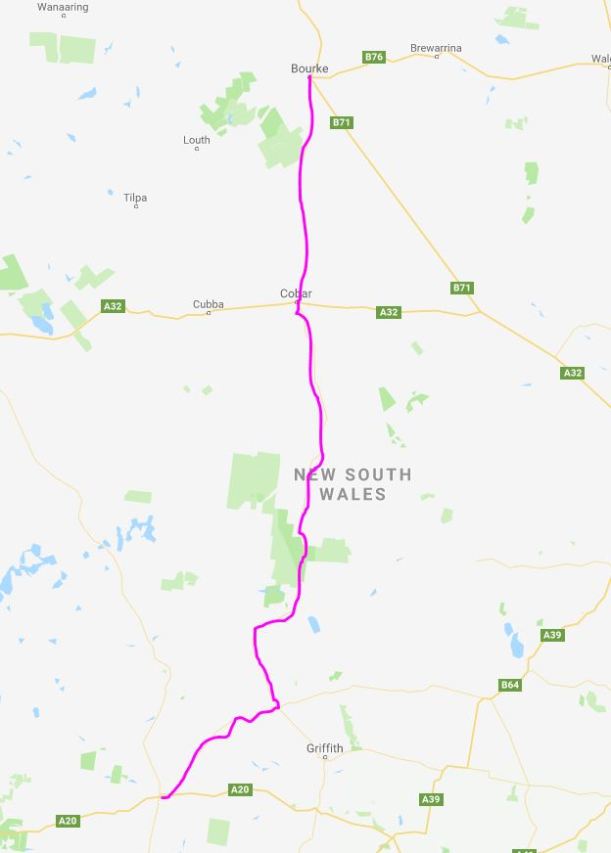 Today was a bit less hot, but turned into another lazy day.

The Chescold fridge died – stopped working at all. It would appear to be the electric element that has gone kaput. It has been such a great work horse here, sitting outside the van, keeping the drinks cold in this relentless heat.

Tea was roast chicken and the usual vegetables.

Had a lovely long phone call from John’s cousin M, who was interested to hear of the progress of our travels, since we’d last seen him.

It was another hot day. We decided last night to stay an extra day here, because John wants to visit a local attraction.

Our breakfast entertainment was watching the mob next door try to get the machinery going. It took them a couple of hours, due to all the flat batteries. I wonder how many times a week this charade is repeated? Surely whatever authority gave funding for this venture could also have funded some training?

I did a load of washing – there is a machine provided at the back of the shop/office. It cost $2.50! But we have clean clothes again – they dried well in this heat.

We walked a bit around the town, but were not game to go far. There is a CDEP program of sorts it seems – saw some locals doing some cleaning up work.

We sat in camp and watched the kids come out of the nearby school for lunch – a number walked through the campground – all aboriginal. Some were very tardy going back, and seemed to have had a lolly lunch.

After lunch, we drove out to Charlie’s Mine and bottle house – which is what John wanted to see. Charlie is a Maltese migrant, a game little battler. He has been battling the Shire and the government for years, over whether he can mine his lease for gold. He is developing a tourist attraction and campground in an attempt to get round the regulations. Officialdom says his mining operations release natural arsenic into the water supply of Coen. Charlie says the town dam is naturally contaminated. He showed us round his place, took us into his house constructed largely of bottles – which is quite well done, in parts. He pressed coffee upon us. The mugs were a very long way from clean – and I decided it was definitely advisable to drink it black! He now insists he is excavating a dam for his water and recreational needs – not mining! We were at his place for a couple of hours.

Charlie said the local shopkeepers exploit and live off the aborigines and that they oppose things that might affect their wealth e.g. a bakery being set up. They can get away with charging $5 for a loaf of bread in the Wet season. There are no public toilets – the publican vehemently opposed the building of same – because then people will use the ones in the pub, and feel obliged to buy beer. I suspect some people are not Charlie’s friends!

The camp ground had filled up by the time we got back and we now have neighbours on both sides. I spoke to some people heading south. They had gotten bogged on the Iron Range track yesterday – there has been much rain there in the past few days.

I also heard another traveller, who was in the repairs queue at the garage, talking of how he’d lost control of his vehicle and camper in a big dip and was lucky not to roll the lot. He had bent some bits and broken others, so needed repairs. He admitted he was going “a bit fast” (well, that was obvious!); there was traffic coming the other way and he did not want to stop and wait for them to negotiate the dip, so speeded up. Brains in action!

Looking at the repair line, it seems to me that most of the vehicles are awfully heavily loaded – full of gear, boat on roof, several people, towing campers. It is not surprising they break things in these conditions – and we haven’t even gotten to the hard parts yet.

John was browsing in Moon’s guide and found a place he really wants to go – the bush camp at Silver Plains, to the SE of here. I am not really keen on the idea – it seems very fishing oriented – but I guess it is good that John is getting involved in trip decision making. He phoned and booked us in.

I felt queasy for much of the afternoon – the effect of being around Charlie’s ultra strong cigarettes? Town water? Charlie’s mug? I bought some tonic and soda water from the pub – that did make me feel better.

When I was getting tea ready, a nearby camper came over, and asked what I thought of the Chescold fridge – which was in the open in plain view, of course. I said it was great. He’d bought a second hand one for this trip and it did not work properly, so he’d spent money having it “fixed” in Cairns, and again in Cooktown. It still was not working and he’d just thrown out $36 worth of “off” meat. He was not happy. It turned out he did not know that it had to be level to work well. We helped him level it up, using the tiny spirit level we carry with the fridge; (next morning his fridge was super cold and he was even more annoyed about the “repairs” he hadn’t needed at all).

I tried to phone K – got the answering machine; left a message for him about our Silver Plains destination. Whilst I was waiting in the queue of tourists for the single phone, got chatting to a man from Melbourne who is in the home tutor relief scheme. They pay his fuel to get to where he is helping out, and keep is provided by the users. He’d been six weeks at the guesthouse across the road. It is the lady’s busy season, so she uses the scheme for her kid. He said the local school was no good for white kids’ education, so they do School of the Air, or go south to school. It was a return visit for him – essentially the scheme pays for his winter holiday in the north.