John went to the park office and found the number for a dentist in Griffith – there was none in Hay! We had not actually intended to go through Griffith, but…. John phoned the dentist. He had no room to squeeze an appointment in for him in reasonable time. John tried to phone another one in that town, was told they would check and call back. They didn’t.

I twisted the ankle on my good foot, this morning, stumbling on some uneven ground.

I used Sensis to get some different dentist contacts in the areas we would be going to. Found one in Charleville, but when I phoned, found there was only an emergency dentist there now and there was no hope of a transient getting in.

Then found one in Mt Isa, where we were able to get an appointment for next Monday. So we would be detouring to the Mount, instead of turning north at Cloncurry, as usual. Well, that would be better than a side track to Griffith, anyway, and the tooth repair would just have to wait a few days.

I came to two conclusions after this exercise. One was that Telstra sucks, for eliminating the old, friendly, Directory Assistance, and replacing it with Sensis. I bet the charges would be high for my efforts today. Secondly, the bush was very badly served for dentists!

It was a long day, but it was nearly 10am before we left Hay.

It got warmer through the day. Some cloud developed later and it was actually a bit cooler between Cobar and Bourke.

We found a good roadside stop, about 100kms south of Cobar, to stop and eat our packed lunch – at Gilgunnia.

There was some roadside water lying about – there had been rain, in recent weeks, through these parts.

At Cobar we debated whether to stay there, or press on to Bourke, a further 170kms. John wanted to go on and, in the end, I was pleased we did, now that we must reach Mt Isa in four days.

Continued on to North Bourke and booked into Kidmans Camp. $22.

The clouds that had developed led to a very pretty sunset. We sat out on the lovely grassed area outside our van and watched the sunset. It reminded us of happy hours at Pungalina, last year.

At shower time, John discovered he didn’t pack his soap container – or soap! It had taken him a week to find this out??

Today saw the usual, routine, trip north through the centre of NSW.

As the day progressed and we moved further north, it became drier and hotter, and more monotonous – but only because it was a route we had done before. 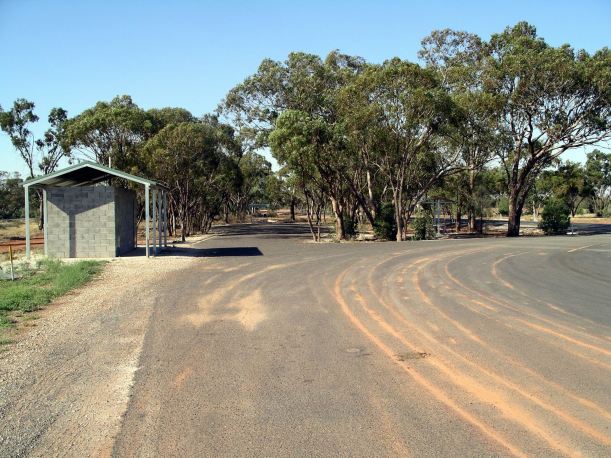 Excellent rest areas in these parts

Had a brief stop near Hillston for a leg stretch, then ate early lunch at the rest stop at the Lachlan River Crossing. Bird watched there and had a reasonable break.

Plenty of room by the Lachlan River

It was mid afternoon when we reached Bourke.

Went into Kidmans Camp Caravan Park at North Bourke. $22 for the site. We always enjoyed coming to this place – lush green grass on the sites, excellent amenities, interest in what developments had been made since last time we were here. We have seen the place grow from its early days.

Set up for the minimum overnight stop, then walked down to the Darling River, which borders the property. Wandered about down there for a short time, then relaxed sitting outside the van for the remainder of the afternoon.

We left the park about 9am.

The day was somewhat hotter, as one would expect, heading north and inland. It was even a bit uncomfortable for travel, by the time we reached Bourke

There were a lot of trucks on the road, between Narromine and Nyngan. This stretch is part of the main route from Broken Hill to Sydney, so I guess that explained it.

Mostly, it was an uneventful drive.

We stopped briefly at Nevertire – a tiny village – for me to take a photo. The name symbolizes my attitude to travel, but apart from that, I thought it featured in a bush poem – maybe one of Paterson’s?

Morning tea was at Nyngan. I used hot water from the thermos flask I carry in Truck, to make our tea and coffee, and cut a slice of fruit cake – not home made – for John.

Nyngan had obviously declined from the town it once was; some rather nice old buildings were now semi-derelict, including an hotel. But the town had created a very pleasant rest area in its centre, and there was a second one, too, just on the edge of town by the Bogan River.

Until after Nyngan, we had been passing through a mix of cultivated and grazing lands, but after this, gradually, the crop lands decreased. Closer to Bourke the country was clearly more arid, with areas of mulga scrub appearing and occasional bare red earth patches. Although, on the map, the road from Nyngan looked straight and potentially dull, it was in fact slightly undulating and with little hamlets at intervals – and thus, interesting enough. It was a rather narrow road, though.

We had our lunch of sandwiches I’d made this morning, in a rest area in the bush.

In Bourke, went straight to the fuel depot and got diesel – 90cpl. Having been here a couple of times before, know our way around the place, a bit, now.

We went then to the supermarket. It is now a new IGA one – with a heavily fenced carpark. There was a security guard manning the entrance. The new building had no windows – only a pair of doors, with a roller security screen that comes down and covers these, after hours.

I found the shelves were very sparsely stocked, with many open gaps. But they had the frozen battered, oven bake fish that I wanted to get for tea. John selected some indulgences – crisps and the like!

Later, a fellow camper was telling us that he had witnessed a ruckus there, involving a local girl, who was yelling that she had been cheated at the register. The camper had gone in to get some alcohol, (it was a licensed supermarket) and been surprised to find that the public was not actually allowed inside the alcohol section. One had to ask at a cashier’s window for what they wanted, and it was passed through, after payment. He seemed to think that this arrangement revealed much about the nature of the town.

Business completed, we drove out to North Bourke, across the bridge over the Darling River.

Booked into the Kidmans Camp caravan park. This was a relatively new park that we hadn’t tried before – mainly because we didn’t know it was there, until we passed it, driving north, in 2000. Our powered site cost $16.

Kidmans Camp was a very pleasant place to stay. The guests seemed to be a mix of tourists and short term itinerant workers, here to work on the orchards or the cotton farms that have grown up around Bourke, reliant on irrigation water from the Darling.

It was a hot afternoon, and after a minimal set up, John needed an afternoon nap. I went for a wander around the park. Then I had a shower – the almost new bathroom was very nice.

I cooked fries to go with our fish – all cooked in the electric frypan, outside the van.

After tea, we got talking to a man in a camper van that was set up next to us. He was travelling on his own. His talk indicated that he’d had an interesting life, having been n engineer and a helicopter pilot, who lost much of his wealth in the ’87 share market crash. We were not talking at all loudly, but a man in a tent, two rows behind us, demanded that we be quiet, because he had to get up and work in the morning! 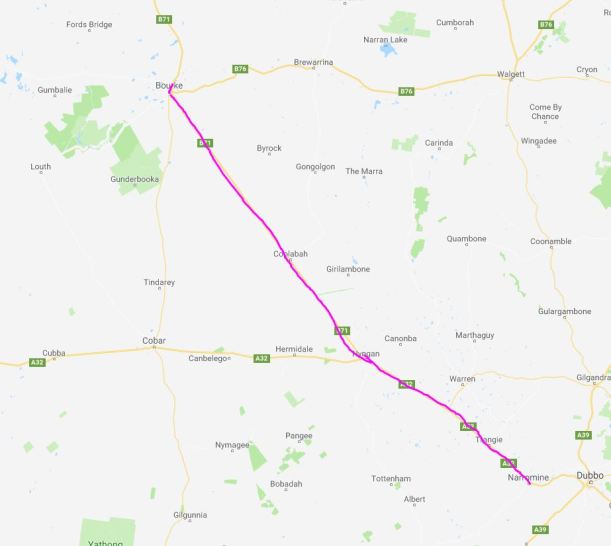 Another day of travel.

Fine weather. Good roads. Not much traffic, despite it being school holidays in Victoria.

From Hay, we travelled to Goolgowi, then north up the Kidman Way that we’d travelled before, through Hillston and Cobar to Bourke.

We reached Bourke in the late afternoon. Accommodation was another caravan park cabin. We had decided we’d not be setting up the tent for single nights, when there were other options available! Besides, the nights were cold!

Tea was meant to be cold meat and salad, but John decided he wanted a bacon and egg toasted sandwich. That was alright – we had all the ingredients to hand.

When we travel like this, the Chescold fridge gets unloaded from Truck and put onto 240v power in our accommodation. We don’t have a 12v connection for it in Truck. It stays cold all day without being turned on. Just have to make sure that when it is being moved out again, we turn it off 10 or 15 minutes before moving it, to allow the electrical element to cool down. A fridge mechanic somewhere once explained this makes the element last longer.

Refuelled at South Hay, after a reasonably early start. 87cpl.

I posted K’s birthday card and cheque in Hay.

The weather was getting warmer as we went north.

We travelled NE to Goolgowi, then north to Hillston. My road atlas showed that the route north from there, through Cobar to Bourke, was not sealed, but we decided to try that way as being the most direct for where we were aiming. We were pleasantly surprised to find that the newly named Kidman Way was also fairly newly sealed – all the way. It was a very good road, with very little traffic. So much better than battling with truck traffic on the Newell Highway.

We had a lunch stop by the Lachlan River, just north of Hillston.

After the flat Hay Plains, the country north of Hillston became more wooded and interesting to drive through. It was quite green, with much grass and surface water lying about.

We did not stop to explore Cobar, being focussed on getting to Qld. It was obviously a mining town but seemed to be rather languishing, from the little we saw as we drove through and stopped briefly for fuel – 93cpl.

After Cobar we were in mulga scrub country.

In Bourke, checked into the Bourke Caravan Park, taking an ensuite site, for $18. We did a basic set up. The site was quite adequate.

We had not been very impressed by Bourke as we’d driven through to the caravan park. There were numbers of indigenous people wandering about, battered and graffitied  houses, with boarded up window spaces. I was shocked to see how many businesses had bars over their windows.

We drove to get the night’s fish and chip tea, having been advised to do so by the caravan park lady, rather than walk the relatively short distance. Given what we’d seen already, we certainly did not feel like walking for exercise, here.

The fish and chips were alright.

Later in the evening, there were two green frogs on the partition outside the van. I thought they may have come out of the hollow upright poles, and were feeding on insects attracted by the nearby bright light. Very cute – I love frogs!

J phoned K. The tenant had found the tools. K would bundle them up and parcel post them to Rubyvale.

So, here we were at the legendary Bourke. I would have to say it was a let down, because of the obvious issues of the place.