Despite yesterday’s reassurances, the fire to the north and east was now causing concern.

There was no possibility of anyone leaving now.

All us rigs camped along the cliff tops were asked to move from that area to the grassed, powered central area – as it would be easier to defend! Hmmm….

So we packed up camp and relocated to the rather crowded grass camp area, finding a place where we could keep the van and Truck hitched up. M was nearby. We were told we could hook into power – at no extra charge. That was a nice touch. But we were not to try to use anything that drew much current – I guess they had more rigs than usual hooked up to the system. We did not put up the awning.

Many campers filled water containers and had them at the ready. This was feeling rather too serious. There was an air of tension and worry now.

Then the Fire Service helicopter flew in again and landed on the grassed area by the camp kitchen. The fire person  said he still thought we would be alright, here. He said the fires were cutting the access track out, so there was nowhere to go, anyway.

The fires burnt in the middle distance, all day. It was quite smoky.

For something to distract us, played bowls, in the afternoon. Nero fiddled while Rome burned; we bowled while Barn Hill burned…..

We were joined on the green by a solo lady traveller, who hailed from Bendigo, in Victoria. She was exploring, in loose tandem, with another single lady. They both had camper vans.

I decided to walk back across to the ablutions block in the unpowered area – quite a distance away – for my afternoon shower. No one else seemed to be bothered to make the trek over there, even though the block in the campground was a bit too small for the numbers packed in here now.

I came out of the shower, and a snake that had just come out from under a nearby bush, did a fast u-turn and retreated back into the scrub. I didn’t know what type it was – only had the impression that it was a grey-green colour. Not sure which of us got the bigger fright.

Bendigo lady and her friend joined us for happy hour drinks. I put together some dry biscuits and cheese, for nibbles, and she brought across a plate of Chilly Philly cheese and biscuits. A very pleasant interlude, with much travel talk, including speculation about when the roads out of here might be safe to travel again.

In the morning, it was very smoky.

Some travellers left quite early, including another Trakmaster that had been here. They told us they did not want to risk their van by staying. We actually thought that leaving could be more of a risk, as there seemed to be considerable doubt about the place, over the exact fire locations, in relation to the track out of here and the Highway. I thought that people leaving ran the risk of being caught between different arms of the fires.

Late morning the distant sounds of helicopters became closer, then a Fire Service helicopter appeared low from the east, and landed at the perimeter of the camp ground. We were immediately apprehensive that this meant an immediate evacuation order. Instead, the fire person said we were all ok here. That was reassuring. Some visitors asked if they were better off leaving, but he simply reiterated that it was safe here. I guessed they had to be a bit careful what advice they gave.

We did a walk on the beach, but mostly stayed around camp. It was too hot and smoky to spend too long on the beach. The constant smoke we were breathing was giving us all slightly sore throats.

John did some more camera experimenting as we walked. He was happy with the results he was getting.

I spent some time downloading photos onto the laptop, and sorting and naming them.

At night, the fires seemed much closer…..

John slept in. After my breakfast, I went into Halls Gap for the Sunday paper. Met daughter and partner there. They came back to the park, to say goodbye to John, and to have a look at what the park was like, for  future reference. This time, they had been staying in a cottage in the township.

We went driving. Up to Boroka and Reids Lookouts, then to Roses Gap, Wartook and back to the van. All that way was through burnt country.

Almost half of the National Park was burnt. It would be a long time before access was open again to many of the best places.

White posts marking the road sides, and the road signs had melted, or were indecipherable. All the walks in the area behind Halls Gap were closed; tracks would have to be cleared of debris, signs and railings rebuilt before they could be re-opened. It would be a massive job. 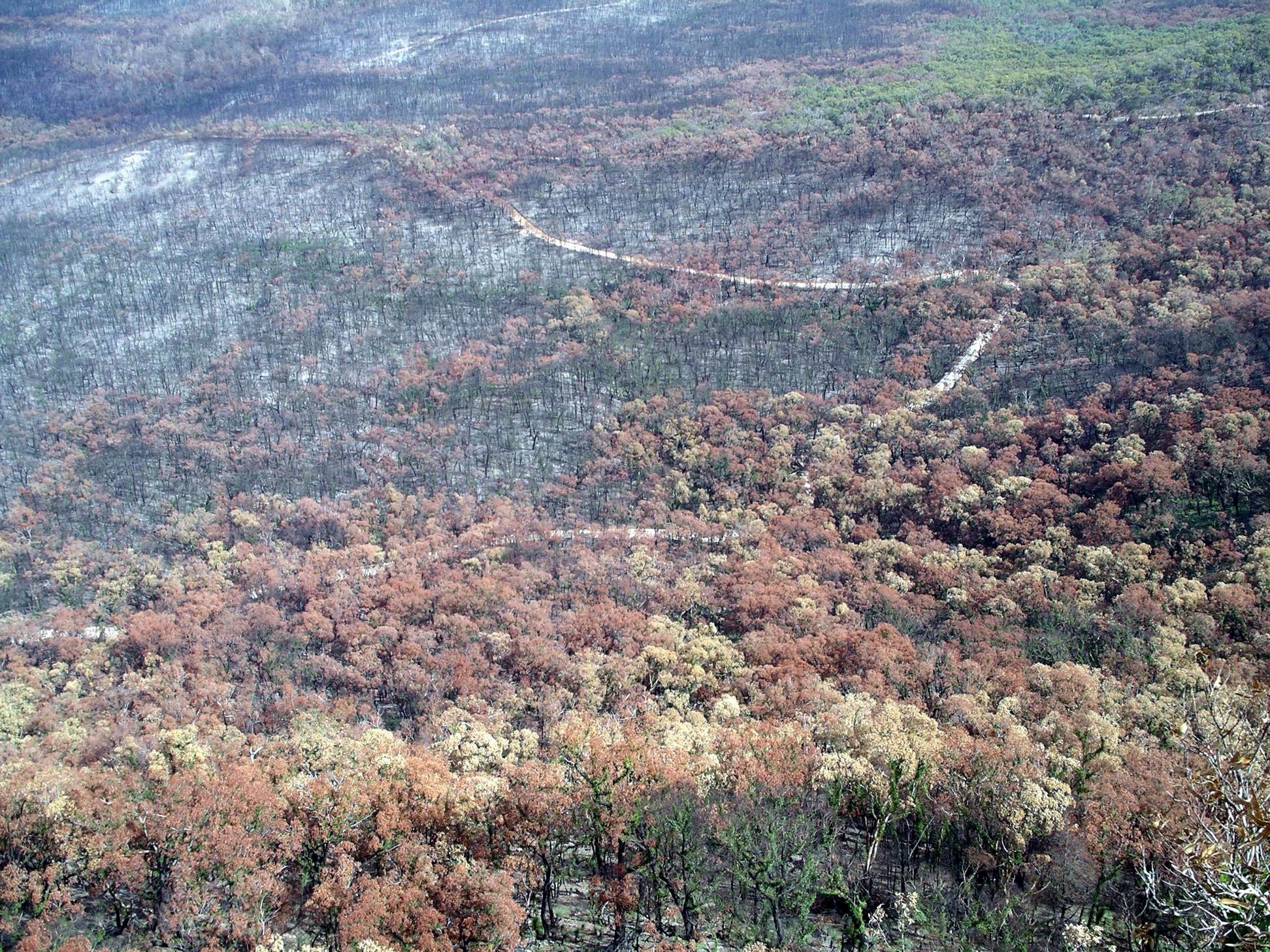 The view from Reids Lookout showed the devastation in the central Victoria Valley. That was country I had regularly hiked and camped in – impossible to visualize it as the same lush, green, beautiful area I had known. 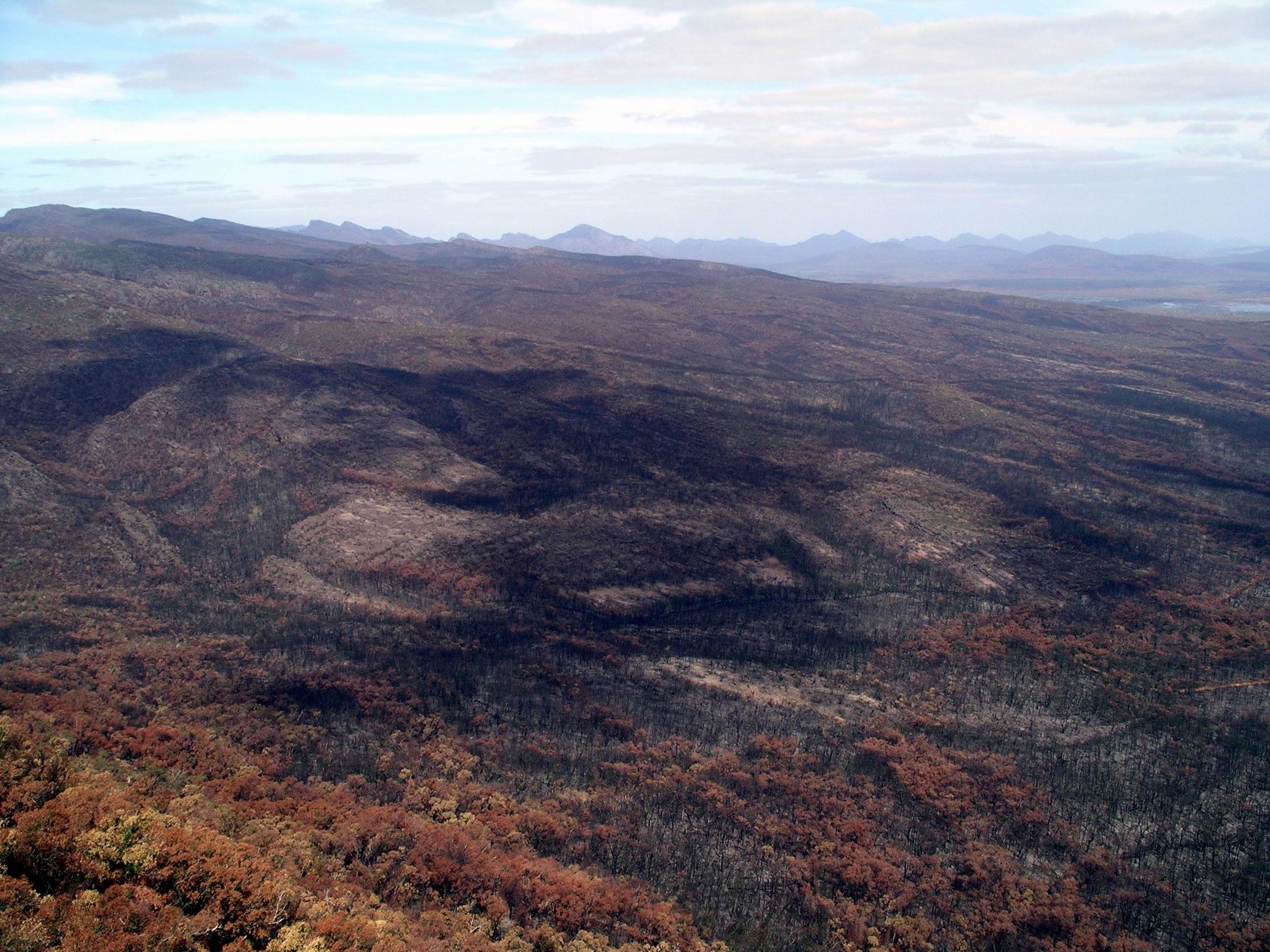 We would not be sorry, tomorrow, to leave our neighbours in the next van. They had three whinging, wailing young children. They kept their heating system on all night – it started up every five minutes or so, and ran for a couple of minutes each time. It was most noisy and annoying. All I could think was that such inconsiderate adults deserved such horrible children!

It was a chilly day.

After breakfast, we drove into the Halls Gap village. The evidence of the fire impacts were all around.

Fire burned along the ranges, each side of Halls Gap

At the newsagent, where I’d gone for the papers, we encountered daughter and partner. The shop also stocked  tourist oriented items. I bought a heap of post cards – mostly to add to the stock that I use when remote, to regularly send to the grandchildren.

John bought polo fleece jackets for his two grandsons – a small koala one for the boy born last year, and a larger kangaroo one for the three year old. They had hoods with the appropriate ears and were really cute. We hoped they were a hit when they reached Brussels.

There were not a lot of people in the village, considering the time of year, and the weather.

We wandered up and down the main – only – street. Although still small, Halls Gap had changed a lot since I used to regularly visit, back in the 70’s and 80’s. Somehow, it seemed more developed. And the new aboriginal display/information centre had been built.

After lunch, went for a short drive down the Dunkeld road. We were not feeling very energetic.

It was sad that none of the popular tourist walks and attractions were yet open, after the fires. The village could certainly have benefitted from the tourists that would only come in numbers when there were things for them to do.

Once was a picnic table and bench seats

The extent and ferocity of those lightning-started fires was quite awesome. They burned for a couple of weeks and extended across all the best parts of the Grampians. Halls Gap survived, but it must have been really frightening to have been in the village during the fires. 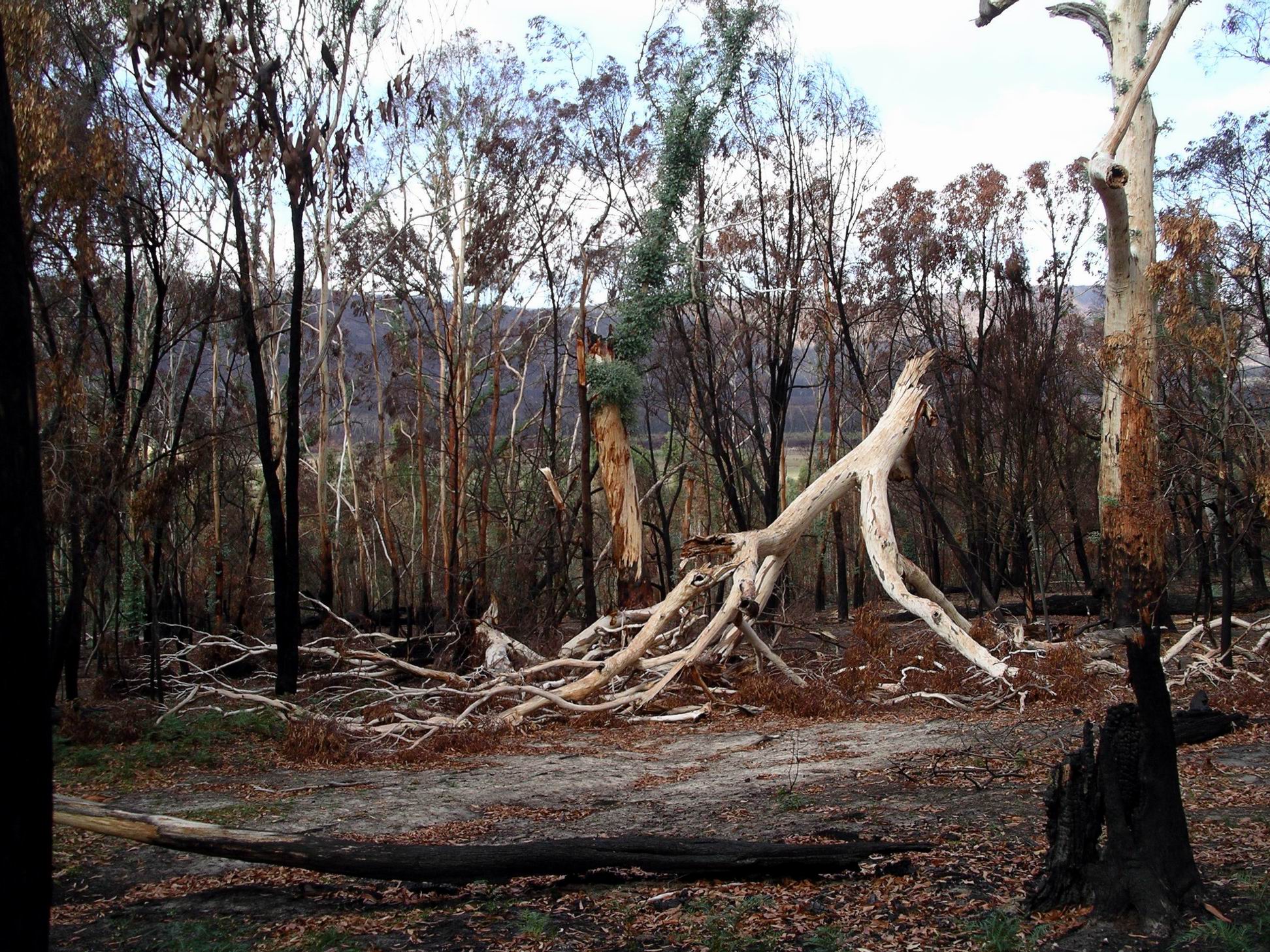 There was already evidence of some regeneration of eucalypts, and of course the opportunistic bracken fern was regrowing. 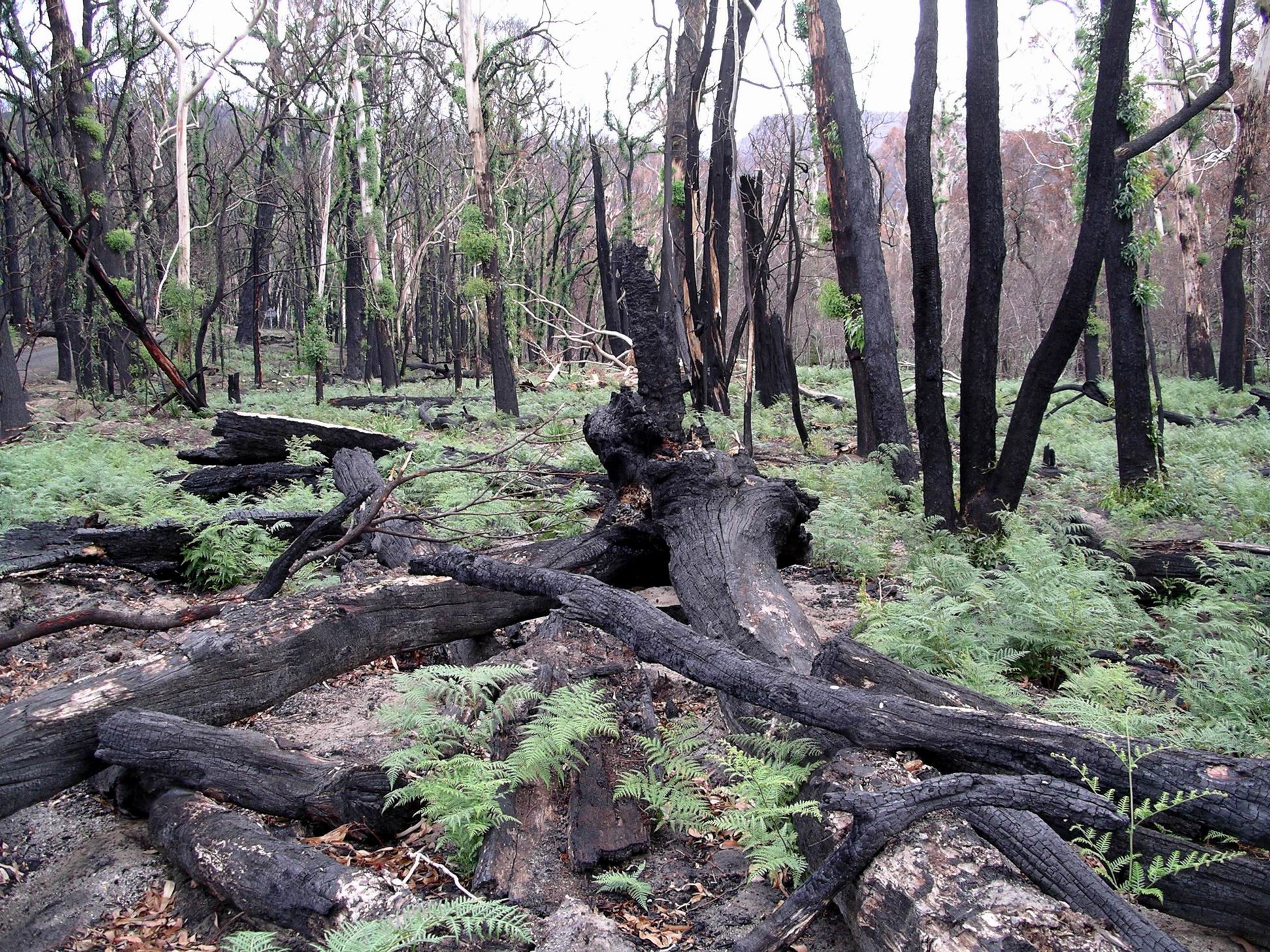 John kept remembering stuff he had forgotten to pack. This year’s had definitely been his most disorganized departure.