After breakfast, wandered about some more, exploring the place again.

It was quite humid.

Over the Wet Season, R had built a hut in the tent area. It was a prototype to replace some of the older tents, and looked quite good. That was what the new curtains were for.

They were getting two more four room dongas by mid-year. These would be going into what had, until now, been the area for bus group camping. With four bunks per room ,they would accommodate thirty two people. They would be for the weekly Desert Venturer backpacker bus Saturday/Sunday visits. This company was doing a Cairns to Darwin bus trip, once a week. It was obviously a solid enough booking to warrant the expense of the new dongas. They would be able to be used for other guests who wanted that basic accommodation, Monday to Friday.

The booking in work at Reception was getting more complex all the time!

The rest of the tent accommodation was currently being put up by the working staff. There were some nice new ones. About time, I thought. Maybe there would now be less work repairing zips and torn thin fabric. 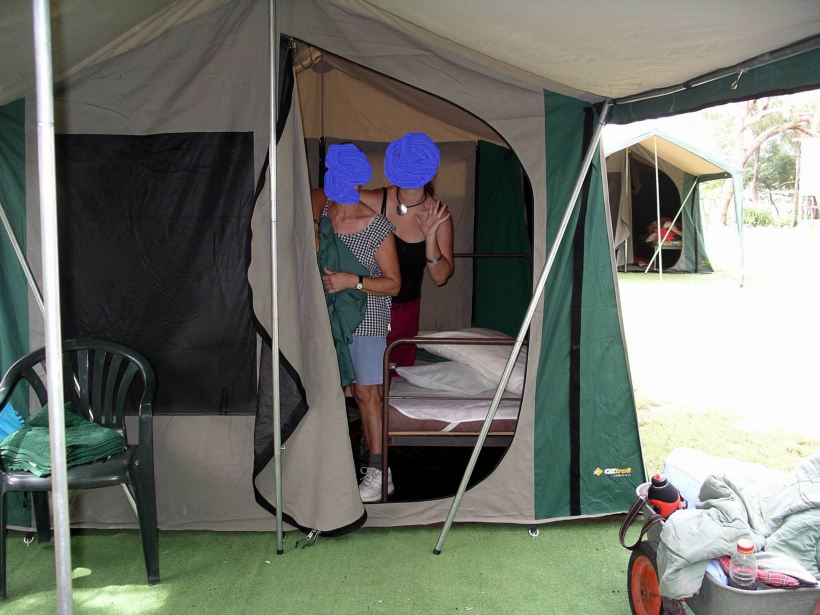 Setting up the tent accommodation

There were two new Maytag washing machines in the laundry, and a proper commercial dishwasher in the kitchen! These should make life a bit easier for staff.

Looking over to the dining deck. Former kitchen to left – now camp kitchen.

The toddler of the place was acting up. Maybe due to the new baby, I thought. He was being rather rough and noisy around her. The boss would not know herself when she had a proper house, rather than one room for them all!

At tea time, there were more staff than guests, so the associated tasks were not onerous.