During a chat yesterday, O had mentioned that one job he had to do was to move three canoes upriver, to below the Escarpment, so guests could paddle on the long, wide  water hole there. Or, they could paddle further upstream and look for the Surprise Falls.

We said we would be able to help him with that. Or – to be more accurate – John volunteered “my ladies” and himself! We all knew how to paddle canoes.

Before the craft could be moved, O and W had done a two vehicle convoy out the track to the Escaprment. O left the Troopy there, and W drove him back. Thus, we had transport back after our paddle. 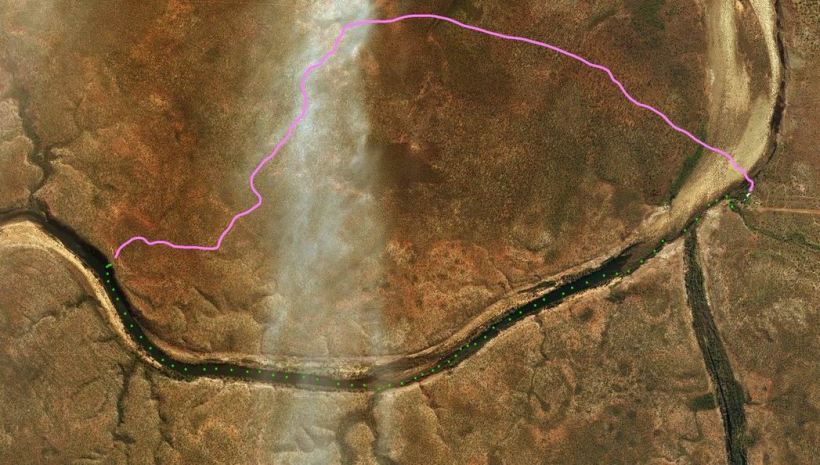 The stretch of river that we canoed – a series of waterholes and shallows. Green: canoe route. Pink: the vehicle track to the Escarpment. (Zoom)

There were three canoes to move – a single, which John would paddle, and two double, open, Canadian canoes. M and I would take one of these and O the other, alone.

O had something to finish at the house, so said to make a start, and he would catch us up. Seemed he thought we would be much slower than him!

The canoes had been lined up on the bank of the Camp Creek, just down from O’s house. It would be easier to get into them there. The little, fast-flowing creek would act like a shute, carrying the canoes down and out into the Calvert River. The creek was really narrow, with bushes and pandanus lining its sides, but O thought it would work alright.

M and I helped John get settled into his canoe, then gave him a good push off, to get him started in the fairly shallow water. He didn’t help us much, in fact, seemed to be resisting our pushing efforts. He was calling out something, but we couldn’t really hear him, over the noise of the rushing water. We persisted, and eventually the current caught hold of him and he disappeared down the chute.

We got into our canoe and managed to push ourselves off, following him down and out into the open water.

John was waiting for us and was very annoyed. He had been yelling at us to stop pushing him into the chute, because he could see that there were lots of spider webs across the little creek! He had burst through them all – golden orb and St George Cross spiders. These hang about in the centre of their webs, so his face was about at their level as he broke through. Fortunately, he was going fairly fast. By the time we reached him, he had brushed the collected ones off himself. But he was not happy! By contrast, we had not encountered any webs, or spiders. He had done a very effective clearing job.

The Calvert at this point is virtually a pool between rocky sections, and fairly narrow, so it was not long – only a couple of hundred metres – before we had to portage the canoes over one of these sections, into a further fairly narrow stretch. We passed the junction with Karns Creek, on our left, and after some more paddling, emerged into a much wider waterhole section of the river. O caught up with us here. 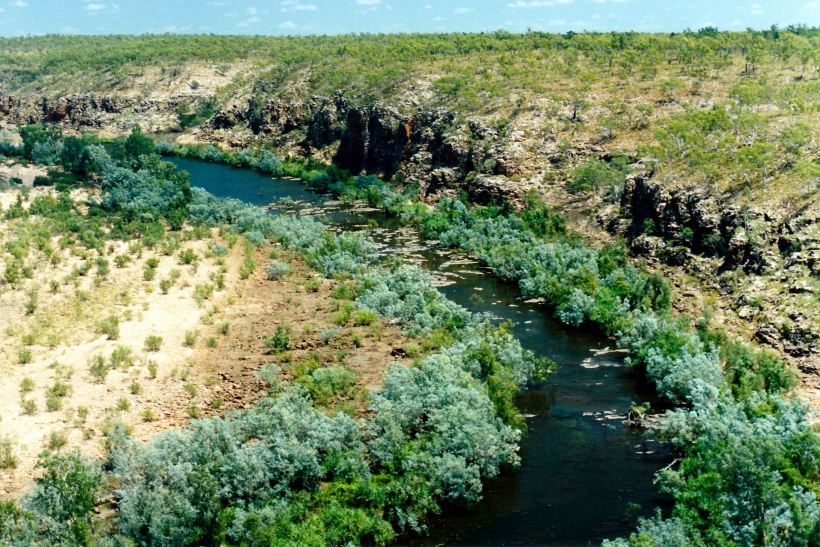 It was rather lovely, paddling on the river. Certainly, the day was hot enough for the splashes we made to be welcome. Having to get out of the canoes into water that could be nearly waist deep, to move the craft around obstacles, was quite pleasant – if we didn’t think about what else might be sharing the water with us. Ignorance was probably of benefit, at this time!

After some time on the broad, deep section, we came to another set of rocks and trapped fallen timber, making an effective barrier. It was still fairly deep, right by the blockage, and I got out of the back of the canoe into waist deep water, to manoeuvre the canoe. M got out the front – it was shallower there.

Later, when we were mulling over the canoe trip, back at the house, O asked me if I had seen the bull shark that came close to me in the water at that stage? Knowing nothing, then, about bull sharks (had never heard of same), I made some sort of flip comment to the effect that it must not have liked the look of my legs! Had I known of their propensity to kill people by almost severing their legs, underwater, I would not have been so casual. If I had also known there were bull sharks up the river there, I would not have been getting out into deep water that way. I had been keeping an eye out for any sign of crocs, but had not even thought of sharks in fresh water. O was wearing his .45 pistol, but I doubt that would have helped much in a bull shark attack!

Hauling the canoe over the last, quite extensive, portage area was hard work and we were glad to get back into the canoes for the final couple of kms, to the place we were to leave them. There was a wide rocky ledge there, with a scramble down to it from the escarpment above. We clambered up the scarp, and drove the waiting vehicle back to the house., and then, eventually, ourselves back to camp.

We left the canoes down below here

The outing had been an exhilarating adventure and we were feeling good.

I had been too wary of the paddle to risk taking my camera, so we had no water-level record of the paddle, more was the pity. However, I was able to use some 2003 photos to illustrate.

A task for the afternoon was to cut John’s hair. Our Honda genset was fired up to power the clippers, the chair was set up in Cane Toad clearing, away from our living area, and away I went.

Over our happy hour beers, we relived the day’s adventure whilst watching yet another glorious sunset.