Day off, except for the garden watering.

Drove out to Bubbling Sands, which was an area of springs, a few kms SE of the Safari Camp.

Clearly, there are in places on the property, limestone formations – hence the caves. Presumably, the various springs that occur are related to this limestone and ground water stored in it, which means the springs flow all year round. Therefore, geologically, the Bubbling Sands would be related to our spring fed creek at the camp.

To reach Bubbling Sands, we followed a track that circled round the outside of the camp area – the same track that went to Croc Hole, on Karns Creek. This track went past an old, overgrown,  air strip, then divided, with the straight ahead track going on to Croc Hole and the right turn taking us to Bubbling Sands.

The presence of springs and resultant creeks was shown by lines of pandanus and other lush vegetation, contrasting to the dry grassland and scrub around them. The creek that was formed from the Bubbling Sands springs drained into Karns Creek.

Bubbling Sands was “different” in that we could actually see the bubbles of the upwelling springs, in the sandy base, through the totally clear water of the pools. It almost looked like there was no water at all, it was so clear. 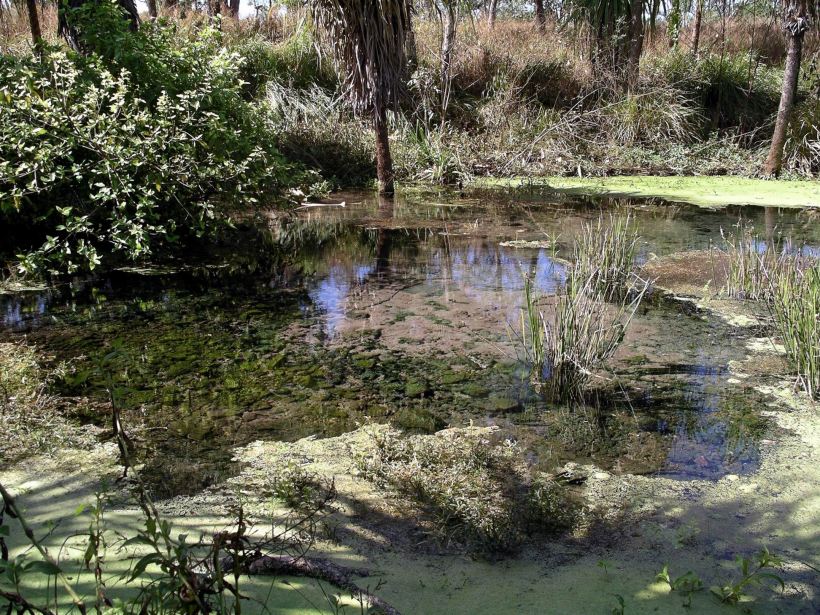 The nearer greenery is actually on the bottom of a metre deep pool! The central brown area was where the water was bubbling up from underground.

There was a series of pools, fringed with bright green vegetation, and with fronds of greenery growing in places in the pools.

Apparently, the biggest of the pools were waist to chest deep, and snorkelling in them was interesting. We decided we must try to do that while M was staying with us.

Spent some time wandering about, exploring and taking photos.

Then drove on, taking the turn off to Totem Pole Cave, which O had earlier showed John. It was not far from either the Bubbling Sands, or from Croc Hole.

The cavers had begun their explorations already, and were active at the entrance hole to the cave.

Cavers at work. One is part-way down the cave entrance.

We wandered about, looking at the stromatolite formations on the nearby slopes.

John found some Black-eyed Susan berries, which we had learned at Adels,  were quite poisonous.

On the drive back to our camp, saw a big wallaroo, standing up tall in the grass, just watching us.