We were up at 5.45am, wanting to get the travel over before the worst of the day’s heat.

Called into the refrigeration place to pick up the Chescold. It was not fixed, as the part did not come on the plane! The man showed John what to do to fix it, so he can get the part and do it himself.

It was a hot drive south. But hooray for the fact that we have left Karratha!

Much of the way was pretty flat and featureless, but there was some hill and mesa country to provide a bit of variety.

We stopped for a coffee break at the Fortescue River.

We had decided to detour from the highway, go have a look at Onslow – which we’d not been to before – and overnight there. Since we were passing by, so to speak. It was a detour of some 80kms from the highway.

John got sleepy about 100kms from journey’s end, so I drove the rest of the way.

We reached Onslow about 12.30. The last stretch, going in there, was rather dreary.

We booked into the Ocean View Caravan Park, where we got an ocean front site, for $18 for the night. It was lovely. We could keep Truck hitched up to the van too. The park was really nicely set up, but the trees had obviously been stripped in the cyclone earlier in the year, and were just recovering.

It was much cooler and more pleasant here than it had been in Karratha.

There were lots of birds about – both sea and land types.

After a minimal set up, and lunch, we walked up the street to have a look at the little town, and checked out the shops. Then we walked along the beach. It was rather rocky and shelly, but still a beach, and much appreciated. Onslow is tucked beside a shallow bay and thus faces to the north east.

Tea was corn cobs and pancakes.

It was wonderful to go to sleep to the sound of the sea, which was very close to us at high tide. 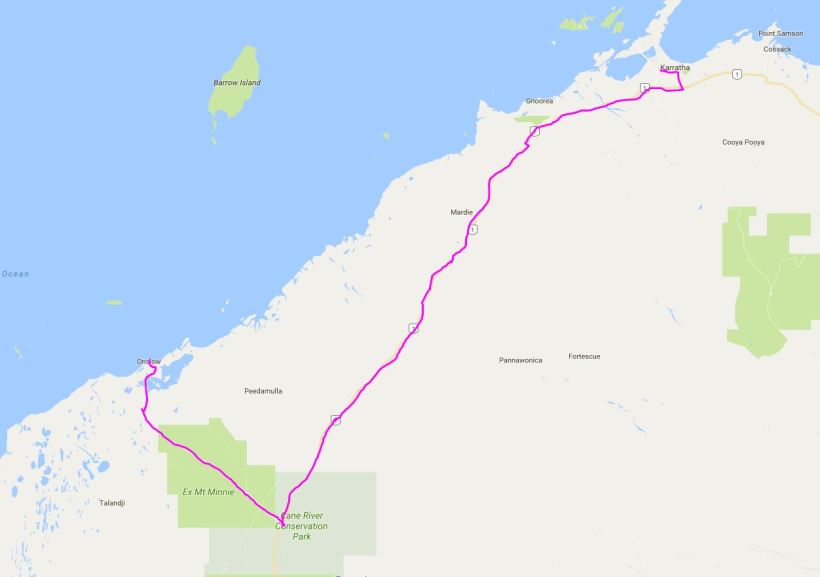