The day was partly cloudy, but the solar panels charged the batteries adequately. This was usually our greatest concern when camping away from grid power.

Our van was just a white speck, high on the hill above the beach

John wanted to try fishing here, so we drove down the beach access track and then along the beach for a few kms, until he found a spot that suited him. 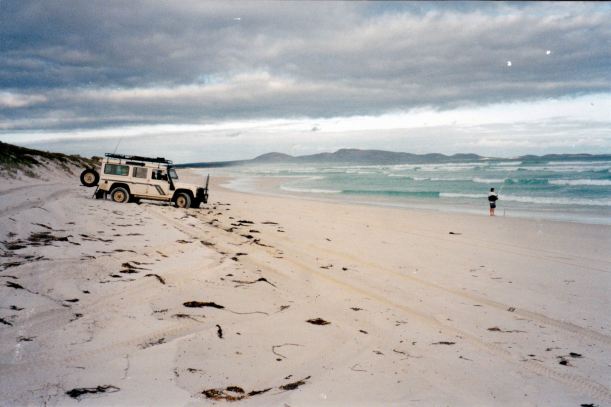 Fishing from the beach of Yokinup Bay

It was quite a chilly day, so I sat in Truck and knitted, while he fished.

Then he caught a big salmon. Much rejoicing! I cleaned it there on the beach. There was about three meals worth in it. Well done, John! 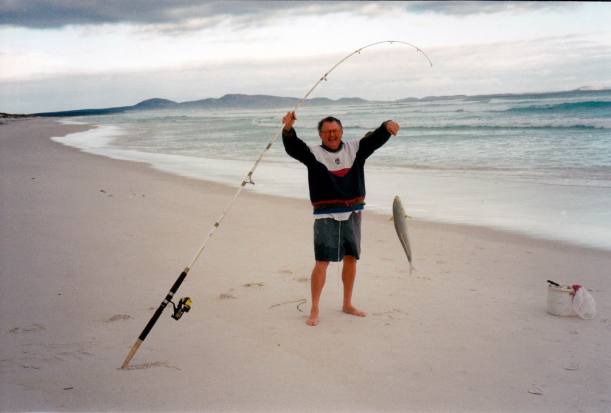 We kept a careful eye on the tides, so as to make sure there was some firm sand, still, when it was time to drive back.

Late afternoon on the beach

At camp, we met the Ranger. He gave us information about the track east to Israelite Bay, and those to other parts of the Park.

I dusted some of the salmon in seasoned flour and fried it for tea – it was a bit dry. I am no expert fish cook!

The other two lots of campers left today. There was only us and the camp hosts, and they were to leave tomorrow, too.

It was a beautiful evening, with a full moon. There was a big roll of cloud hovering over the bay, visible in the moonlight.