The temperature reached 47 today! At night, in the van, it did not go below 36!

A set of metal stairs the men made were installed to the kitchen. Remedying the faults listed on the kitchen punch list was in progress. The new aircons were being installed to the office and the electricals being done for those. A cement slab for ambulance parking was poured outside the first aid room. The sport court area was being measured up. A pump out pit was being dug – according to the work list given to me, but I had no idea what or where that was. Pod 3 was being cleaned and set up.

Inside the mess area, looking to the kitchen. Lights!

The sub contracting firm that had installed the water and sewerage systems, left.

The gensets ran out of fuel overnight and now kept tripping out.

The FMG head honcho from Hedland instructed us to keep filling the camp gensets. The overall Spotless camp manager would ultimately be responsible for that, but they did not know when! R was not happy about this. We were also instructed to keep doing the tip runs – poor John!

By the afternoon, we were at the point where all services to the Village were working – sort of. The power supply was on, but was unstable at full operating level. The water level in the tank was unknown – but there was some. The sewer system was working – but dependent on the gensets going. The kitchen was reliant on temporary gas bottles. 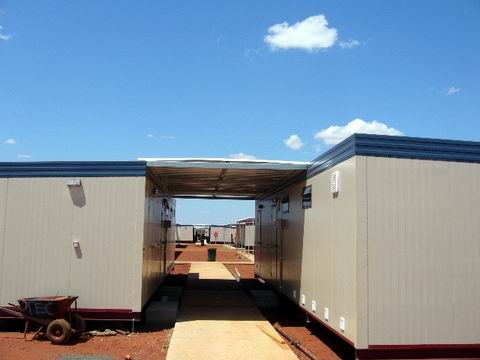 Our men had built roofs between each pair of laundries

Spotless was unpacking food and equipment into the kitchen. A refrigerated container of goods arrived for them – that power supply had better keep happening!

There was a minor panic in the morning. Yesterday one of our men had taken it upon himself to burn the stuff that had been in the rubbish pit – plus some extra. He did it late in the afternoon and was happy that it had burnt right down and would not be an overnight problem. But this morning, someone from Spotless – rather than make proper arrangements to dispose of their unpacking rubbish, dumped it in the pit and went away.  A little while later, due to some smouldering that must have been left in the bottom, the whole lot went up in a sizeable blaze, and spread into the nearby spinifex. Our men had to race to put it out and not very much was burned. But it then had to be the subject of an incident report for me to prepare, for HO. Bloody Spotless!

Auto electrician came out from Hedland and repaired the Canter vehicle.

The cooling guy came up from Newman, fixed the coolroom and put a new compressor in the freezer. He  couldn’t test it properly because the power went off! The coolroom in the wet mess was also reported as U/S. That would get fixed by the same guy – maybe on Sunday? Some of these older, pre-used units did not seem to have travelled too well.

R went into Hedland with the semi, took the bobcat in to be fixed, brought back more steel. Brickie was still in Hedland, on sick leave. Steel was having to be bought for things like making access stairs and handrails.

Stairs had to be welded up and installed for several buildings; here – the kitchen

John had two runs into Hedland – in for the morning plane, then again in the afternoon to collect flashings he’d had to get made for the office roof. He met up with R in town and they collected the missing aircons that had now arrived from the building firm, loaded them on the semi. Now we had some surplus air cons, but they would be able to be used somewhere.

I spent any time I could get away from the office – and the Spotless invaders – in the kitchen, finding and recording the serial numbers for all the appliances and fittings. Who knew so many appliances and things would be part of our camp construction? Some of them I didn’t even know what the appliances did – which made it a bit hard to record. “Big square steel kitchen thing” …… I would have to put these onto a proper list for the records and hand over books, and hope someone else could make sense of them!