A day of the usual routines and paperwork through the morning.

R filled me in on some background information that would help me make more sense of what was going on. One of the snippets I learned was that the company had its own road train for transporting portable buildings and this would be used for some that would be coming from Darwin and Alice Springs. But the newly manufactured donga buildings that were coming up from the makers in Perth, came via separate transport companies – it was their drivers I had been dealing with when collecting the necessary paperwork.

Apparently, the company had attempted to move one structure here from Alice Springs via the Tanami Track to Halls Creek. The Tanami was notoriously rough at the best of times and at this stage of the year even more so than usual. That structure was now a pile of matchwood beside the Tanami, much closer to Alice than to Halls Creek! Any further building movement from there went the long way round, via Katherine.

After lunch, I drove Truck into Hedland, to collect John from the bus.

We were now able to refuel from a big tank of diesel that had been installed at the Fly Camp  – necessary to fuel up the machinery being used. John had filled our Truck before he went to Broome, so I did not have to worry about fuel.

I made sure I had enough time before the bus got in, to go to some shops. I had to buy three electric clocks and a supply of batteries – R wanted them for the men’s crib room and our offices. He also had tasked me to buy a TV and DVD player – intended for the South Point Fly Camp, so the men there would be able to watch football. Perhaps some consolation for the poor quality of their camp.

As I walked around the shops, wearing my work gear, felt very much part of the FIFO scene! No one gave me a second glance – just one of the many. 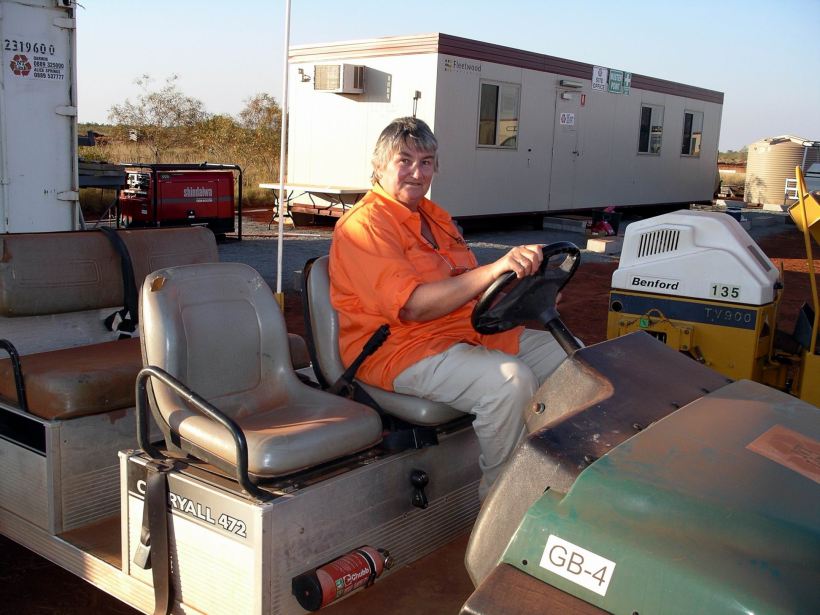 John was weary, but had enjoyed his jaunt. But he commented that the Roebuck had been a very rowdy place to stay!

I had arranged for some tea to be saved for us, but in the event, we were back just in time for that.