The guests departed through the morning.

Their comments in the guest book:

* A heavenly haven. Thank you for a great explore of your station.

* Thanks for a wonderful stay. Fantastic experience.

I did a little cleaning up of the camp. Stripped sheets from a couple of tents, did the washing, made them up fresh, for guests due in tomorrow. Closed up the other tents until I had time to tackle those.

A and W were to leave tomorrow, so I made a farewell tea at camp and we all ate together. Made Asian style fish, from a big queenfish that had been in the freezer, French fries, salads, with a trifle to follow.

Their little dog, despite my early fears, had survived and thrived, without being eaten by a python or a dingo. Though I wasn’t sure that she would ever return to her white colour again! She had changed a lot, from the clean and clipped pampered pooch. She seemed to have become an honorary dingo, at least around the house area, though A kept a close eye on her and she did not go off wandering with them. I think she had a ball! 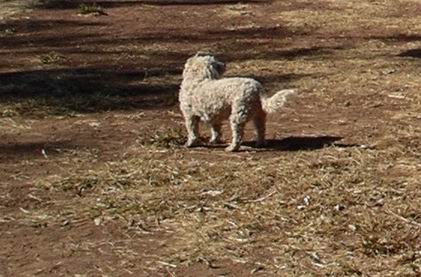 W would leave much of the machinery in much better order than when he came, though there was always more to do, and he would be missed about the place.

O would have his house all to himself again, which we hoped might make him seem happier than he had of late. I think when one was used to solitude for much of the time, the regular presence of even pleasant and easy going people became wearing.