We were able to sleep in just a little later this morning, because the two guests had said they wanted a later start to the day.

We saw them breakfasted and sent them on their way, with the slightly ceremonious farewell at the airstrip, that had become our norm.

* A very special place – we are so privileged to have shared it with you all. The camp is fabulous, but the Pungalina Billy Cart was favourite, crocks, dingoes, bowerbirds, rare birds, quinine trees, and FINE WINE!!! A special thanks to E, Wendy and John, M, A, W and O.

* Thanks for the great opportunities.

* Great people and a great place made a great time.

*Too good to be true but it is.

The campers who had been in for two nights left today.

John refuelled the Truck – it had done 442kms since last time.

I cleared out the kitchen fridge and the big drinks fridge, and the two portable fridges we had been using, and took all the perishable contents up to store in the house fridge and freezer. Then, the generator could be turned off and we would have daytime peace again.

And we fell in a heap – able to relax after a very intensive period. I decided I would worry about getting the safari camp cleaned up after M had left – we would focus on her right now. Her help over this time had been invaluable – a really hard worker. She had gotten to see quite a bit, as well, by going out with the large group for some of the time.

While the group was here, the dingoes had spent much of the time tied up at the house, so that they would not visit the camp. Occasionally, O would bring one of the females down with him, and keep a close eye on same, because the guests really liked interacting with dingoes! I used to send the left over food scraps back to the house with him, last thing at night, for the dings. I was missing having them about!

Now, they appreciated having their freedom back again and soon visited us, checking out that all was well with us. I loved the way that Scunge could stand at the doorway of the kitchen tent, with her toenails right at the tarp floor edge, and lean so far into the tent to check out what I was doing, without overbalancing. 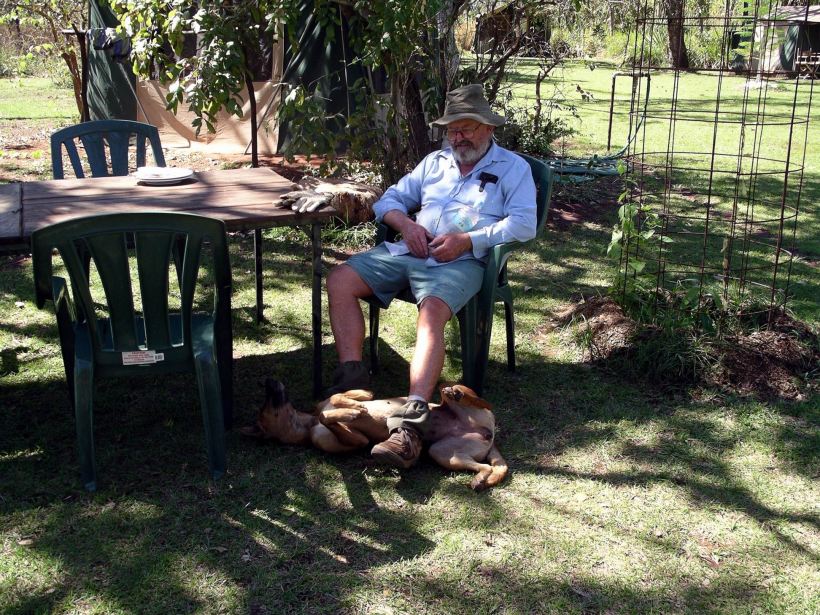 The cavers’ group had left a sizeable “tip” with O. I think their camp site had been provided for free – in return for the knowledge they contributed about the cave systems. O tried to share that money with us – we refused, saying we were only doing our jobs. Then he tried to get M to take it all, in recognition of her hard work, but she refused, saying the experience of being here and seeing the place, and being fed, was all the reward she wanted.

We were able to have a relaxed happy hour at Cane Toad Clearing, talk over all the events of the past few days, and enjoy the sunset. 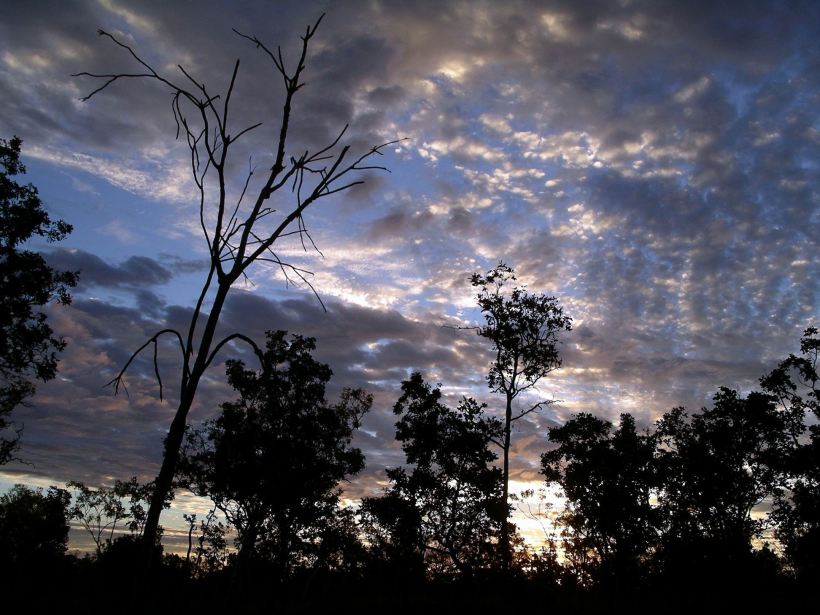