Today followed much the same routine as yesterday.

The company tour stays two nights, so their tents did not need doing until tomorrow – and it wouldn’t be by me!  I only had a few to do today.

It was mail plane day. I was annoyed to find that my much anticipated newspaper was not in the mail bag. In my lunch break, phoned the newsagent in Mt Isa about it. The girl who answered the phone told me the non-arrival was because “We always go to the Post Office on Mondays and the Post office was shut on Monday”! Clearly, this was a routine not to be broken for a little factor like a long weekend. Mount Isa mentality!

The boss’ washing machine was moved from the loading dock down to the laundry – in anticipation of the coming increase in tent guests and hence washing. The extra machine would definitely be needed. It also meant that the boss’ washing would need to be done by whoever was on tent duty. And here was I thinking my days of washing nappies were long past! 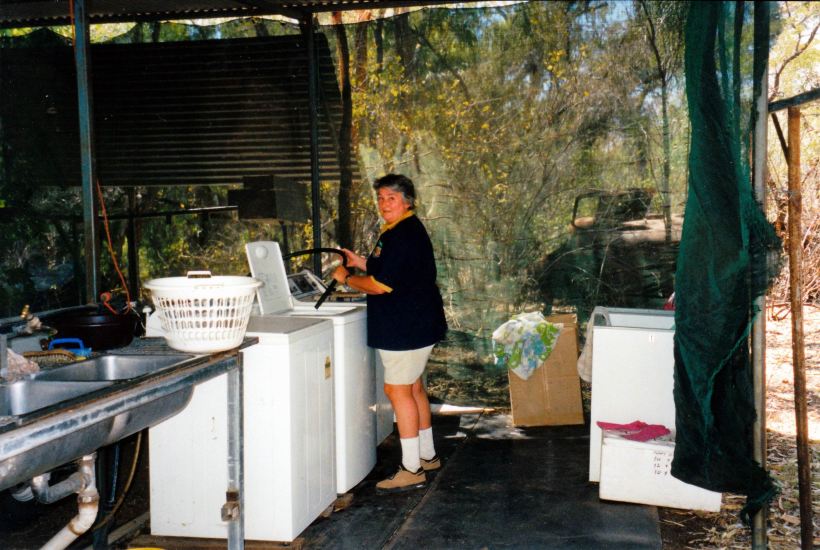 I asked, and was told, that the bigger, stronger,  commercial washing machines would not work here, due to the low water pressure that was delivered via the pump from the creek. There were also the issues of the calcium build up in machine innards, from the high calcium content of the water, and the little freshwater mussels that come in the water and then proceed to grow and colonize where they shouldn’t. Any domestic washing machine that lasted the distance here, for any time, was truly amazing.

The supply truck came in during the afternoon. Wednesday was happening day around here!