We slept in until after 8am. It was so good not to be getting up early and driving!

Breakfasted at the van – our usual grapefruit. The boss would order some of these in for me, each week, on the supply truck, so I wouldn’t be going without. Another concession that I’d negotiated before we came was to be supplied with bottled water for daytime drinking. I could cope with the local calcium-rich water, filtered in the jug in the van, for my tea and coffee, but not for straight drinking.

Today was one of much pottering about. We finalized the “home” set up. I took my eggs, remaining vegies and salad things, up to the kitchen and donated them to the cause. I did not intend to be cooking for us for some time now.

In the afternoon, we walked around the campground, getting a feel for it again.

Saw some interesting “used” cicada shells on some of the local snappy gum trees, clearly showing the hole in the back of the shell, where the new and larger insect had emerged.

We wandered along the Lawn Hill Creek bank, admiring the serenity of the Grove. As camper numbers built up, this would lessen!

Finished inspecting the new building – the shop and reception part at the front. Seemed functional enough. 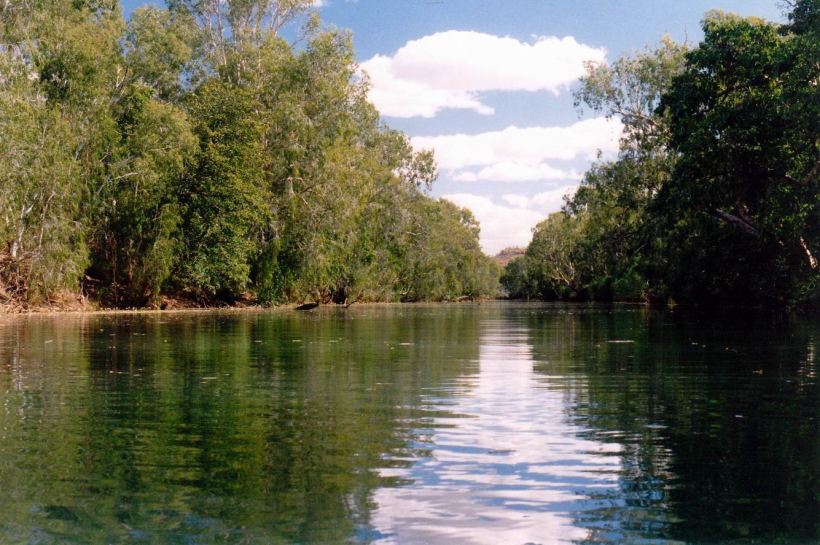 John and I found out our rostered duties for the week. I was to do tents/amenities on Monday and Tuesday. This was basically, housekeeping – changing the bedding and towels in any vacated tents and dongas, cleaning them, and cleaning the showers and toilets associated with that accommodation. It included washing the changed linen; there was no dedicated laundry lady this year. Wednesday and Thursday I would be on shop/reception duty, and Friday was day off. That seemed a sound introduction to my main duties here, this season.

John was rostered on to doing the watering and cleaning up the grounds on Monday. He would go to the National Park for a few hours to learn the canoe hire work, ahead of being allocated to that on Tuesday and Wednesday. Water/yard duties again on Thursday, and off on Friday.

I thought it would be good to have the variety through the working weeks.

We filled out forms for superannuation – we would get the compulsory contribution this year. Last year, that did not happen, because we were onkly going to be working for a couple of weeks, and it was never caught up on.

We wandered down to the grove and sat chatting with V and F. They were having two days off, having been working solidly since they got here.

John was able to hook his laptop into the office computer and download share stuff, emails and check our banking. Amazingly, we were not in the red, despite the Truck repair expenses, and the purchase of much fuel to get here. John would be allowed to do such a download once a week, so we will not be quite so isolated from the world! This would be our only internet access whilst here.

The Coaster bus was broken down – oil in the water, so maybe a gasket problem? It was not a good time for this to happen, as there would soon be visitors wanting to do the Riversleigh tour. Getting it fixed was a dilemma – it could not be driven to Mt Isa and trucking it there would be a costly option.

The liquor licence had not come through yet. Again, the timing was not great for the start of the tourist season. They could only hope it did not take much longer.

Tea tonight was even later – at 7.30pm. It was mostly left over chicken and salads, with potatoes and a spinach quiche to eke it out. Dessert was leftover baked apples from last night.

Once the dinner, bed and breakfast accommodation had guests, dinner would have to be at a more regular hour, I thought, even though it was pleasant, eating when the night was cooler.