A fine morning led to a hot day. It got to 37 degrees inside the van!

John wanted a loaf of bread made in the machine. I did not want to do this, because the van batteries ran a bit low yesterday – the fridge is running a lot – and I thought they should be allowed to get to full first. But John was determined.

The bread maker finished its operations about 12.30pm. It laboured a lot during the kneading stage – not enough power. The result was a funny shaped, very heavy loaf.

I had a salad for lunch. John had the new bread for a sandwich. He was not happy because I was still using up the grain bread mix – it might break his teeth!  He got me to throw out the 4kgs or so that I had left.

The batteries did not get to full again today, after that power drain.

After lunch, we went up to the shop/office and paid to hire a canoe. Canoes to paddle on Lawn Hill Creek, here at Adels, were on offer, and John wanted some practice before we went paddling at the National Park. He had not really done much canoeing, and none in recent times.

We were given paddles – the canoes were already at the launching place on the creek. Walked down to there. Had to get into the canoe, off the bank, but managed that alright.

The “wobbles” of a two-person canoe worried John at first, but he soon got used to that. The fairly wide, open canoes were really straightforward to manage. I had him sit at the front, so I could instruct him and control the “steering”.

The broad waterhole of Lawn Hill Creek, at Adels Grove

We had a very pleasant paddle upstream on the large and placid reach of the creek, for quite a distance, until we reached some shallow rapids. The other end of this long reach is at Adels Grove, where there were some small falls and more rapids.

We saw a small freshie croc, who remained floating about in the water, despite us passing fairly close to it. 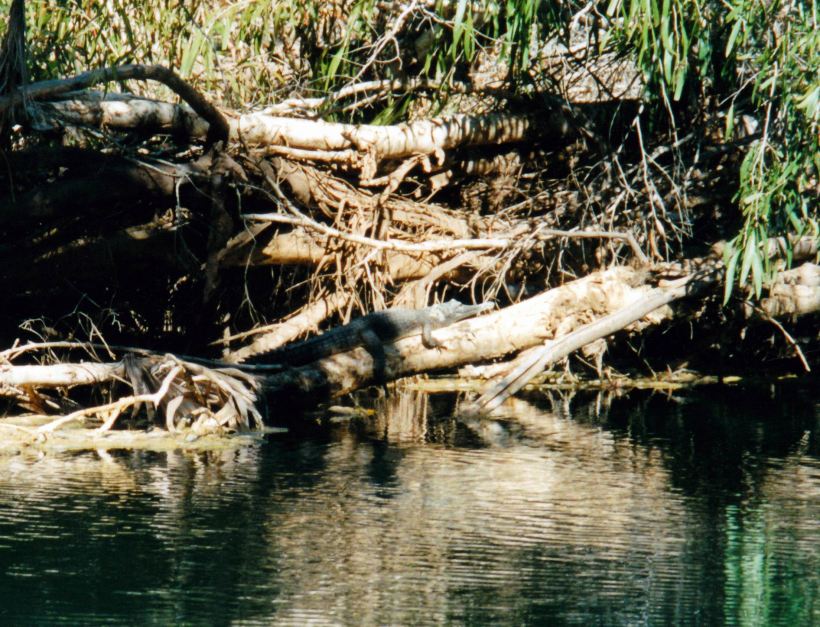 John found the hard canoe seat and the position he was required to sit in, quite uncomfortable for his hips.

We got out of the canoe with no mishaps of the falling in variety. Returned the paddles to the shop, which was a good chance to inspect their used book exchange, where I picked up three novels in return for a donation into the Flying Doctor collection tin.

Then we walked down to the swimming area that was supposed to be more shallow than the main waterhole – on a smaller creek channel that separates off from the main creek,  around a little island. I went swimming. John watched – he was unsure about swimming in water that might be deep, but I found it actually had some nice shallows too. There was no real current, either. It was really enjoyable. 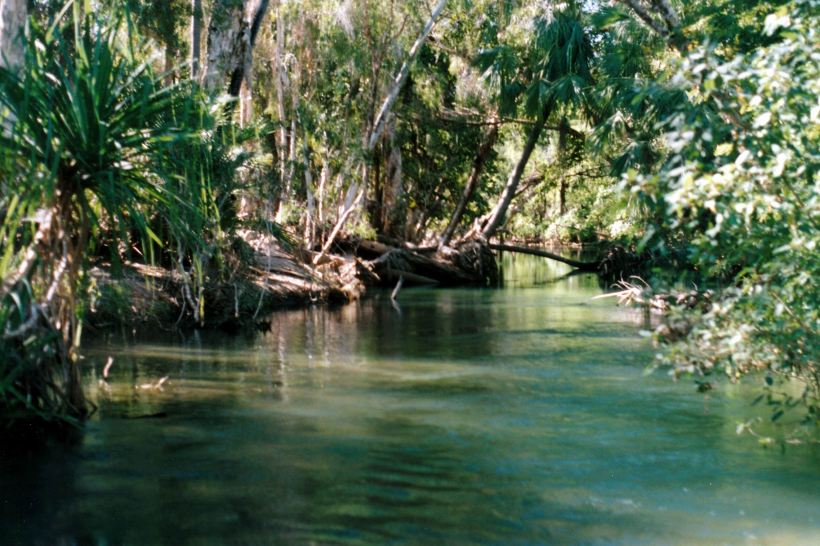 The shallower swimming section of the creek

I made fish cakes for tea.

All this exercise is definitely leading to early nights.