We were not up and going as early as I’d hoped to be.

The National Park Guide indicated that several of the walks were best done in the earlier morning, or mid afternoon – not in the heat of the middle of the day.

The 10km of road to the National Park was very corrugated and rough. Having to go back and forth on that was going to be one drawback of staying where we were. But the route into the Park is an interesting one, winding between hills.

I’d thought we could do one of the shorter walks, like to the Cascades, to walk ourselves in, and because it was 11.30 when we set out from Adels Grove. I’d packed the makings for a picnic lunch, with the intention of eating it at the National Park camp area.

But John decided when we got there, that we would do the longest walk. out over the sandstone ridges, to the Upper Gorge, and back via Indarri Falls. That was a circuit of a bit over 7kms! So I packed the lightest lunch makings into the day pack and left the block of cheese and the vegemite jar at Truck.

The track climbed very gradually, between sandstone ridges. The going underfoot was alright, but it was hot. Then it was a fairly easy climb up to the ridge tops.

The Middle Gorge in the distance, from the ridge tops

From the Lookout there were great views over the Upper Gorge. 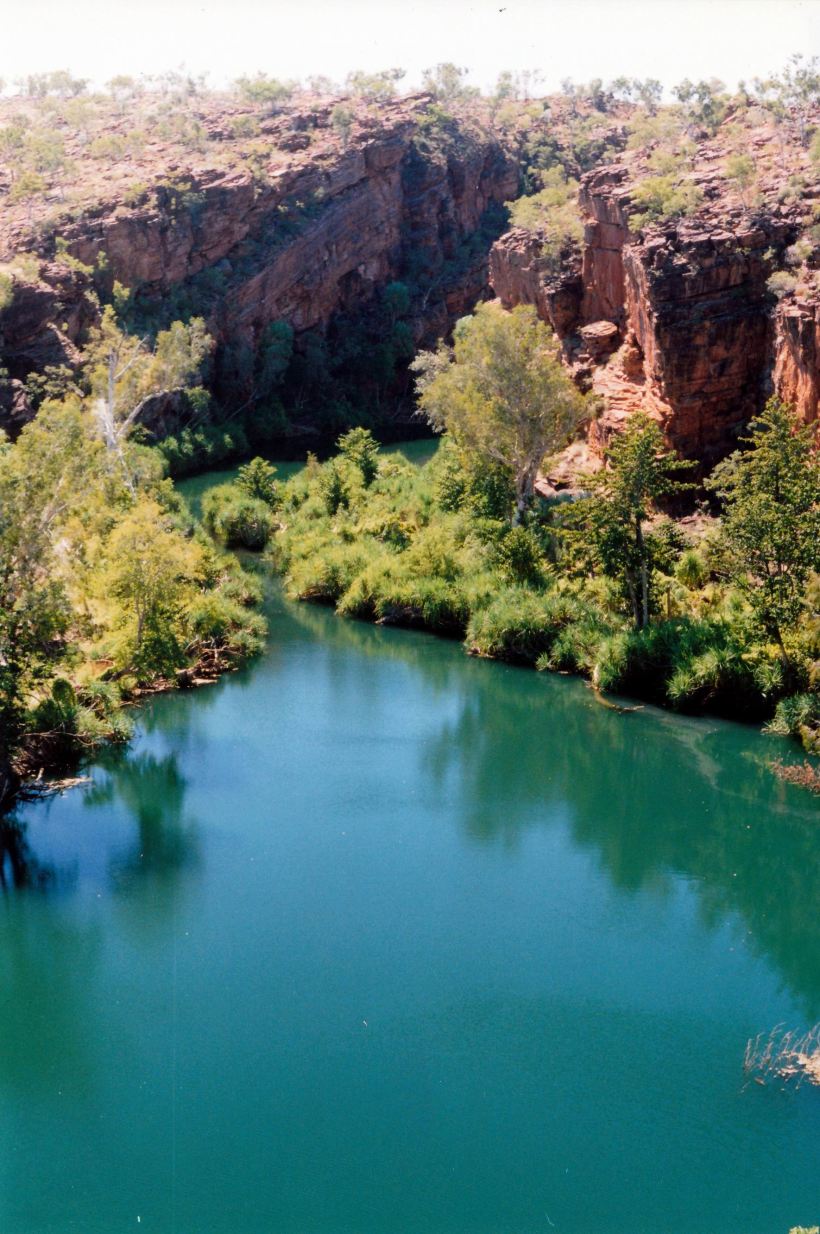 The Upper Gorge, showing the way in from the Middle Gorge

Lawn Hill Creek is fed from springs that originate from the nearby eastern edge of the limestone Barkly Tablelands. A number of the other streams of this corner of Qld originate in the same way and feed into the Gulf of Carpentaria. This origin means they flow all year round – a permanent water source for the local pastoral properties and the like.

In the area of the National Park, Lawn Hill Creek flows through a deep gorge, cut into red sandstone. The Gorge is split into three parts, by shallow rapids -Cascades – between the Lower and Middle Gorge, and by the low Indarri Falls between the Middle and Upper Gorge.

Lawn Hill Creek narrows at the end of the Upper Gorge

The contrast between the red gorge walls and the deep green colour of the creek water was striking. Because of the permanent water, there is a lush riverine ecosystem along the creek banks – a stark contrast to the dry scrub and grassland country surrounding it. 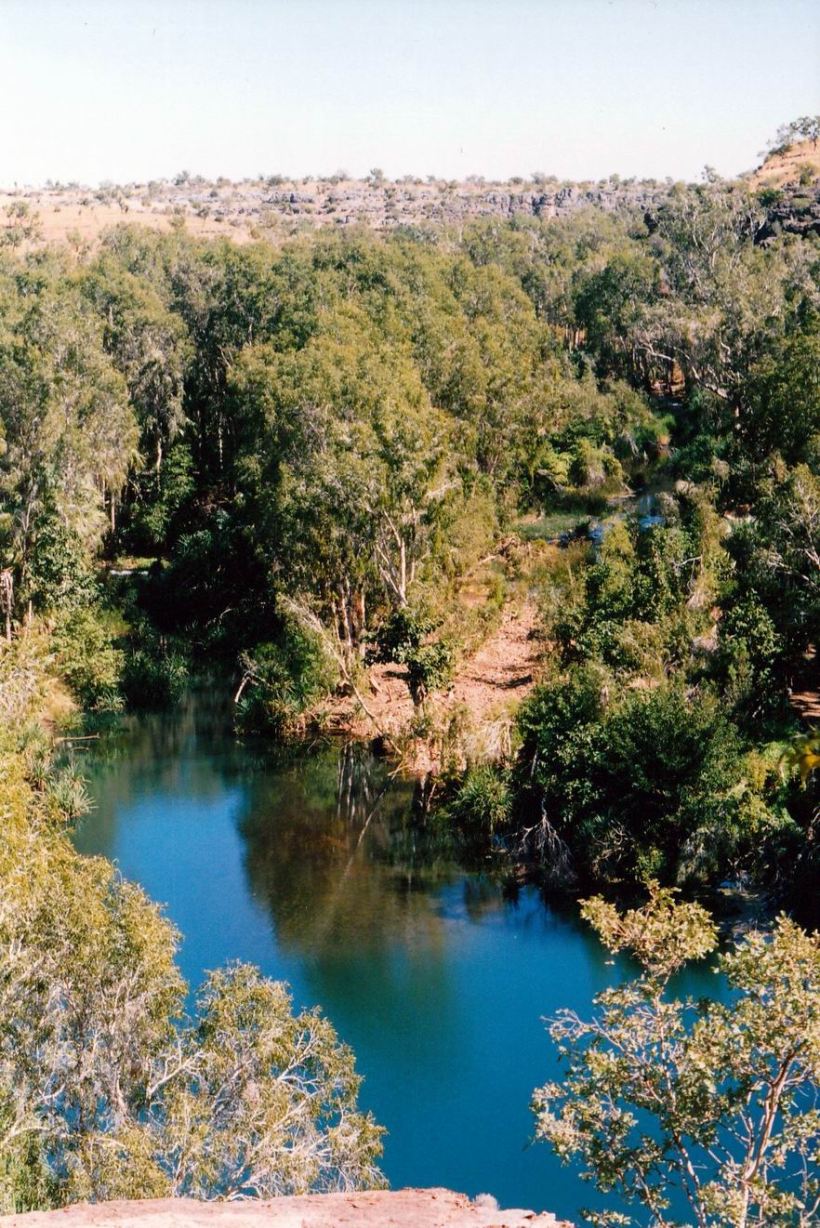 The top end of the Upper Gorge, showing scarring from wet season floods

We had lunch sitting on a bench seat that some thoughtful National Parks person had installed up there, overlooking the gorge. I had some salami and tomato to go on our Cruskits – the toppings were a bit sparse, though, and I didn’t eat much.

Upper Gorge from the Lookout

Saw a freshwater crocodile float around in the water, below us. According to the Adels literature, these are the only kind of crocs in the creek and Gorge, and they are very timid, preferring to avoid people rather than eat them!

Just as we were about to leave the Lookout, saw two canoes paddle into view, from around the corner in the distance. We said we must do that, one day, while we are here!

The track went down to the edge of the Gorge, then followed it for a way, through pandanus, and often with the water right at our feet.

The track beside the creek, in the Upper Gorge

Then we reached the Indarri Falls – low cascades over tufa (hardened calcium deposits) walls. This wall across the creek was quite wide, with about four different water cascades going over it. Again, incredibly photogenic.

We sat by the falls, just looking about, for a while. Could see big and small fish in the water, which looked quite deep. It was definitely not a place for John to swim! It actually looked as if it would be hard to get out of, with deep water right to the edge, and slippery banks. 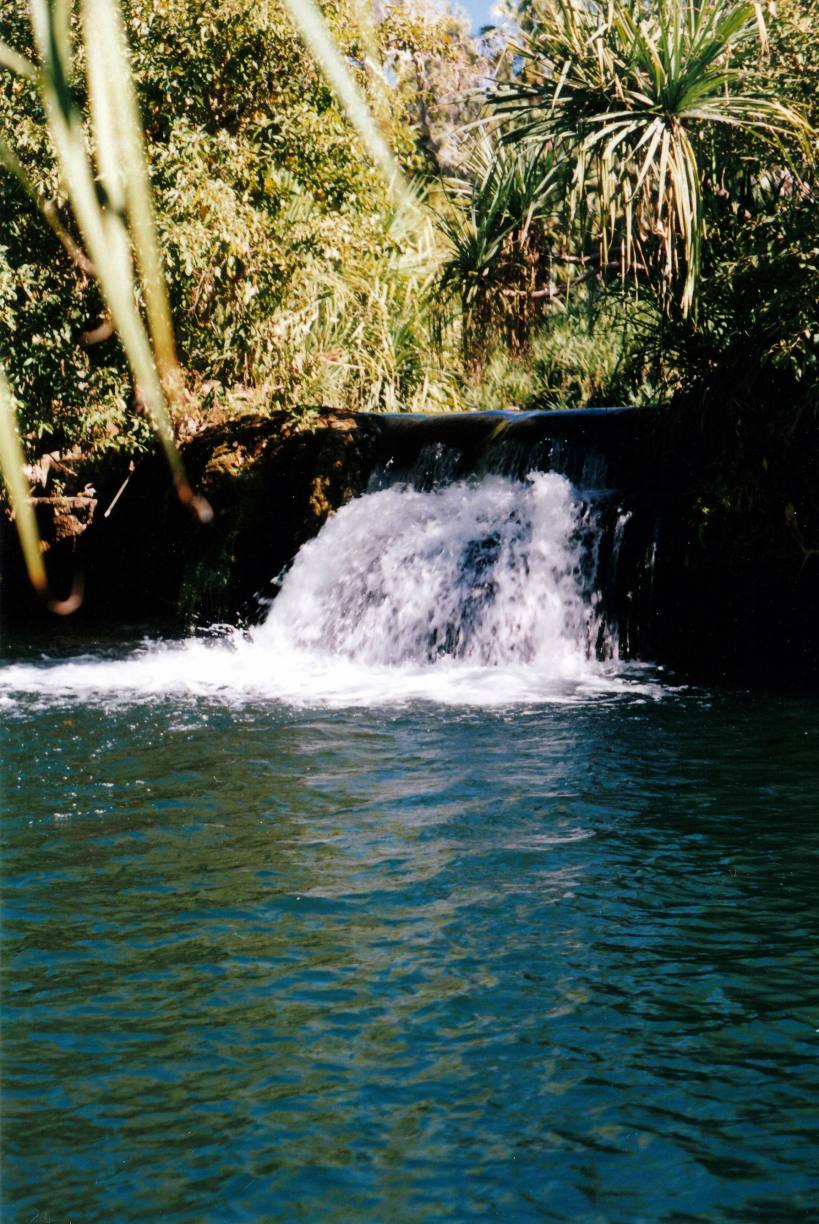 There seemed to be a track where people could take canoes around the falls. I didn’t think getting into and out of canoes would be all that easy, here, either.

After our sojourn at Indarri, the track became unexpectedly hard going – up and down rocky ridges, and it was very hot. A lookout gave us great views over Indarri Falls and the Middle Gorge.

Indarri Falls and the Upper Gorge

Indarri Falls. The rough canoe exit point was at the far left

After about a km of this and a couple of tough climbs, we came to a high point that overlooked the campground – it was a relief to have the end in sight.

The Middle Gorge from Indarri Lookout

The track was a very steep “staircase” down. I would not have liked to be going up it!

I could see why people get the heat exhaustion that the lady at Adels had warned us about!

It was 4.30pm when we completed the walk. Had a bit of a wander and look around the camp area.

I was been disappointed that, at the National Park, there was not an information display of any note, and no sales outlet for things like postcards. There was just a shelter with brochures on offer – the same brochure that we’d been given at Adels – and a few notices pinned up. I guess I’d been expecting something like there was at Carnarvon Gorge.

The camp area there was quite dry and dusty with mostly small sites. It was nowhere near as nice as Adels. Notices said that campfires were banned. The showers were cold water only. But the creek was wide and deep there and clearly attractive for swimming.

There really did not seem to be that many people in the campground, despite the lateness of the afternoon. So much for the notices we’d seen at places like Gregory Downs, saying the campground was booked out.

We drove back to camp with the Truck air-con going. Nice.

There were more people in the Adels Grove campground when we got back.

After much appreciated showers, John got the campfire going. We baked potatoes in foil in the embers, then John BBQ’d the lamb fillet that I’d marinated this morning in a Korma mix. I made a salad too. It was a very enjoyable dinner.

The night featured a superb starry sky, with a sliver of a new moon. But it got cold once the sun had gone down.