It was a fine day after a chilly night.

We left town, after checking for the Saturday papers at the shop. They had not yet arrived. Oh well, can’t win them all.

It was only about 100kms to Eromanga, the first 35kms on the same road as we’d already driven to go out to Pinkilla the other day. The road was easy enough driving – a reasonably wide single strip of tar and pretty flat country.

On our first pass through the hamlet, I could not see the Eromanga Caravan Park that the literature had indicated was in town. I asked at the hotel which was at the far end of the town and was told that it was behind the cafe/roadhouse. That, we had passed, so we returned there.

Booked in – $10 a night for a powered spot. I would not really call it a site. The fee indicated the overall level of facilities. It was, basically, just parking by a power outlet pole, in the middle of a gravelled area. On the other side of the pole from us was what appeared to be a permanently parked van. 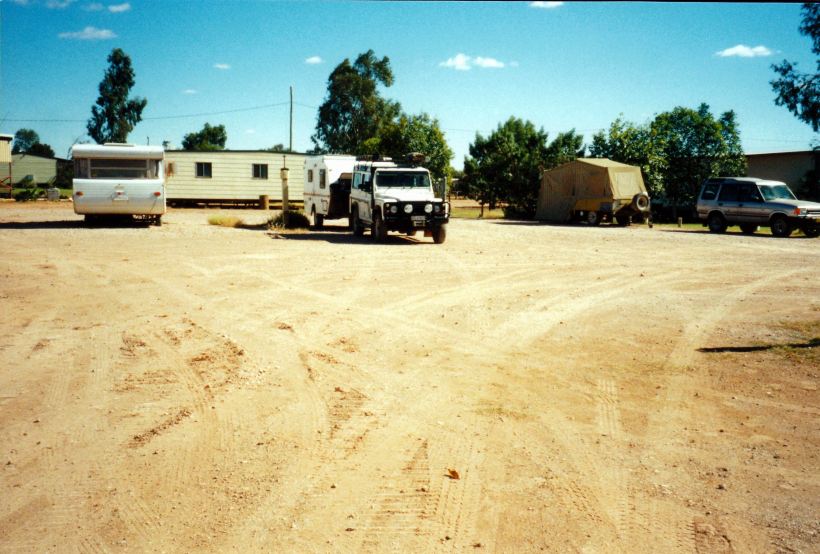 We were told there would be a BBQ tea provided tonight.

There was another occupant of the small caravan facility – a camper trailer, set up off power. Later, a couple of older ladies returned to it. They had been taken on a tour of the area – free – I gathered.

Very hospitable people here, though Eromanga is not exactly on the beaten tourist track.

Later, another offroad van – not our brand – arrived, and set up on power too.

We had an early lunch, then went for a walk and saw pretty much all of the town – a few houses, the hotel, a school, our roadhouse/cafe/motel, a police station. There was no general store.

There was a small oil cracking refinery across from the cafe and camp area, and it also sold fuel, but it was not cheap – a BP outlet. One would think that the fuel would be cheaper, in these circumstances, with no need to transport it distances.

The refinery product was taken to the pipeline at the Jackson oil field, near Noccundra to the south, by a specially licensed B-double-double truck – i.e. four trailers. I felt glad we were not taking the same route – imagine the sway on the hind-most trailer! The truck left every morning about 8am and returned about 8pm every night. The road had been especially sealed to take this traffic.

We walked out to the cattle grid at the entrance to town, to photograph the sign that says Eromanga is the “furthest town from the sea” in Australia. I found that somewhat hard to credit. 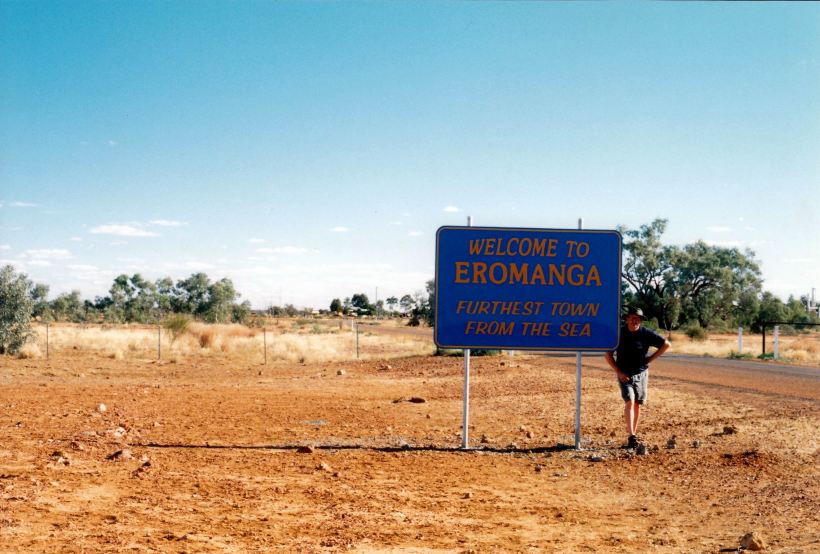 On our walk, spent some time at a display of old machinery that was set up on a vacant block by the road. John became totally engrossed in this, and even I found it interesting. There was an early oil drilling rig, set up to be pulled and positioned by horse, it appeared, and a collection of different sized flywheels and the like. 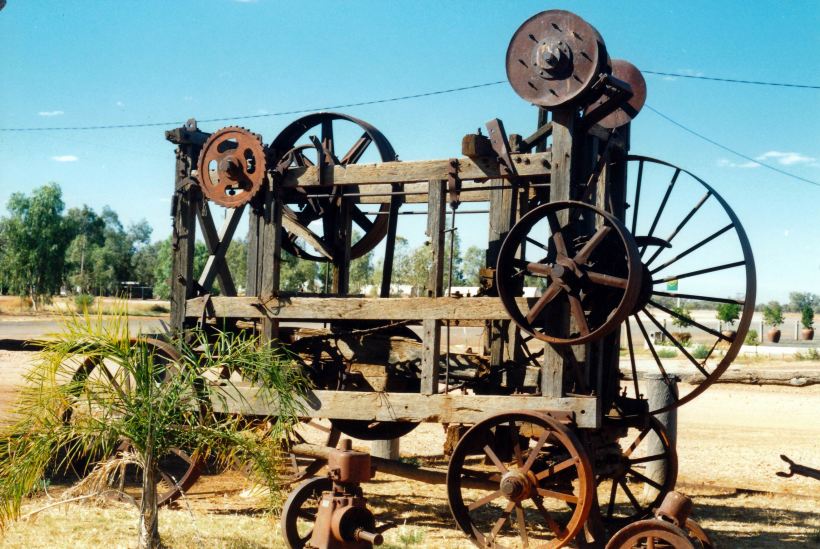 There was a machine whose appearance from a distance had us mystified until we could read the sign that said it was a machine for turning flat sheets of tin into corrugated iron. 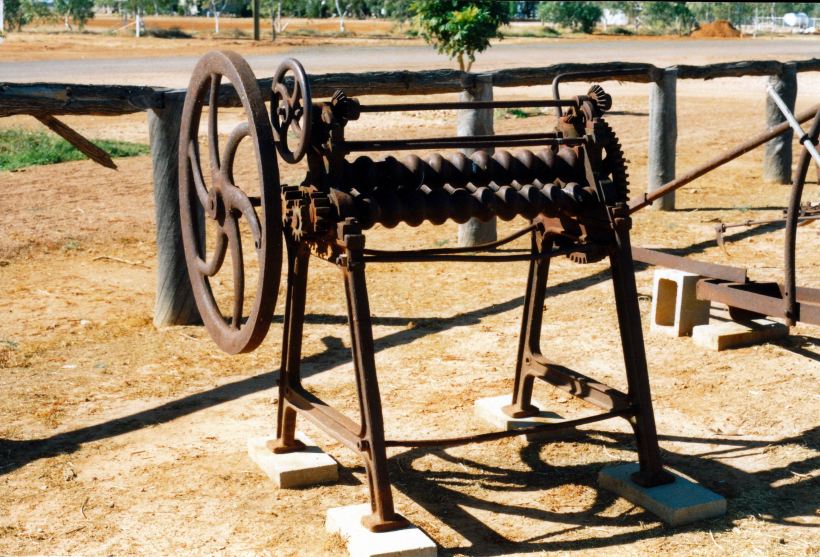 John was most taken by a machine that tumbled and sorted opal. Eromanga is still definitely within the Queensland opal region. I could see John inspecting it and considering whether he could build something similar. Might be a bit hard to carry on the roof rack, though! 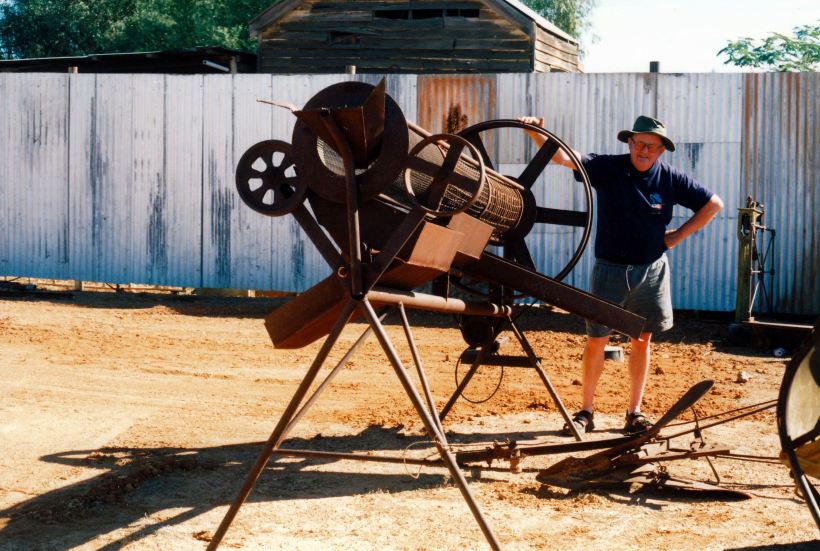 The lady who had booked us in warned us that the local bore water supply was very smelly and oily, and that it had so much gas in it that it could sometimes be lit! So we decided to pass on showers.

We did decide to go to the BBQ tea as a way of meeting some of the locals and maybe finding out more about the area. There were quite a few people there – mostly family, it seemed, and some who worked for the earth-moving branch of the family’s businesses. They had all had a big night, last night, at the post-races party. What a pity that we hadn’t been a day early – we could have gone to a true country horse race meeting.

There was lots of food provided. Salads, sausages, meat patties, chops, steak, hot potatoes.  The roadhouse owners also own Kyabra Station, an historic former Durack property, to the north, but have to live in town because of their other businesses, especially the earth moving. They were developing the motel and cabin side of the place here. The motel looked quite nice.

The lady owner told me that she found it hard to get – and keep – staff, out here. She also told me that she had an opal they found out on their property, worth nearly $100,000. She might remember to show it to us tomorrow. I’d certainly love to see it!

They were really nice, friendly, generous people. She would not take any payment for the meal! We told her we would put a donation in the Flying Doctor donation tin at the hotel.

We spent some time talking with the people from the other off road van. He was some sort of professional sportsman – but his knees were shot, now. He had just had solar power put onto his van and was having problems, too. He did not seem to fully understand it all, either. His 240v charger did not seem to be working. He was not at all happy with the attitude of the company that made his van, towards their customers. We found them pleasant people to talk to.

We’d had a great day in a little township where we had not expected much. 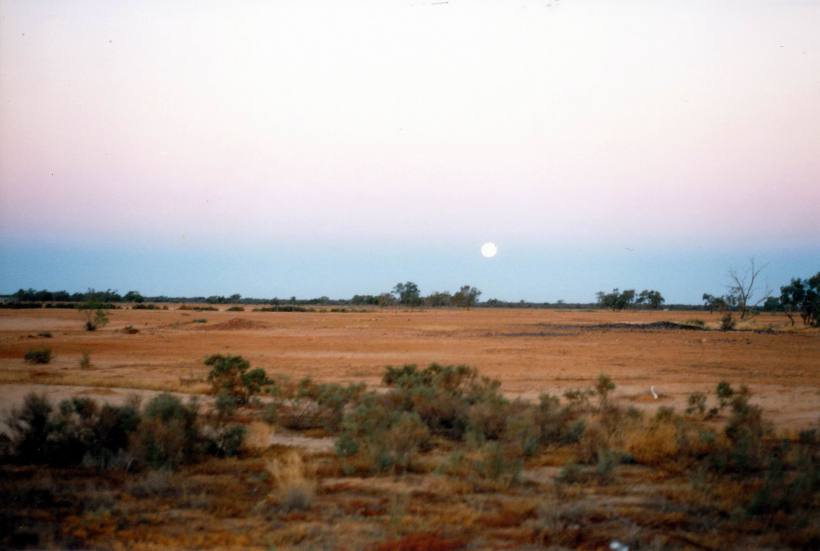 To top it off, there was a full moon rising and the dusk sky had that blue and pink layered effect that seems quite common in the arid outback.