After another chilly night, it was cold again in the morning.

I got up about 7.30am. The sky was much clearer than yesterday – almost totally blue.

Mike does not mine on Sundays – it was rest day.

After our usual leisurely breakfast, I made focaccia bread, with a topping of onion, dried sage and cheese on top. With this local wood, it was hard to keep the coals sufficiently hot and the bread took a while to cook. It turned out to have more of a cake texture, than bread, but was nice eating. We had half for lunch and left half for tomorrow.

Bl left about lunchtime. He was going to prospect and camp out beyond Sheep Station Creek.

After lunch, we went walking, out the back of Mike’s place, past the Telstra tower. Went back to an old humpy hut that John had found when walking yesterday. It looked like it had only really ever been a sort of lean-to, put together with scavenged materials.

Inside, there had been an attempt to line the roof, by putting netting wire between the rafters, which held up pieces of corrugated cardboard.

There was a lovely bird nest on one of the old supports – a mud-builder’s nest. 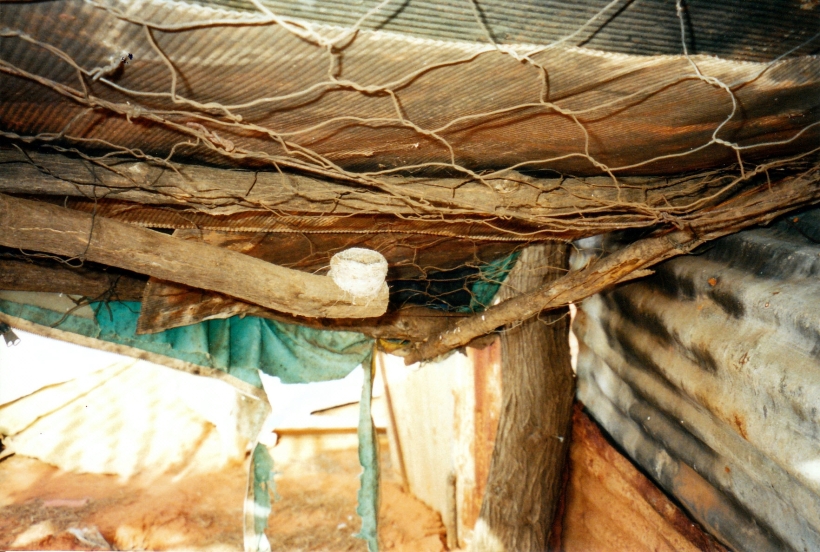 We speculated about the ruin’s history; given some of the stuff still there, it looked like the occupant had intended to come back, but hadn’t – plates, old foodstuffs. There was no obvious mine or claim nearby, and it was in some mulga scrub on flats that had obviously flooded at times. It just didn’t seem an obvious place for a miner’s camp. Later, Mike told us that it was a “blackfeller’s camp.”

We walked on beyond that and came into another mined area – on the flats, as opposed to the area where Mike is, amongst low rises. Although we novices would have thought the flats unlikely, there were lots of old shafts here and some open cuts.

The stony flats beyond the mining claims

In one of these, it was evident where the cut had intersected old shafts and tunnels, and that was interesting. We could see what was presumably the first opal level, where darker surface material intersected with the white sandstone or clays. It looked like there might have been a second level of opal here – towards the base of the white material. Some of the old shafts were at that level, as well as the base of the open cut. It was a big cut, but did not look like there had been any activity for a year or two. 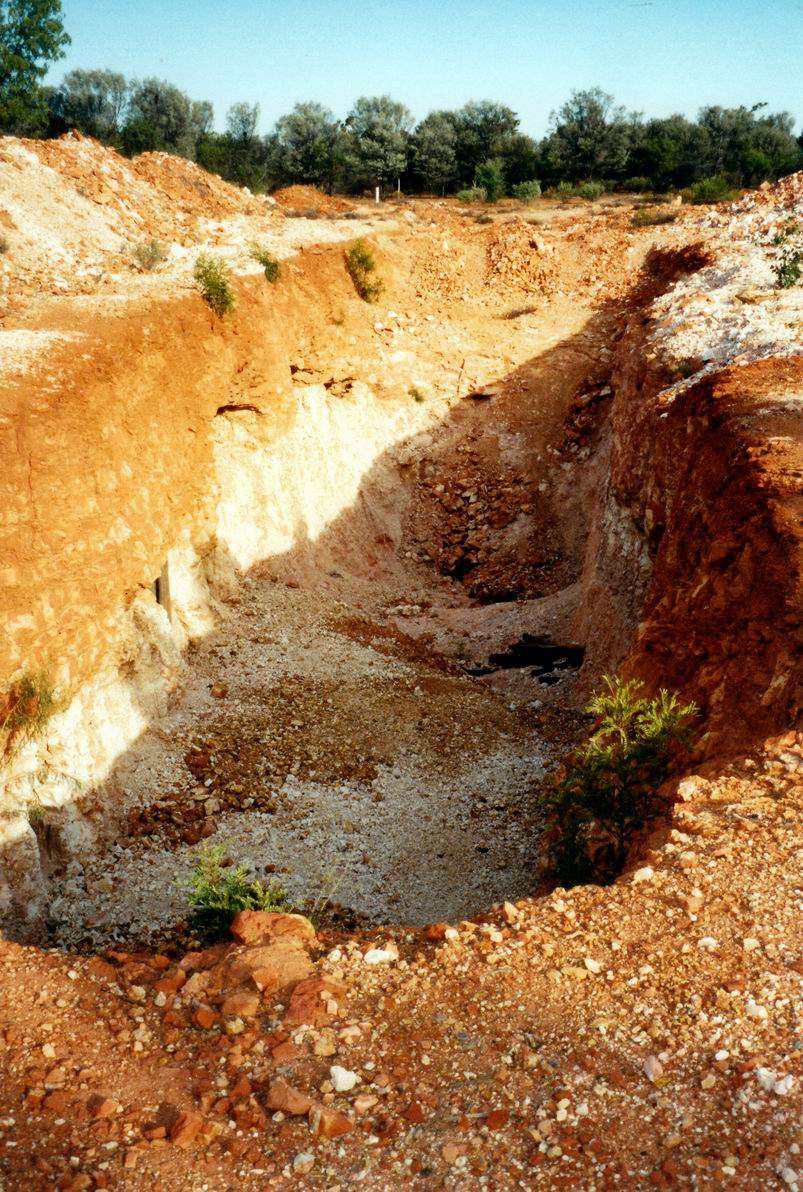 We saw a family group of Splendid Wrens. The male was only showing a blue wash on his wings and tail, not the full brilliant blue of the mating season.

It was an enjoyable walk. The wind came up during the afternoon, and streaky clouds developed, too.

The old and the new

When we got back, Mike was about to have a shower. This seemed to be a weekly event – part of the Sunday routine. He’d had a fire going in the drum next to his bath house, to heat the water. I gave him some of the minestrone soup. He’d been out on his motor bike, visiting and just generally checking over the area, for most of the afternoon. I had gained the impression, by now, that he liked to know exactly who was on the fields, and where they were.

Back at the van, the butcher bird that visited regularly, was being very bold, even walking around on the table, right in front of me.

Just on dark, a red Jeep that we’d seen a couple of times in the distance, drove in and came over to us. He thought the Defender was B’s. He introduced himself as F – another of the regular inhabitants of the fields. We explained that we were tourists, not miners, so he then went off to visit Mike.

Out tea was soup, then potato and corn patties. The latter was John’s idea – for some reason he was feeling rather queasy and didn’t want anything more substantial.

There was a half-moon tonight.