Today was another walking day.

Our plan was to walk the track along the creek, through the gorge, as far as Wards Canyon – about 4.6kms – see that, then turn around and work our way back, visiting the other special features as we came back.

The walk back up the creek was as pleasant as it had been two days ago. The gorge is just so beautiful.

The creek in Carnarvon Gorge

Wards Canyon was up a steep little side track alongside a small creek for about 250 metres, past a little water rapid. It was a deep and narrow gorge – almost just a cleft in the rock. It was notable for the King Ferns that grow there – the world’s largest ferns. It was quite dim and cool in there. 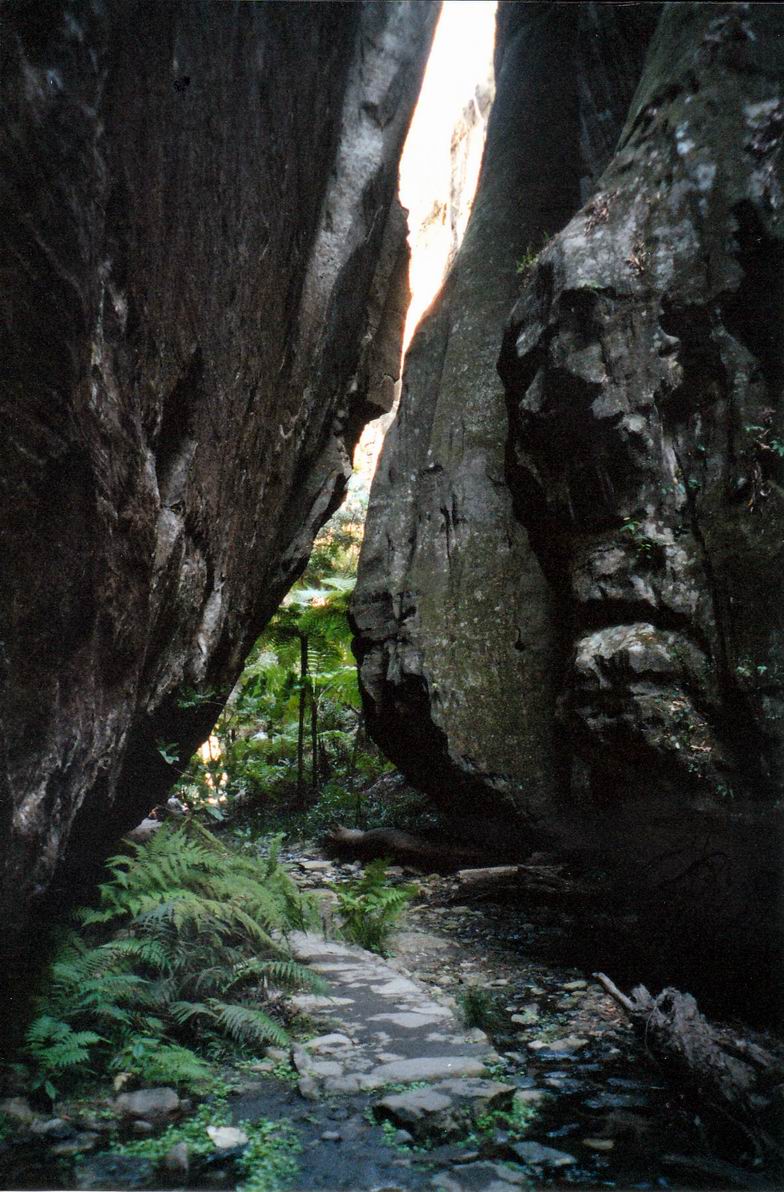 From that point, we were returning the way we came.

Not far back along the main track from Wards Canyon was the side track off to the Ampitheatre. This was a narrow, scrambly track, some 600 metres in. At the end of this there was the steep side of the gorge wall, with a ladder to climb to go further. At the top of the ladder was a really narrow cleft that was the way to get through to the Ampitheatre. 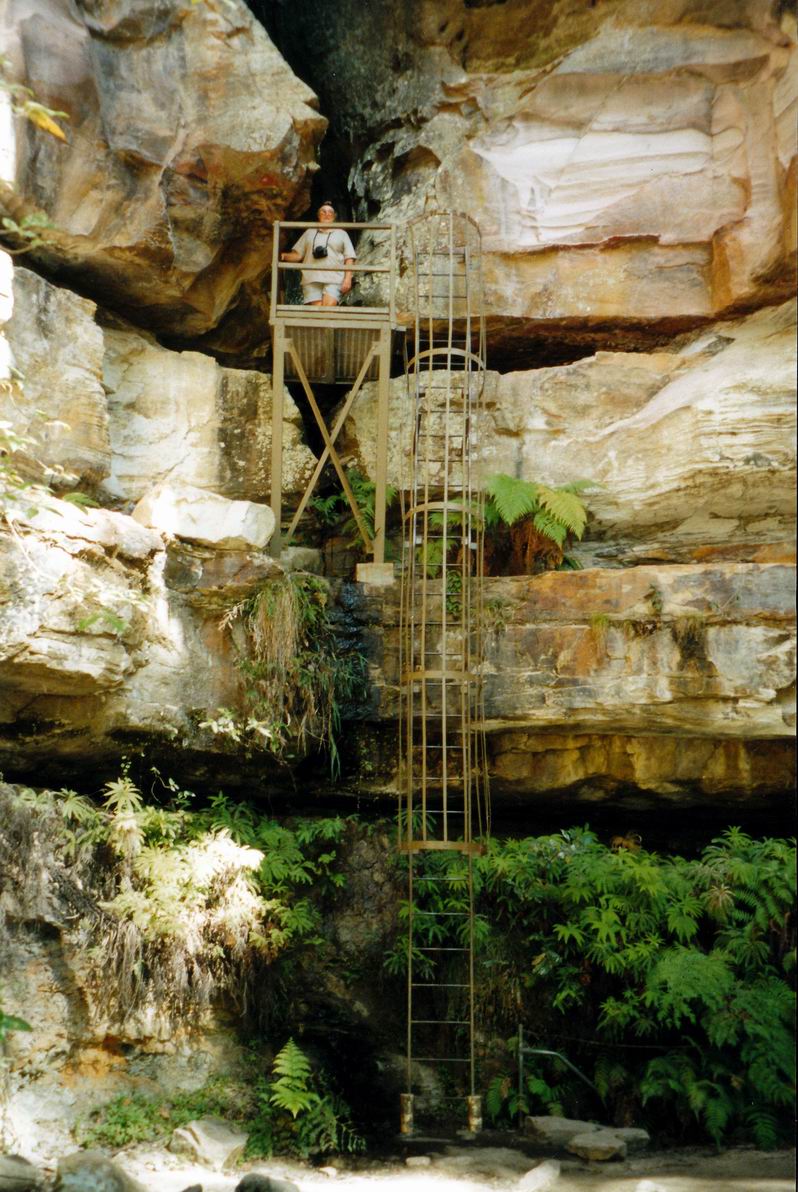 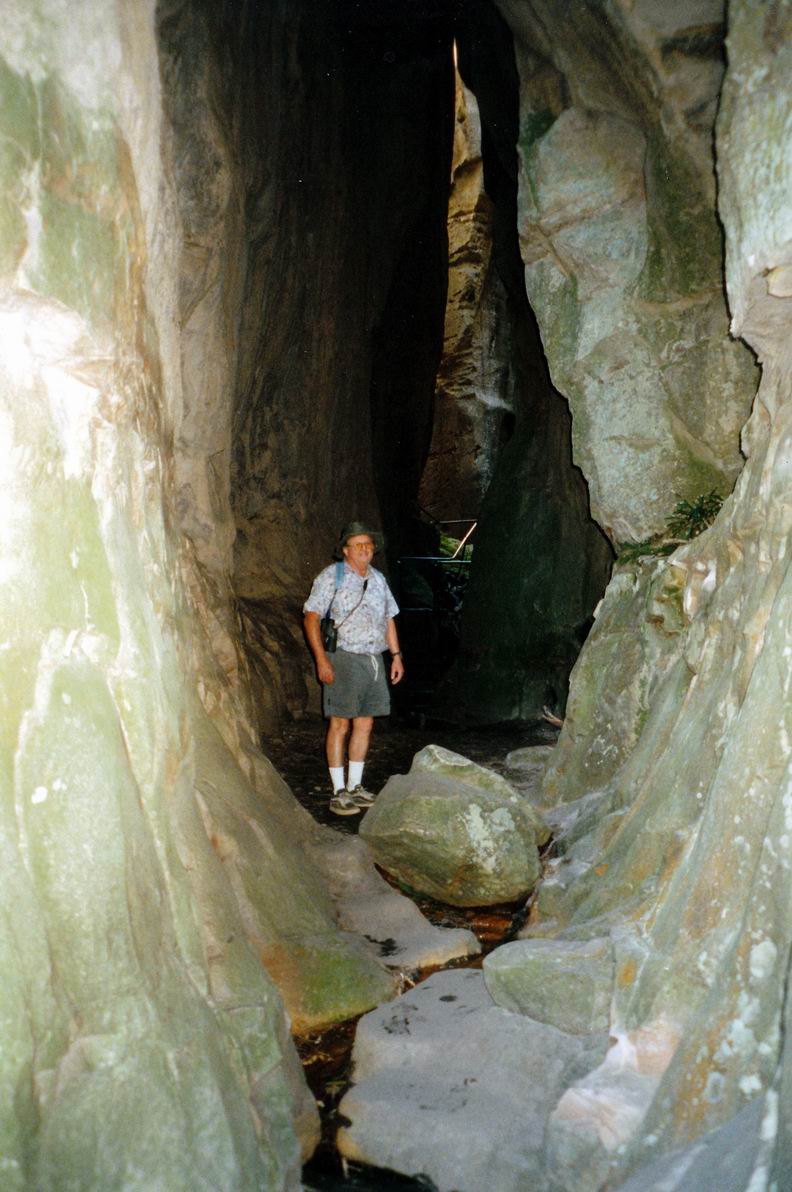 The narrow cleft leading to the Ampitheatre

The best way to describe this was like a big cave without a roof, open to the sky – high up. It has been eroded by water, over time – presumably the water followed fault lines or lines of weakness in the rock, in order to erode so steeply and deeply. 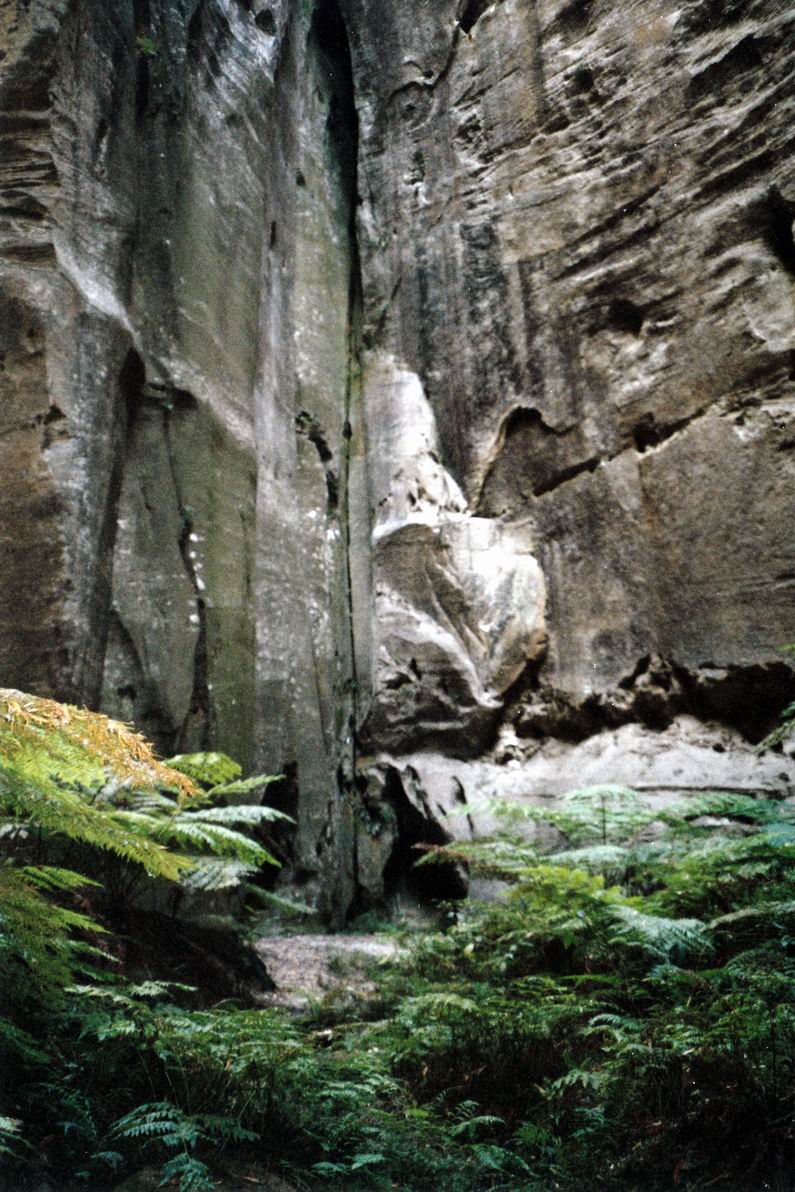 Because of the light, plants can grow in there. These were mostly ferns, but there were also some surprisingly large palm trees – the fan palms of this area. 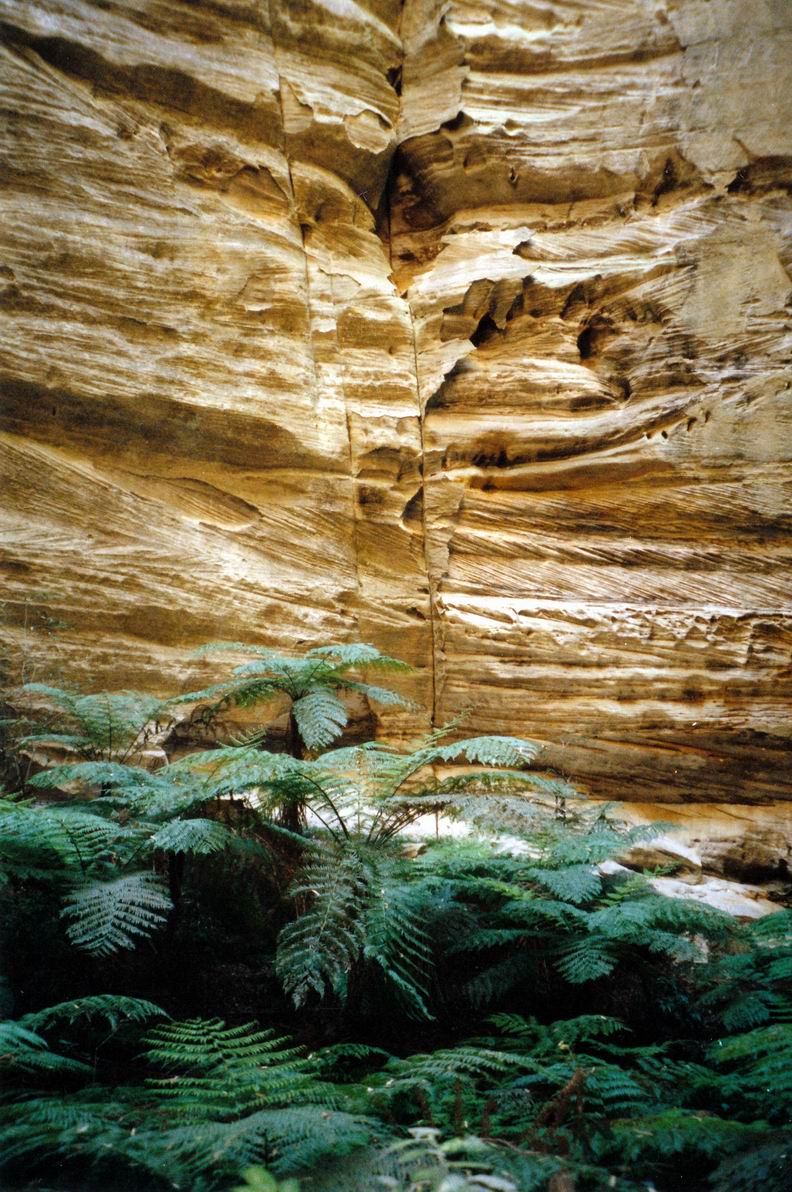 Lush fern growth inside the Ampitheatre

The ladder climb – even though it had a type of protective cage around it – did not thrill me! But it was worth the raised heart rate – very dramatic and grand inside, cool and cathedral like. Sounds echoed in here.

We found places to sit in here and just soak up the atmosphere, whilst eating lunch. We had the place to ourselves. which made it even more special.

I imagined the earth giving a little hiccup, and the very narrow entrance cleft closing! No other way out! Also wondered how this place was originally discovered, pre-ladders. Perhaps it was known to the aboriginals who clearly spent much time in the gorge area. 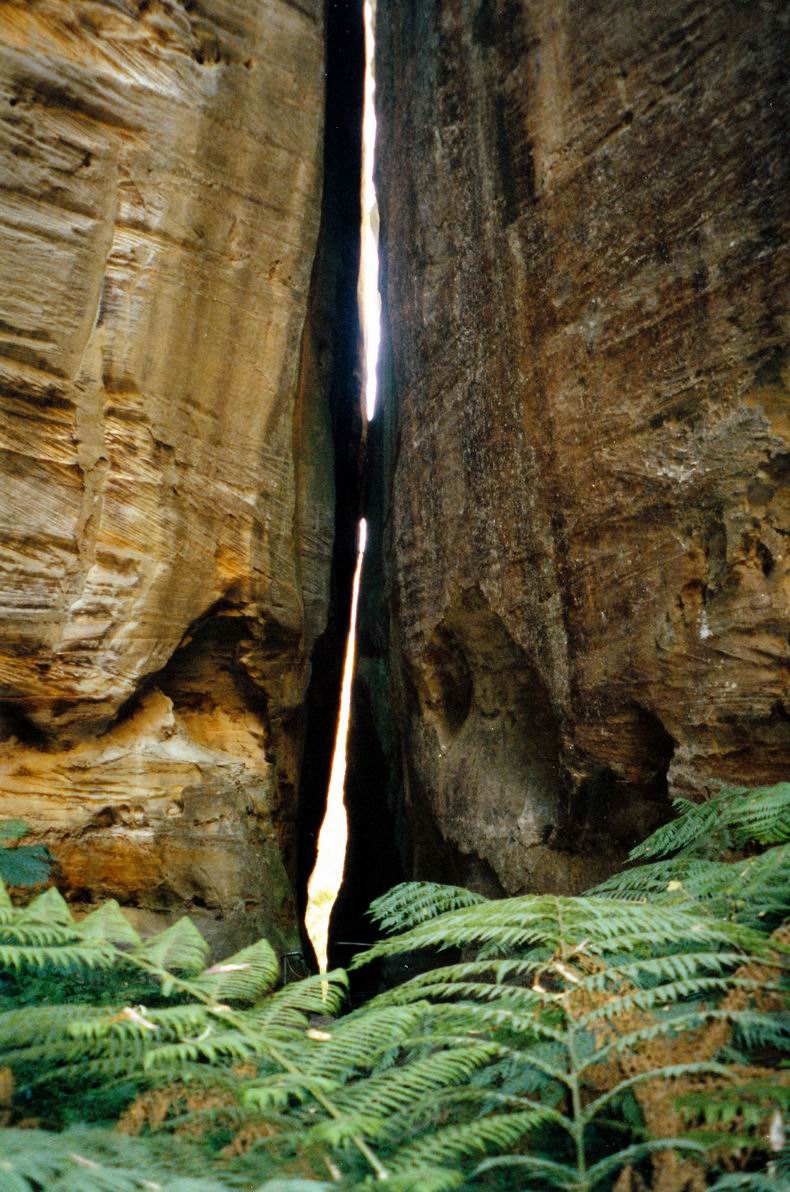 The way out is through there!

Our last side track, back in the camp direction, was to the Moss Gardens – a 650 metre walk from the main track. This was another small, gorge like area, very cool and damp, with a little creek and waterfall. As the name suggested, there were lots of mosses growing, and ferns. The sandstone walls here are very moist which contributes to the humidity and general dampness of this micro environment.

Then we had the walk back along the creek to the campground – about 3.5kms from the Moss Garden. The last part seemed much easier than two days ago – we were not so tired.

Crossing 10 – meant there were 9 more to go, on our way back

Overall, we walked about 13kms today. One does not notice the distances so much when there is so much that is interesting to look at, as you go.

Another lovely hot shower back at camp. Another early night.