I was up early and walked around the area, enjoying the solitude. It really is a lovely place.

We left the caravan park at 7.30am and drove back towards Denham for a little way, to the corner where the road to Useless Loop goes off. Waited there, as arranged, for the talkative guy and his family. They did not show up. We were quite relieved, because we really do not like being constrained by other people.

The road was good gravel, until the Useless Loop turn off. What a strange name for a place! There is gypsum and salt extraction works there, and a little township for the workers. No access for anyone else though – it is a closed town. The salt extracted from here is supposed to be the purest sea salt in the world!

Initially we drove through low eucalypt and acacia type scrub which was quite attractive, but on  Tamala Station that changed to arid saltbush type scrub. 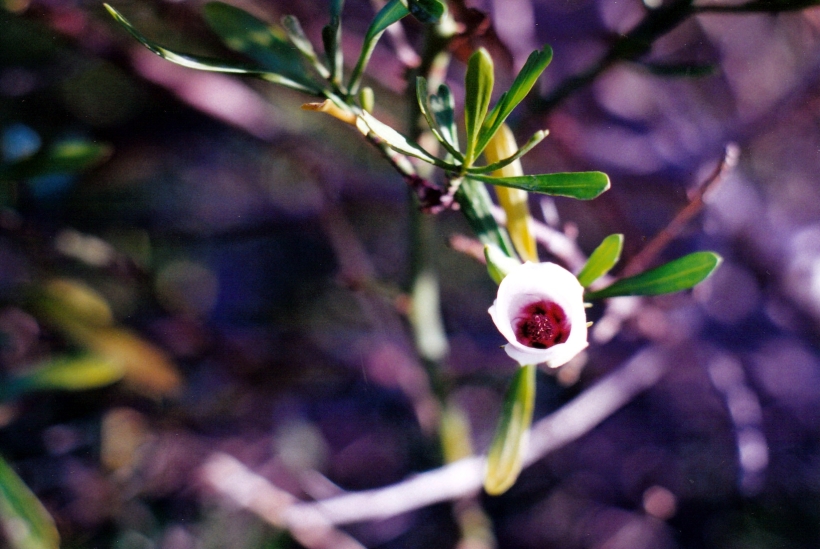 We saw a wild mallee fowl – first one of those we’ve seen.

We passed the turn off to Tamala Station – apparently they had begun to take campers, so we marked that down for future reference – in the unlikely event of further travel this way.

After the Useless Loop turnoff, the road became rougher and eventually turned to sand, where we needed 4WD and the tyres let down. 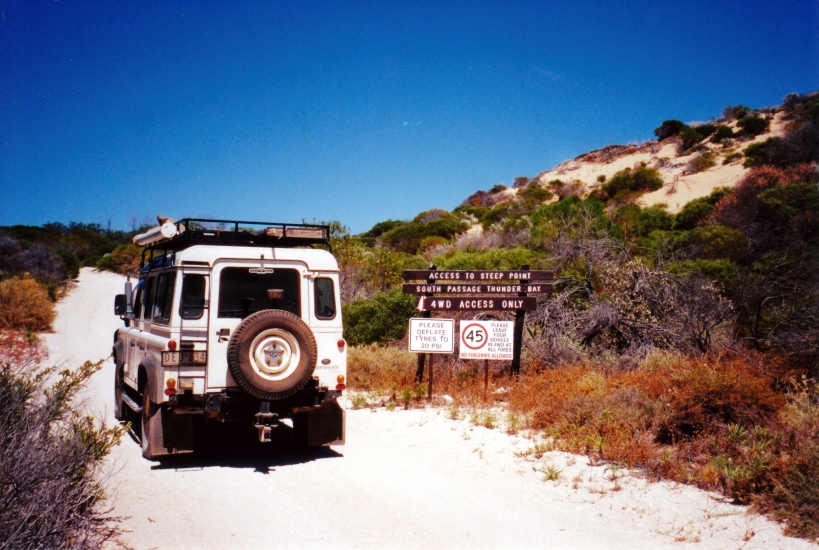 The start of the 4WD required area

The track crossed a causeway over Useless Bight. 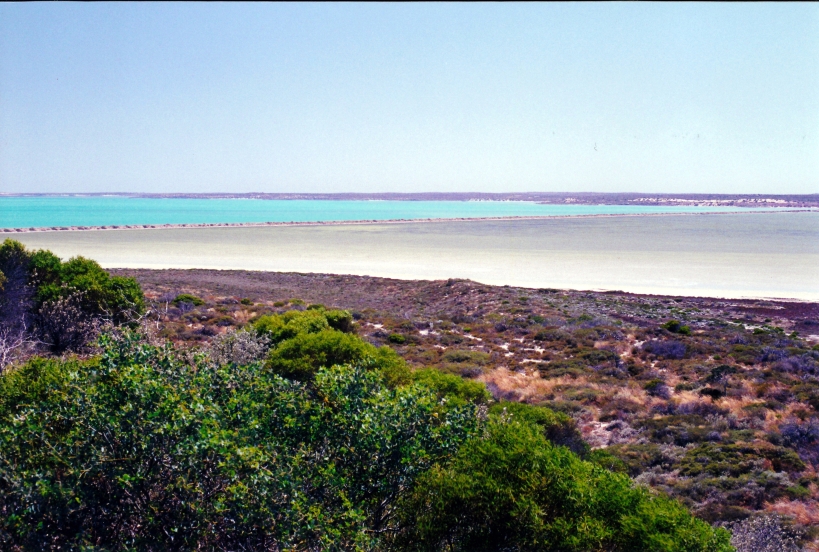 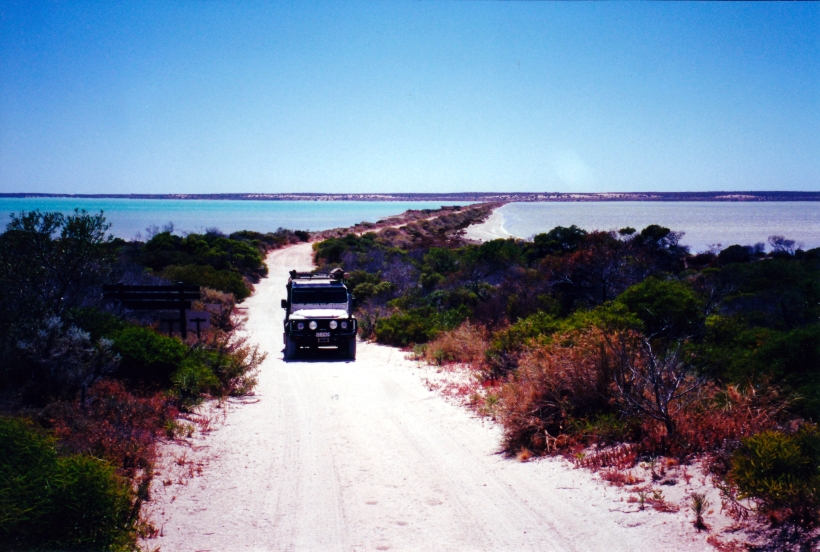 There were some spectacular sand dune vistas – some of these big dunes did not appear to be fixed by vegetation, and so would be moving. There were views of seas that were, in turns, bright blue, browny green, and dark blue. Much variety and a really interesting section of today’s trip. 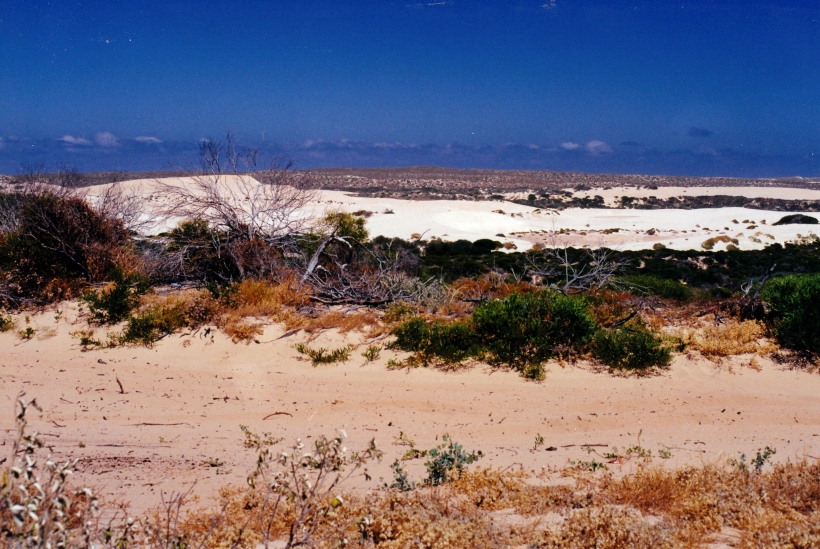 We passed a big, empty-seeming stone house and wondered what its story was. 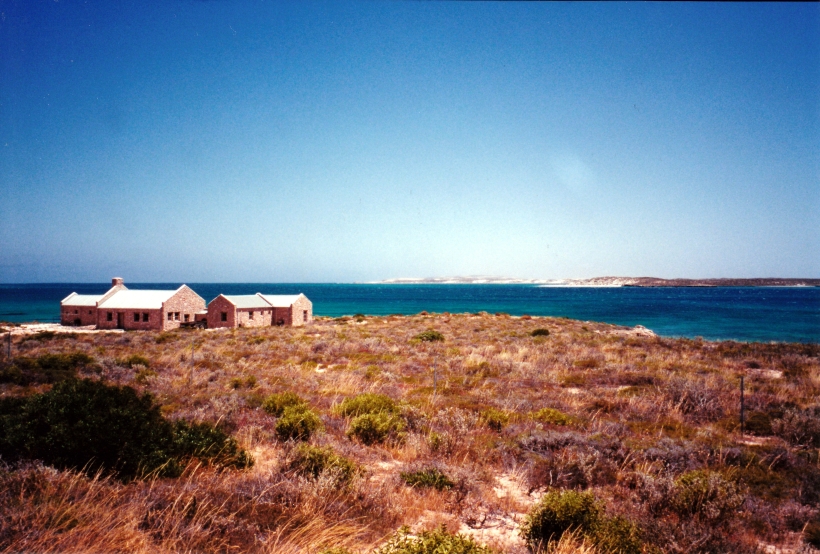 Then we came to the Ranger’s base. There was no one there to collect our $20 access fee.

We drove on across the narrow peninsula of land, to the Zuytdorp Cliffs – just dramatic and awesome. The flat limestone surface of the land ended abruptly at the cliff edges, which in places were 200 metres high. 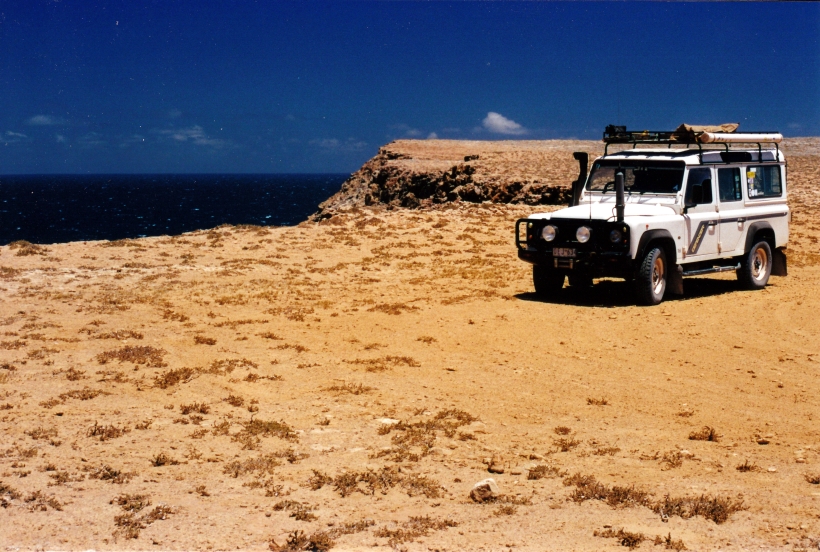 At the Zuytdorp Cliffs – land’s end

The sea was pounding in below us. It was windy there. 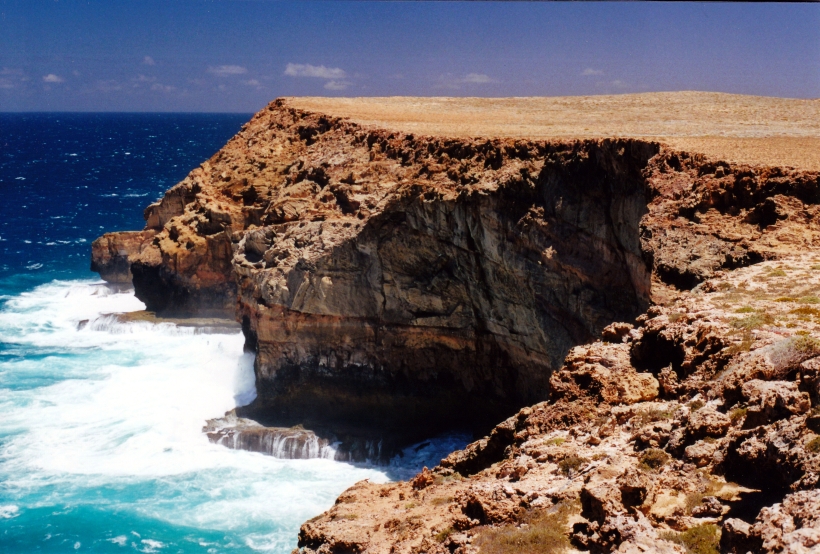 The Zuytdorp Cliffs were named for a Dutch sailing ship that was wrecked in the area in 1712. Back then, ships used to sail from Europe around the Cape of Good Hope (no Suez Canal in those days), and catch the prevailing westerly winds – the Roaring Forties – to speed them across the Indian Ocean. They would then turn north – for the assorted European colonies of Asia. If someone miscalculated and left the turn north too late, the result was an encounter with the arid and inhospitable west coast of Australia – which usually ended badly for all concerned! 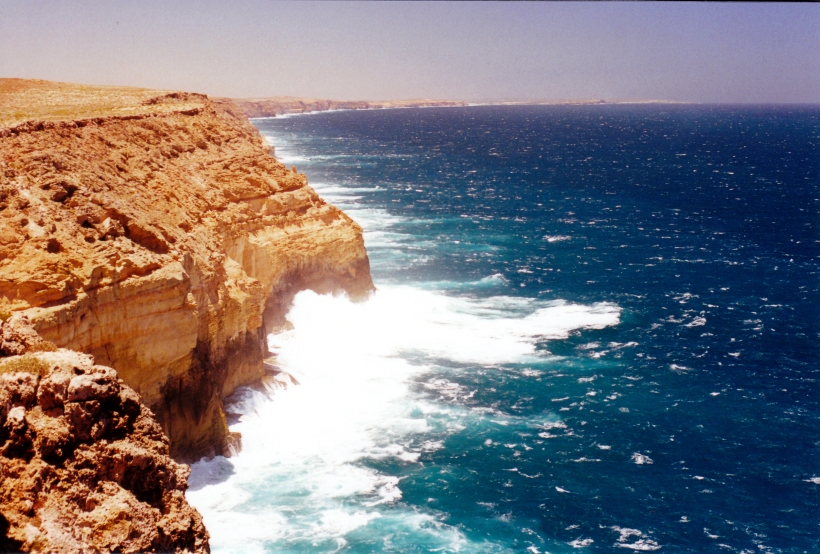 We then drove sort of northwards, to Steep Point – the western most point of the Australian mainland. 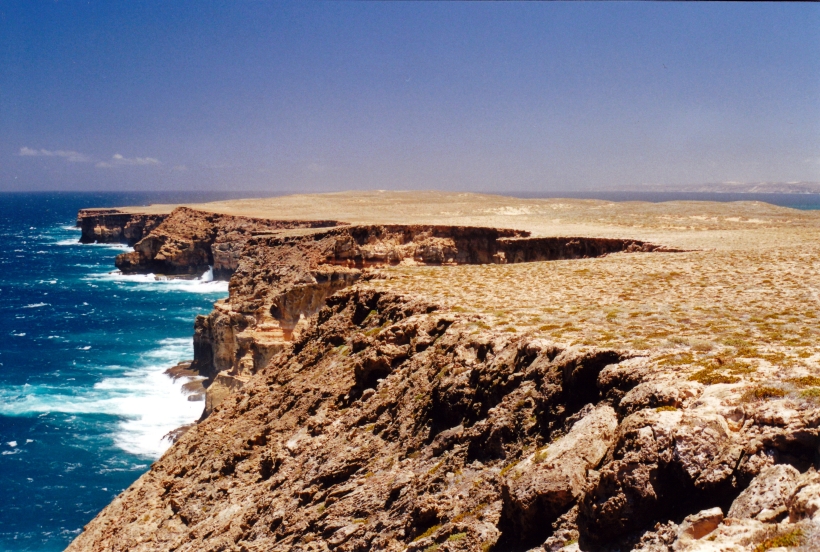 Steep Point in the distance

We added a stone each to the little cairn there, and took photos – of course – by the sign board that told us where we were, in case we’d just rocked up there by accident! 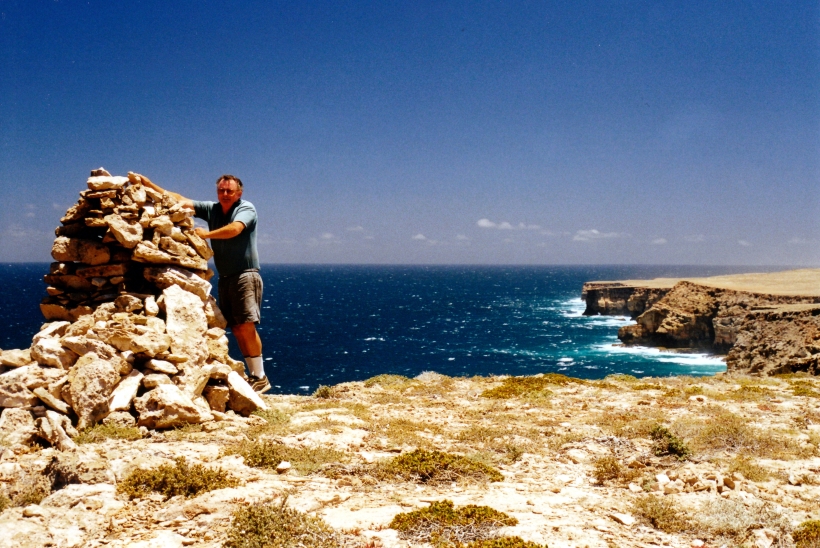 The western-most point of the Australian mainland

So – we had now visited all four of the extreme points! 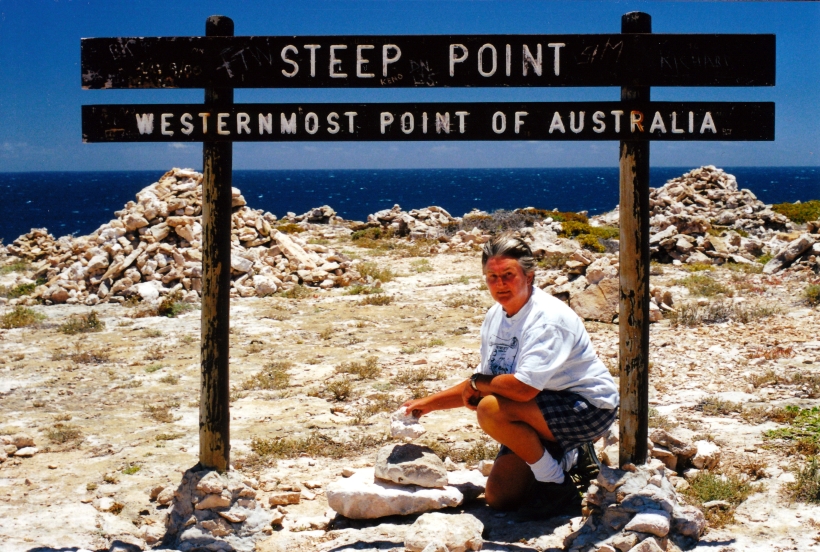 There were people fishing at Steep Point. Some were using balloons to fish off the cliffs. We hadn’t seen that before. The balloons carry their fishing rig clear of the base of the cliff. I wondered how many failed attempts they’d had before they got that right!

John decided to find a beach, or non-rocky water area for us to have lunch and for him to fish.

We took a side track that was ok, and then parked at the top of the last bit of the track, and walked down a steep little dune face to the water’s edge. John then decided he could drive down that, to save carrying gear any distance. I was very dubious, but he proceeded to come down. 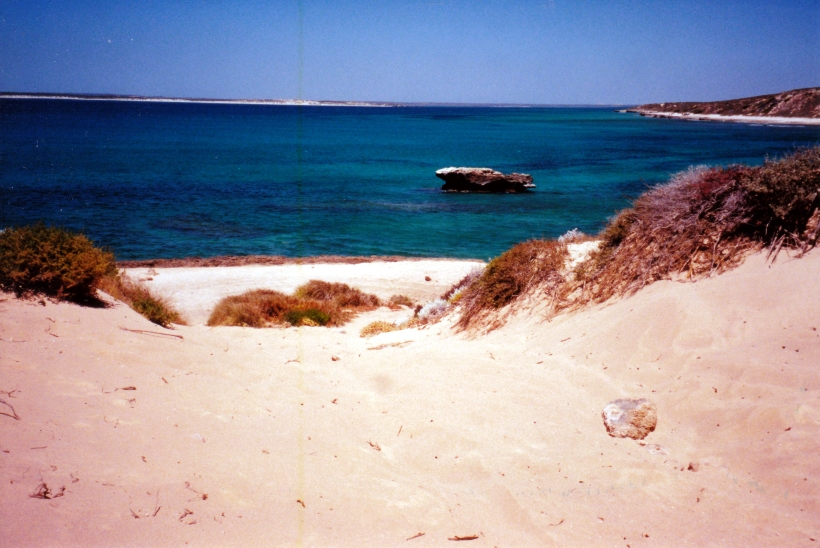 John just had to drive down here to the sea

There were the rusting remains of a 4WD vehicle at the bottom of the track, near the water, which I pointed out to John. He got cross about this, and went to drive back up the dune, to show me I was wrong. However, he got stuck towards the crest, and several further tries at it didn’t move him any further. 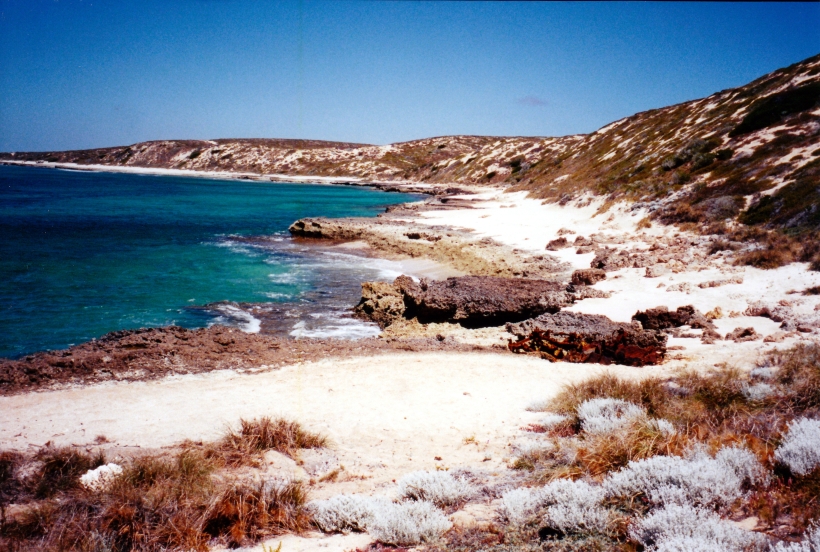 Old 4WD wreck illustrates the fate of those who are too adventurous!

Next was an attempt to winch out. Of course, there were no trees or rocks to help. There was a track closed sign by another track at the top of the slope, so we attached the winch rope to that, but it pulled out of the ground! 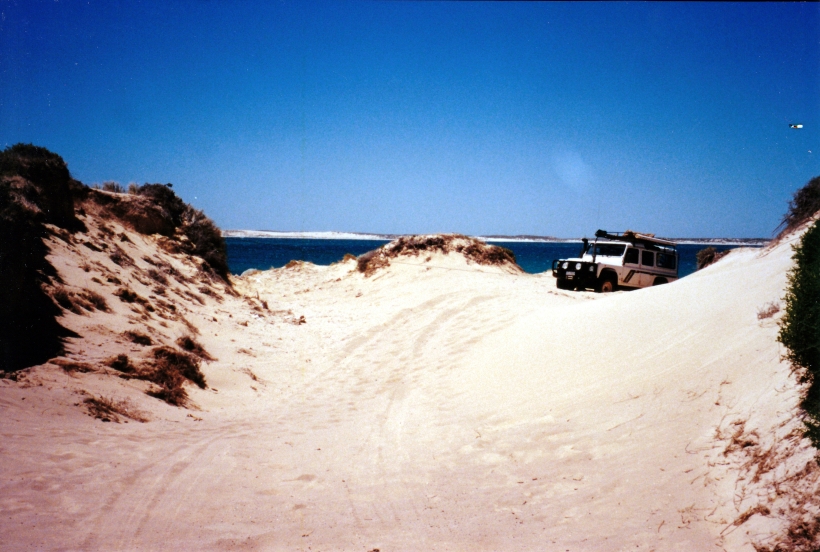 So close to the top, but stuck and trying to winch out using a barrier 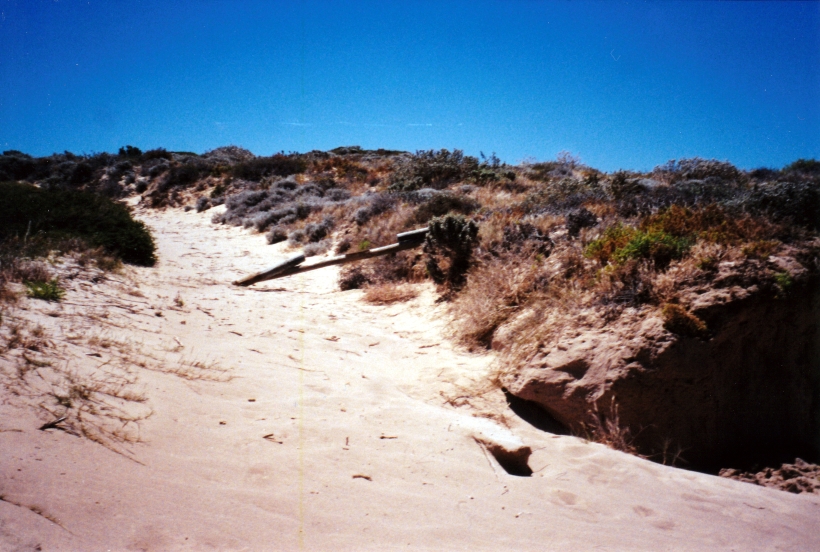 Now we have to repair the barrier, as well………

We dug some sand out – quite a lot of sand, it felt like. Put down shadecloth strips in front of the wheels. We went and gathered what little bits of rock we could find and added these to the shadecloth strips – the addition of the rocks enabled him to just get to the top, on a re-run up from the bottom.

And that’s where he was stuck!

All that took about an hour, and it was hot work.

Apart from being stuck out there in such an isolated place, and thus the likely cost of a recovery effort, I was concerned about how high the tide would rise, so there was a sense of a limited time to get ourselves out.

I was cross at what I regarded as stupidity on John’s part, in the first place.

Thus, we had a late lunch, at a little beach area that was much safer to access. John fished and caught two whiting there. I went for a walk along the beach area. Saw a reef shark there, about a metre long, nosing about in the rocks, close to shore, and a big school of fish, heading off into the deeper water channel.

It was a very pretty area, but wind blown sand was annoying.

Then it was time to start heading back.

There was still no-one at the Ranger base, but we met the Ranger’s wife further on. She’d been to Useless Loop for supplies. She was a very nice, chatty lady. She was driving a Defender 130. She said they’d done several sets of wheel bearings, due to the sand. They now had self greasing ones? Not sure how that works. She did not want our $20 as we were not staying the night.

She told us that the stone house complex we’d wondered about was a holiday house for the owners of Carrarang Station. Carrarang was a nearby station, kind of between Tamala and here. It was, she said, on a freehold patch of land, so even if a National Park was set up in the area, the house would stay. They’d had German stone masons build it. We thought the house certainly had brilliant views, but was isolated.

The ranger couple was employed by the salt company – the area was not yet a National park. She said she loves it out there. They hope that an Edel Land National Park will be set up soon, there.

The drive back was fine. We had to stop after negotiating the sandy sections, to pump up the tyres again. 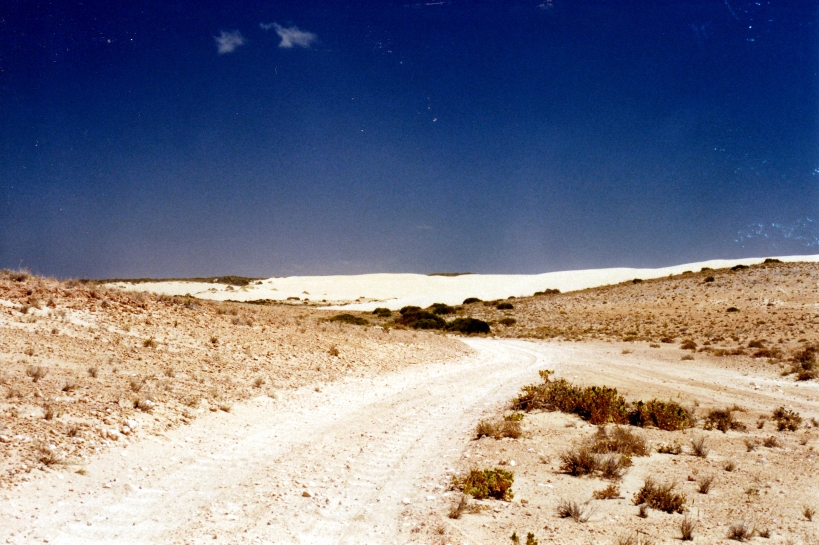 Tracks were a mix of sandy and stony

We reached the caravan just on dusk. The sunset was pretty.

Tea was the whiting he’d caught today, for John, and leftover salads for me.

It had been a long day, especially for the driver, but (mostly) a good one. The round trip was 350kms.

I was very glad we’d made the effort to go out there.