Yesterday’s success was a great motivator, and we went back to the zircon fields, for more.

Before leaving, I wrapped my Band-aided cut thumb in gladwrap, then John coated it in electrical tape. I put it in a plastic bag and wore the green glove over all that! It worked, and kept the dirty wash water away from the wound. Exposure to that could have been asking for trouble! 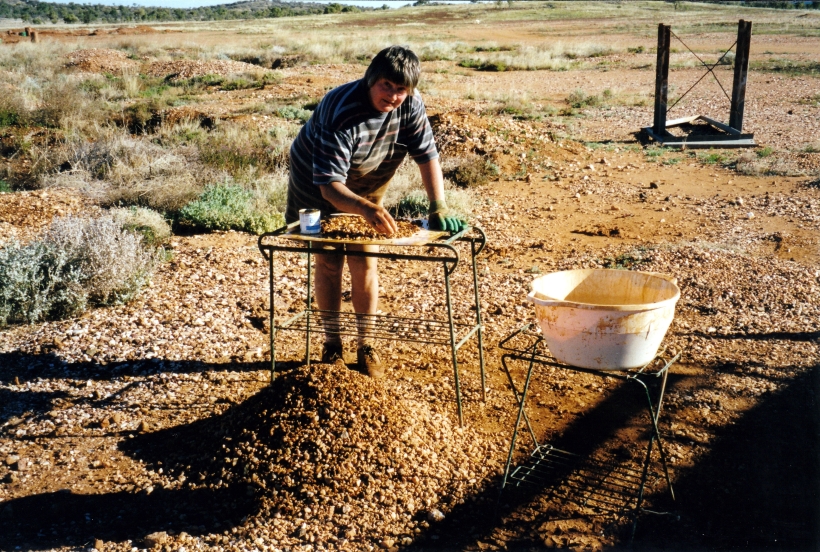 Sorting the washed gravel – with glove on my injured hand

We dug some more in the same hole as yesterday, and seemed to do well, again. Of course, many of the pieces of zircon that are found will, on closer examination later, prove to have cracks or flaws that will make them unsuitable for cutting.

Zebra finches came in to drink in the washing water puddles

I got very muddy from the wash process water splashing on me. As the day goes on, this water gets more and more muddy. We can only carry a limited amount of water out there, so it can only be changed once during the day.

This is not a clean pastime!

The chilly wind started to blow again, through the day.

Got back to camp about 5.30 and headed for the shower. Alas, there was no water! A pipe had broken. They were trying to fix it. I was all itchy from the mud on me. Washed hands and arms in the van sink.

After tea, the good news was that the pipe was fixed and we were able to shower. That was a relief as I’d have hated to go to bed the way I was!

I dressed the thumb, which was very sore, with a melolin dressing and gauze pads. John had a look at it and was quite impressed with the damage! He promised to tell me when he sharpens knives in the future.

It was a cold night.

John was on the computer again, until the power went off. At least, this is ensuring that he cannot lose track of time and stay up too late.