I am still drying fruit. We are certainly getting our money’s worth of electricity, lately!

After lunch, went to the strawberry farm out on the Yungaburra  road, and picked two kilos.

Continued on, then, and went to Lake Barrine. This is a volcanic crater lake, formed from a big explosion of heated gases. Rainwater keeps the resulting crater filled. The lake is surrounded by rainforest, containing a number of large rough barked kauri pine trees.

We left Truck in the car park by the lake and had a brief look around that area, which contains Tea Rooms, in an old wooden building – like something from another era. The Tea Rooms are obviously on the bus tour circuit. They run boat trips on the lake.

We walked the track around the lake edge – a walk of about 5kms. It rained most of the way, which made it a bit dreary. It would be a nice walk to do in good weather. I got a number of leech strikes on my feet – stupid of me to wear just my Teva sandals. There was constant bird noise around as we walked, but the weather and the leeches did not encourage dawdling to look at same.

Back at the car park, having a major confrontation with a full sized tourist bus was – a cassowary! The bird obviously did not want to let the bus move anywhere. Whenever the driver tried to inch the bus forward – with its load of tourists – the cassowary attacked the front of the vehicle. Big bird – small brain – very bad temper! It was totally committed to its cause and oblivious to all us tourists standing around nearby, taking photos. It could have had a lot of fun if it had turned on us! Eventually, the driver stopped trying to move the bus, the bird got bored and wandered off a way – then the driver gunned the bus up the hill and away in a cloud of smoke, with cassowary chasing after it. Most entertaining. Funniest thing we have seen for ages, in fact.

Cassowary determined that the bus will not get past it 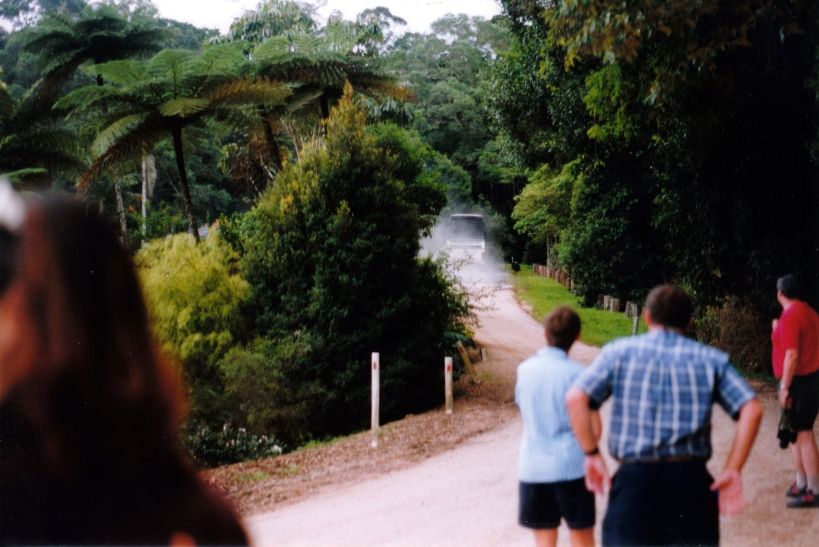 Cassowary flat out chasing bus up the hill

I wonder if this is a routine that bird goes through, on a regular basis, or if it was just having a particularly bad day?

When we got back to camp, the site had been whipper-snippered. There was cut grass everywhere – on chairs and tables, in the towels that were hanging on the chairs, and my wide washing bucket had a hole snippered in it. I was distinctly unimpressed.

Tea was steak and kidney and dumplings.