In the morning of another hot day, we decided to go explore the Riversleigh Fossil Site D, some 60kms south of here – road unsealed, of course.

The turn off was not far from Adels Grove, then we proceeded south. The road was heavily corrugated in parts; in other places there were some quite large rocks exposed in the road. It was certainly not fast driving! I thought it must have been quite a while since there had been a grader over that road.

Most of the way was through the grass land scrub land that was like we’d travelled through from Gregory Downs. Savannah woodland country, to use one of my geographical terms. Dry, of course, at this time of the year.

The Riversleigh site is part of the National Park (aboriginal name Boodjamulla NP) and is also a World Heritage Site, because of the importance of the fossils found here. Many millions of years ago, Like around 25 million years, the area was a rainforest area, with plenty of waterways and shallow lakes.

As it is now, the water then was high in calcium carbonate, When the local critters died and fell in the water or mud, their skeletons were preserved – only to be exposed by erosion in more modern times. Riversleigh has provided much information about the evolution of mammals and the exploration of its riches is ongoing.

Fossil presence was noted in the area in the 1960’s, but systematic investigation really only began in the 1970’s.

Site D was one of the first fossil areas found at Riversleigh. Since then, lots of other parts of the area have yielded remains, but Site D is the only section that tourists can access. Adels Grove does offer a tour to the area, but we prefer to be independent, when we can. Also, to save our money!

We drove a short distance past Site D, to have a look at where the track south crosses the Gregory River. The river looked very attractive, and the ford shallow, so we decided to return there to have our lunch, after going round the fossil site.

The site did not look particularly compelling from the road – bit of a low outcrop and a jumble of rocks. From the carpark, followed the track to what turned out to be an entrance and information shelter. It was man made. but done to look like just another rock outcrop – clever. Certainly it was unobtrusive. 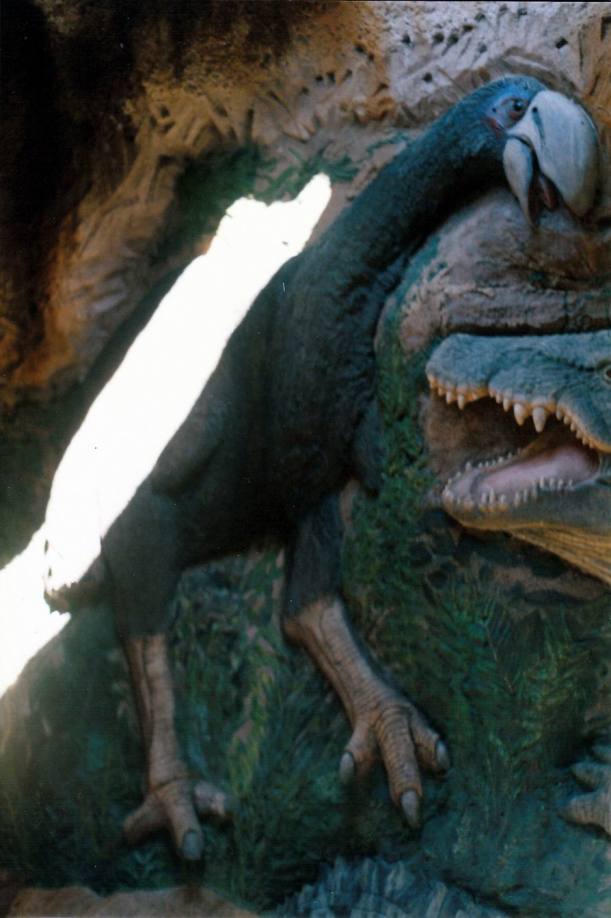 A fossil illustration inside the information shelter

Followed the set walking path around in a big loop. In some places we probably would not have recognized fossils in the grey looking rock, if there hadn’t been information boards! The track climbed gradually and gave some interesting outlooks over the area. The limestone rock around here has weathered into shapes that resemble distorted grey mushrooms, or maybe Darliks?

The remains of a big bird were fascinating. Apart from some of its bones, there was a fall of small stones that were from its gizzard, where they acted as food grinders. Pictures of “Big Bird” on the information board show it a bit like a short-legged emu.

The small stones that were in the bird’s gizzard

We now wished we had paid a proper visit to the Riversleigh interpretation centre at the Information Centre in Mt Isa. We hadn’t realized this place was here, nor how significant it is, so there were big gaps in our knowledge, and lots of questions we had.

Because of the time period over which fauna were living and dying in the Tertiary period, around here, combined with the preservation factor of the calcium, scientists are seeing the way creatures evolved, as well as finding ones they had not suspected existed. This work has been going on in earnest since the 1980’s, with annual fossil gathering expeditions.

While we were wandering around, slowly exploring and taking photos, and out of sight of the road and entrance area, a man in a fawn coloured uniform appeared in the distance, and climbed to the top of an outcrop, where he seemed to talk into a hand held radio. We eventually twigged that he was the tour guide from Adels Grove. When we got back closer to the carpark, there was a Coaster mini bus there, and a young woman in a similar uniform. Their tourists were walking on the track in the distance.

We drove to the Gregory crossing, and carefully drove over the first ford section – turned out there were a couple more channels and fords. Took photos, explored, ate lunch. Drove a short distance beyond the river before going back the way we’d come.

Another part of the Gregory River ford

The river area was very pretty We spotted an Azure Kingfisher in a big paperbark tree – very handsome with its bright ginger tummy.

The Gregory River at Riversleigh

On the way back to Adels Grove, stopped to take a photo of the very graphic sign that warns drivers to be on the lookout for cattle. There are few fences in these parts, so cattle on roads are common. Big beasts up this way, too.

We were hot when we got back to Adels Grove, so went down to the shallower swimming area (as opposed to the one in the main part of the creek, that has a diving pontoon moored). John ventured in too, and really enjoyed lazing about in the cooler water.

Bought icy poles at the shop and walked back to the van.

Later, as we were sitting outside the van just relaxing, one of the staff ladies – V – came by. She’d come down to ask if we would be interested in working here for a couple of weeks. A couple who had been expected here to work had been delayed, or backed out. She explained they were coming up to a really busy period – the couple of weeks when the paleontologists from the Uni of NSW and the Australian Museum, come to stay here and do their annual “dig” at Riversleigh. Plus, school holidays coming too. She said to think about it and go up and see them in the morning, if we were interested. She seemed really nice.

We had a discussion about the idea and decided we would do it. Something “different” – and the area is just so beautiful. We had the time, before we were booked into Karumba. V hadn’t said what we’d actually be doing – we assumed the same as the staff we had seen working around here: men who clean the campground every day; women who look after the shop/office. V did warn that the pay wasn’t huge.

Went to bed really excited about this prospect of a change! If we find we don’t like it, well – is only 2 weeks.