We headed north out of Newman, soon onto the unsealed road to Nullagine. The road was in pretty good condition.

We stopped at Nullagine to eat the lunch I’d packed.

Back in ’93, we were intending to stay here because John wanted to do some prospecting, so we’d driven down from Port Hedland. However, we thought it was a place with a very bad “feel”, not helped by seeing some sort of lock up structure, with bars, and occupants visible behind them as we passed. We’d about turned and driven all the way back to Marble Bar.

It still did not appeal at all to me as a place to stay! Whereas, we had great memories of Marble Bar – despite, or maybe because of – being stranded there for a few days by rain-closed roads. Back then, the Port Hedland road was still unsealed. Whilst the roads out to the south and north had been closed, the little local ones were not, and the caravan park owner had directed us to some great exploring.

We continued on to Marble Bar, through some really interesting country – ranges and hills, flattening out a bit before we reached Marble Bar. 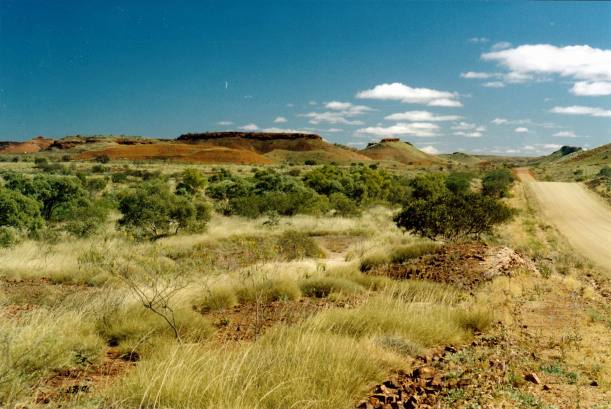 Went into the Marble Bar Caravan Park – $20 a night. The park had grown in size, since ’93. It was still quite a pleasant one. This was the park that was offered to us, to buy, back then! New owners took over, 16 months ago. There is really only a few months of tourist season here, though, obviously, it is far more a visitors’ destination now than it was eleven years ago.

Because we had phoned ahead and booked, they had kept us a nice site. M had a great grassy patch to one side of us for her tent. They were full and having to use a gravel overflow area too, so we congratulated ourselves on our foresight!

The town looked like it had been spruced up since ’93, and there was more information for tourists. But there were still some grotty areas.

After setting up, M and I walked up Water Tank Hill, behind the park, late in the afternoon. The sweeping views from the top were superb. 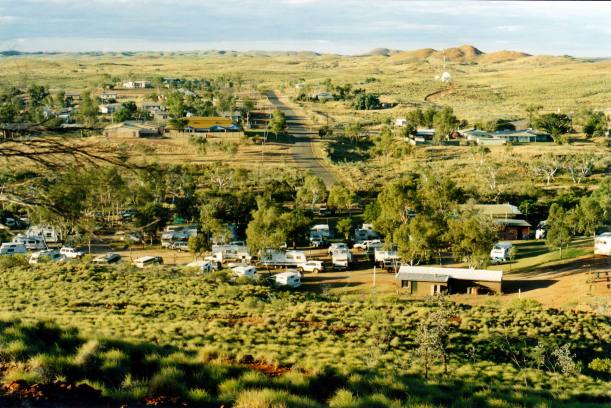 At 5pm, the park owner held a briefing session for all that day’s newcomers – about things to do in the area. Great idea, that probably resulted in at least some visitors staying on longer than they intended.

It was very pleasant to be back in a park that was peaceful and quiet, after Newman. 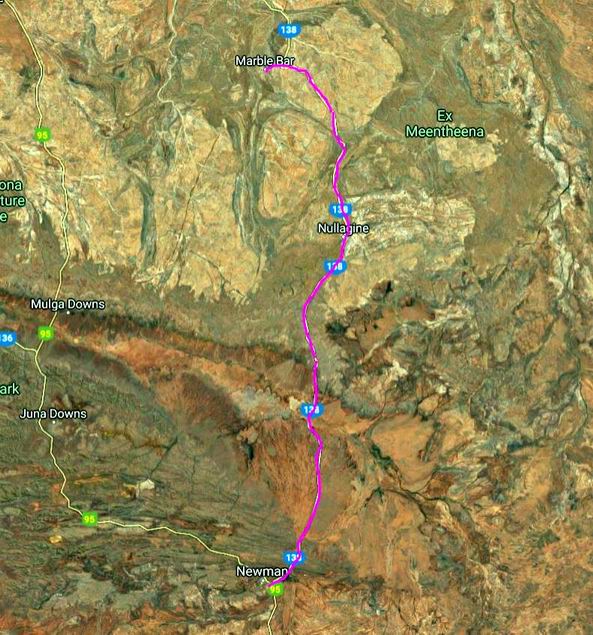