A day off, after working 15 days straight! And most of them had been long bloody days, too. Right now I was feeling thankful that the camp was not more heavily booked.

We needed to go for a drive, just to get away from the camp environs.

Back in July, O had found time to slash the track that went in a circuit, around by Kirkby Waters, on to Bathtub Springs, and thence back to the main track near Mystery Shovel Waterhole. It had been the last track area to dry out enough to take the tractor and we had not had time to explore it yet. So that was today’s destination.

The main track to the north – to the Calvert crossing – was getting pretty well defined by now, with regular guest groups being taken to various sites along it. Of course, the further away from the house and camp it got, the less well defined it became. It was still no speed route – the surface was too rough and there were too many twists and turns for that.

Our first stop was where the recent caving party had done some exploring and found some new caves. We had no intention of exploring down same, but just wanted to look at the opening and the limestone ridge around it.

When you knew what to look for, the fig trees that could be a real marker for caves, were obvious. They grew in such locations because their roots were able to get right down into the ground and find sufficient moisture way down, to sustain them. 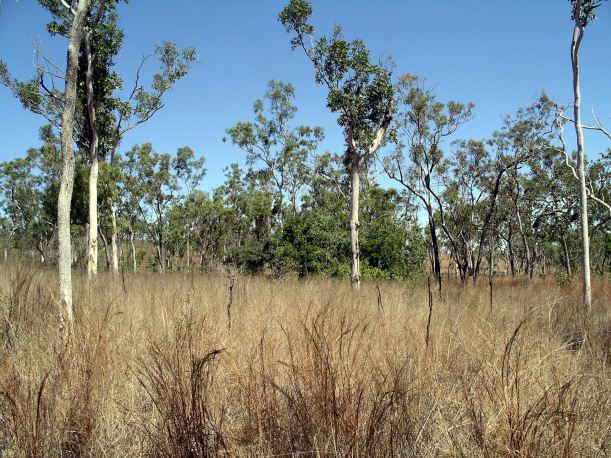 Cave marker tree stands out from the rest of the vegetation

There were also stromatolites in the area.

As we walked up the hill to the cave opening, caught sight of a very large python disappearing fast, down into the cave. Had we’d had any thoughts of exploring down there, that would have been enough to squash same! Then, as I was wandering about looking at things, spotted a big tree snake up in a tree. 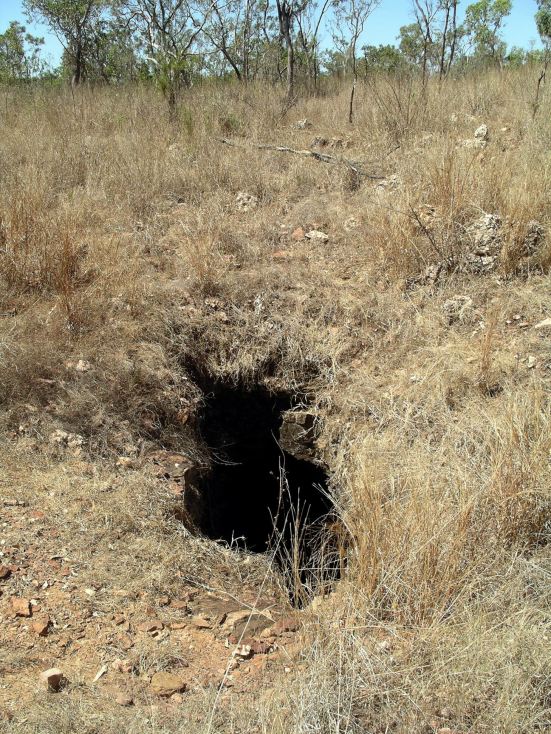 Pays to look where you are walking, on this place 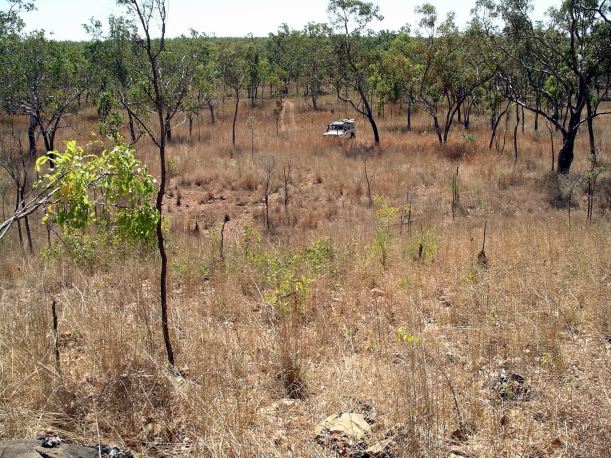 Cave up a slight rise from the track

As we followed the rough and slow track towards Bathtub Springs, came across a few of the feral cattle that were still on the place. They did not seem at all concerned by us trundling slowly along, and just kept on grazing near the track.

It was easy to see that this track had been damp until recently, by the number of bottlebrush trees there were around – and in profuse flower.

The Bathtub Springs area was really pretty. The springs there had created a sort of creek/small swamp, fringed by huge paperbarks.

There were wonderful reflections in the waters, too.

O had a boat moored here for the season. It was the most recently bought one, considered rather tricky, because of an accident involving its previous owner. So, John knew to be careful operating it. 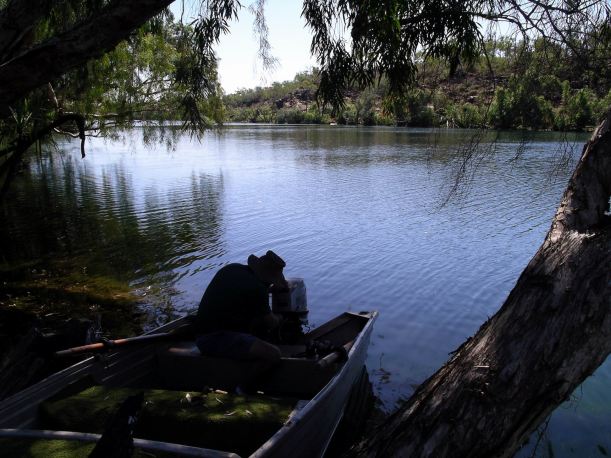 The boat at Bathtub Springs

He took us out on the Calvert River. Just downstream from where the boat was moored, the river narrowed to one of its choke points -shallows and jammed trees – but we were able to motor upstream for several kms on a wide, slow, stretch of the river. 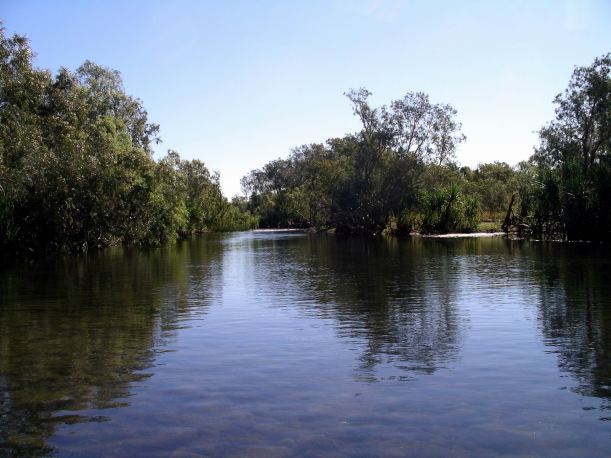 On one of the wide reaches of the long water hole, there was just enough breeze to ripple the surface of the water, which created the illusion of stars dancing on the water.

The river was lined by pandanus and big old paperbarks.

The far bank was, for most of the length of the water hole, a low, red rock bluff. The colour contrasts were great. We could see where higher flood levels had caused damage to some of the vegetation at the sides of the river.

After spending some time on the river, we continued along the circuit track, to where it joined the main one to the coast, not far from Mystery Shovel.

Along there, we deviated to look at another creek and water hole, and saw a huge black feral pig wallowing around in the water, with a white egret on its back, doing whatever egrets do. This was the first feral pig we’d seen on the property.

After that, it was the trundle back to camp, via the house, where we reported back to A and W, so they would know we had returned safely from our adventuring.

This was a wonderful day off, after such a busy period.