We paid $10 each, and got a mud map to drive ourselves out to the caravan park’s own opal mine – “Deuces Wild” – on the Pinkilla field, to the NW.

Took a packed lunch and drove out the Windorah road. This took us across more drainage channels – yes, getting into Channel Country. This is so called because it is a huge area of south western Qld (and bits of adjoining states) that is a flat, arid, flood plain, cut by a great number of interlocking drainage channels, which can flood after good rains in their catchments to the north and east.

There were so many of these drainage lines – of varying sizes – that the road sign read
“Road subject to flooding next 30kms”, instead of warning of individual floodways that we crossed. 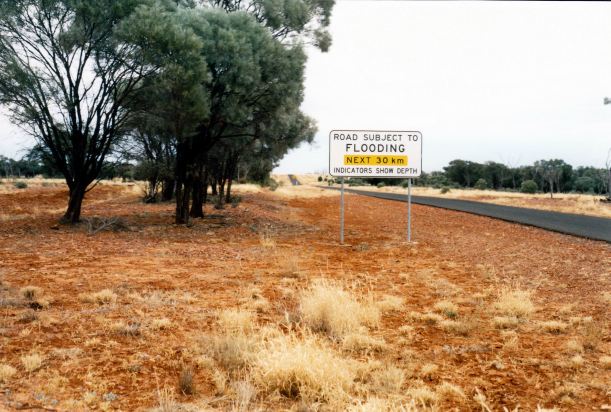 We passed some jump ups, too, so it was an interesting drive.

The turn off we wanted was 62kms out of town. Then we followed minor tracks for some way. We passed a little oil pumping rig, but there was no one around. We wondered if it was still functional? It looked like some pre-historic creature, out in the bush.

Oil pumping rig by the track to Deuces Wild

Found the mining area with no wrong turns. It looked like there had been open cuts, since filled in. So, fossicking was through the mullock and surface spoil, for anything that may have been missed.

The opal out here occurs in boulders, so one really needed to wash the rock pieces to check them. It was hard work, and neither of us could get very enthusiastic.

There were other mines around. One had a shack on it. Another seemed to have had quite a substantial set up – a big shack,  a big aerial and a generator. But there was no sign of any opal mine machinery – or of people, that we could see from a distance. There were some water-filled holes/ cuts, and some big mullock heaps.

Deuces Wild in the Pinkilla fields

It was hard to tell claim boundaries, so we really did not know where the Deuces Wild claim ended, so we were a bit hesitant about wandering about.

We did find a few chips in runnels on a mullock heap. I decided that the opal mining here, now, was more like that at Opalton – harder for the amateur. We did see some evidence of a pinky coloured sandstone layer, in places, though, but no discernable opal colour, or the boulders.

We did more wandering around than fossicking. Ate our lunch out there – it was pleasant just being out in the bush.

On the drive back, observed some surface blows in places where the surface was the sort of ironstone pebbly cover that meant ground bare of vegetation. There were also sudden outcrops of shincracker rocks. We wondered of this was an opal area where there were more opal occurrences to be found? We wondered about the history of the area. Was it a place of old diggings where the modern machinery came in after and dug cuts where there were lots of old shafts? If so, there could well be more opal to be found – if Stephen Aracic (writer of books about finding opals) is right that many of the modern miners do not know the “signs” in areas that have never been dug.

There had been a few drops of rain as we drove out to the mine area, and through the day there was a build up of grey cloud, but no rain of any note.

Back at Quilpie, we drove out to Lake Houdraman, to the NE of town. I was surprised how big this was. It was a lovely spot, with lots of trees surrounding the lake – would be a great bush camping place. There was lots of bird life to watch – including brolgas, pelicans, grebes, ducks and the like. I would like to go back out there for a longer time – it was late in the day when we got there today – and suggested we bring a picnic lunch out here, tomorrow.

On the way back to town, saw a family of five bustards – or plains turkeys – wandering in the grass and scrub – lovely!

We bought some wine casks, to top up the supply. It could be a while before we get the chance again. They were $16 each for mediocre quality ones, but that was all that was available.

John tried to phone the lease holder of the property the Seven Wonders mine claim was on, to the NW of here. Whoever answered the phone said the boss was away on holiday. We had hoped to be able to camp and fossick out there, but the young couple who had set up a camping/mining operation out there, had split up, so the venture had closed. John has long been fascinated by the name and hoped that the lease holder might give us special permission to go out there – but not to be.

John played computer games till the early hours of the morning.