We were away early. Sleeping late was not an option in a place such as this!

Not far from our overnight stop, I did manage to convince John to slow down, for a little sightseeing! It was still the season when whales and their calves were to be seen off the coast, and this was an experience we had not encountered before.

Detoured south from the highway, to go to Head of the Bight. Here, we paid $12 for entry to the whale watching area. From the parking area, walked to the viewing platform area.

We were absolutely thrilled to see two whales with calves, really close in to the cliffs below us.

These creatures were fascinating to watch, just lazily and slowly swimming around, with the calves playing around their mothers. It was so pleasing to know that, these days, they were mostly safe in a place such as this, and not subject to the hunting depradations and cruelty of earlier times in the Australian colonies. Just a pity that this is still not the case the whole world over. Superb creatures…..

We stayed there, watching the whales, for over an hour. It was the most interesting thing I had seen for years!

Then it was pressing on to Ceduna, passing through the quarantine check point not far before that town. We did not have anything to hand over – the food supplies were actually getting quite low. It was ages since I’d done a comprehensive food shop – Broome, Over the last couple of nights, I’d made meals that used up what vegetable matter I had on hand.

We obtained a powered site at the Foreshore Caravan Park, in the town. It cost $19.50, after discount. We were informed about the security gate arrangements and codes. When John asked about the TV reception, he was informed by the lady that it wasn’t the best. He was not happy about this and was actually rather terse with the person.

After setting up, we walked out onto the jetty and along its length. From out at the end, the town looked deceptively attractive. Then walked through the town, and bought some food for tonight and for a sandwich lunch tomorrow.

We were browsing in the Information Centre, when an indigine came in. I think he was demanding something – to use the phone, perhaps,  and was very unpleasant to the lady operating the place. He told her it was “a blackfellas town and we can do what we want!” It was quite an embarrassing display to witness, with her speaking politely to him and trying to be reasonable, and him abusing her. I don’t think he was sober. After he wandered out again, she indicated scenes like that were not unusual.

We took Truck out – we’d had to unhitch on this site – and bought a dozen oysters for tea, at a seafood sales outlet. One great thing about the coastal towns in this region is the excellent seafood.

From dusk, and well into the night, there was a gathering of locals on the foreshore area, near the caravan park. They were very noisy and argumentative, and it was not pleasant listening to the ruckus.

We had previously found the Shelly Beach Caravan Park, out of town, a much more peaceful place to stay, but John vetoed going out there this time, because he thought the TV reception was better in town. Thoughts of karma crossed my mind……..

John watched the football preliminary final, after tea. Between the poor TV and the external noise, it was not the quality experience he had been expecting. We might have been better to have stayed in Kalgoorlie until after the weekend, and then had a more pleasant time across the Nullarbor – but I did not think it wise to say so.

John slept in a little in the morning. He has had some pretty tiring days, one way and another. Also, his body time and that of the outside world are not yet in synch.

Today’s was a beautifully scenic day’s driving. We called in at all the wonderful coastal lookout points. For roughly 100kms, the highway hugs the coast. Here, the Nullarbor plain just falls into the ocean in steep cliffs. It makes for some very spectacular cliff views. It is also an area where one should be wary of driving – or walking – too close to the edge, which can be quite undercut.

The flat surface of the Nullarbor Plain is evident 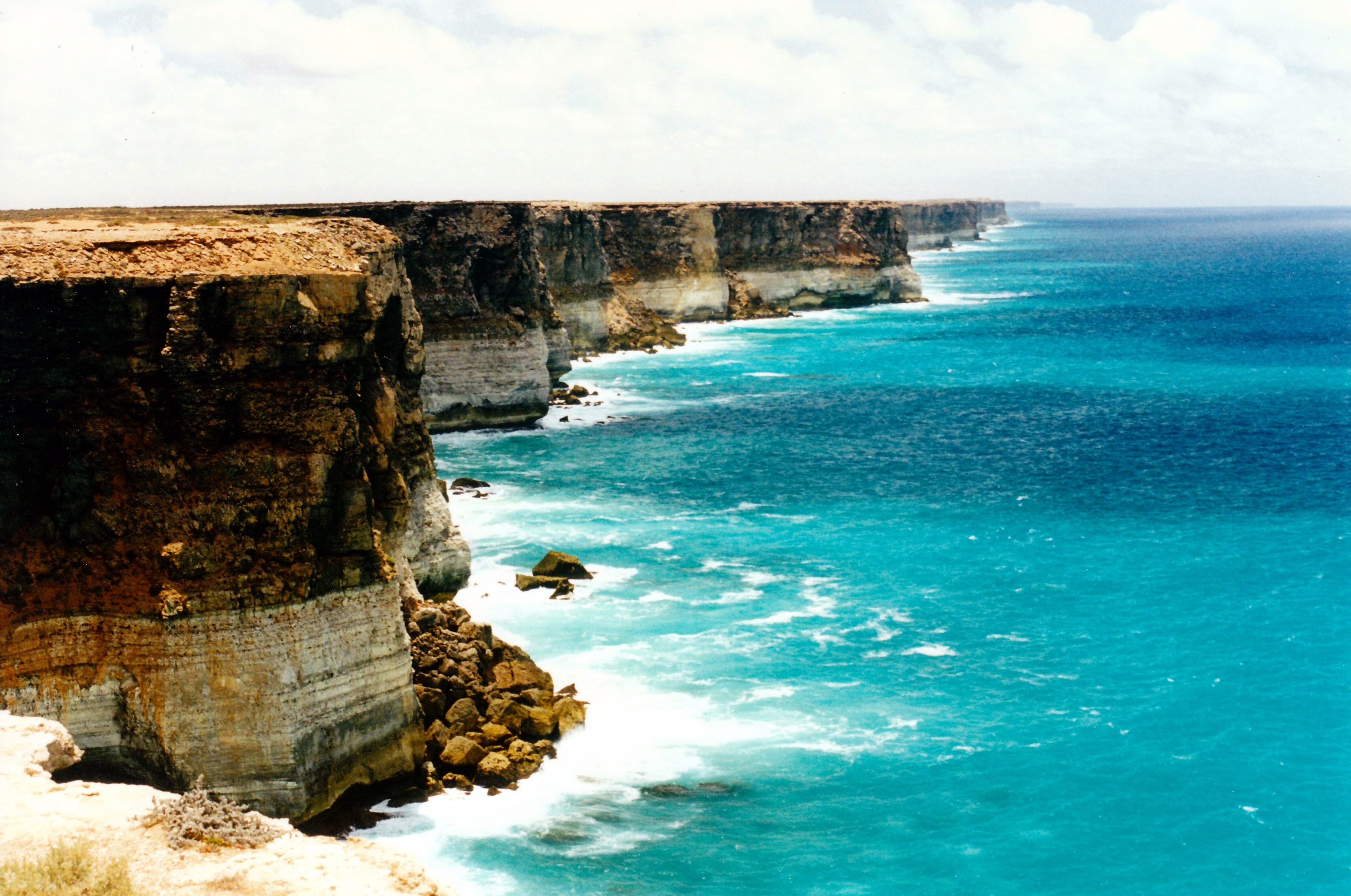 The Nullarbor cliffs stretch away to the east 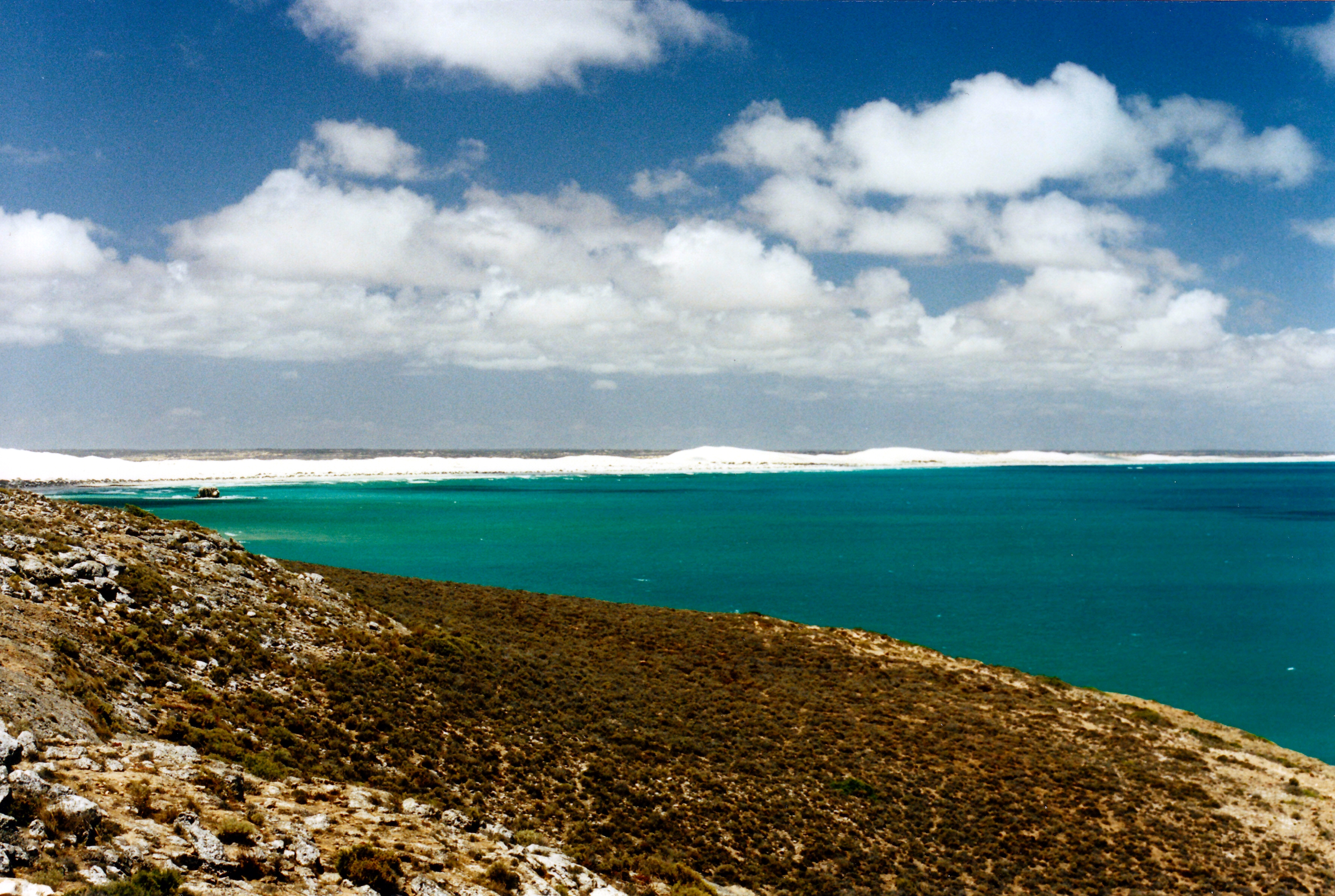 At the Head of the Bight

We had lunch at Head of the Bight.

After this, the highway traversed a treeless section of the Nullarbor – from which it derives its name.

Just before we got to Nundroo Roadhouse, we stopped to help a couple of German backpacker girls, who’d had a blowout on their old station wagon. They’d made big black skid marks on the road – they were lucky not to have rolled it! They were a bit shaken. They did the labour of changing their own wheel, with John telling them how to do it. It was a retread that peeled off. They did not have matching tyres, either.

That stop took about an hour out of our day.

At Penong, the little town with lots of windmills – which always seems rather surreal to me – we turned south on the unsealed 21km track to Cactus Beach.

Some of the windmills of Penong

I’d forgotten that, on the way to Cactus beach, there are vivid pink lakes and large white sand dunes. It is really beautiful. 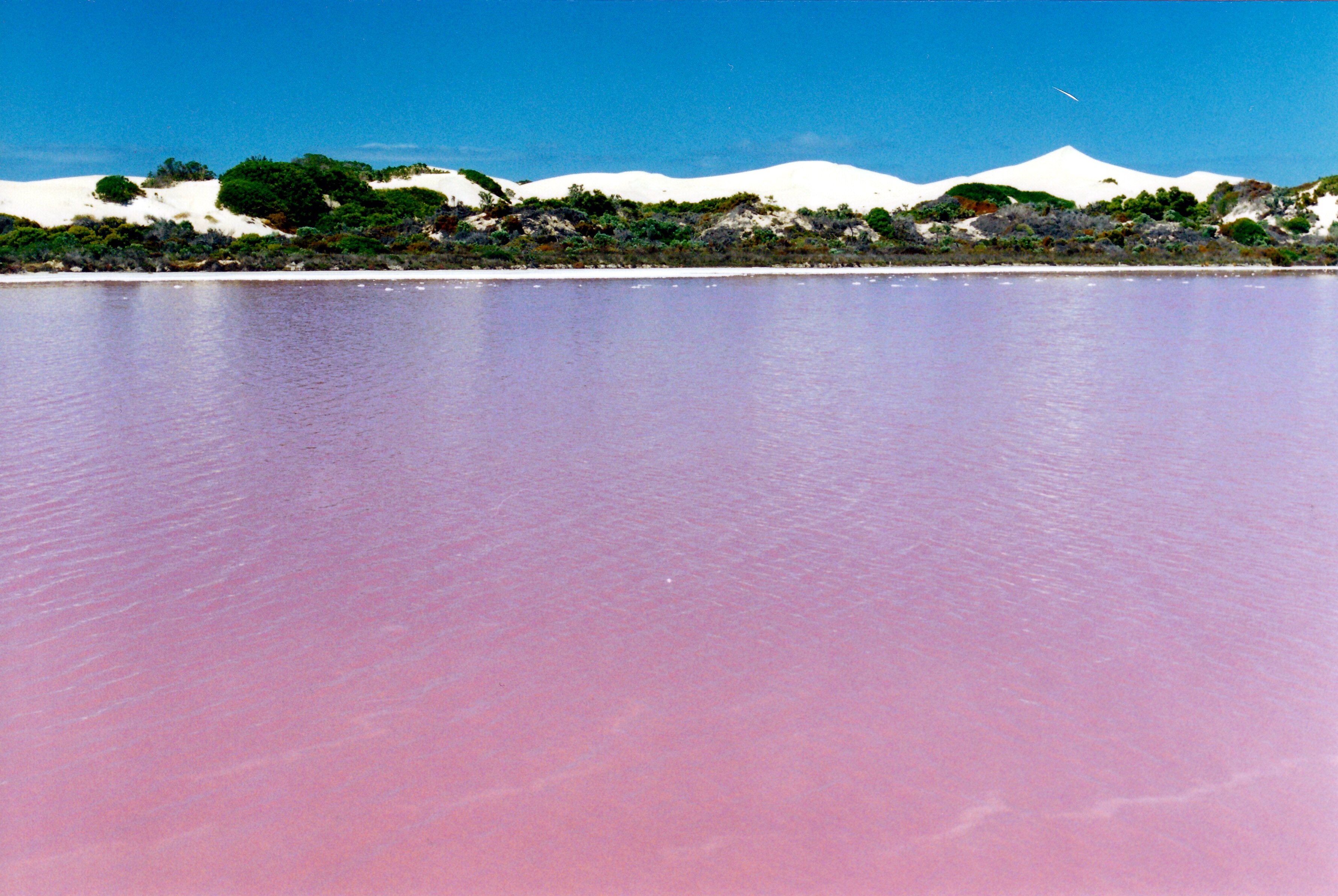 Cactus Beach is well known in surfing circles for having some of the best wave breaks in Australia. We came here in ’93 at the behest of one of the offspring, and loved the “different” nature of the place. We do not surf, but the beach, views and sunsets were superb.

It is also periodically frequented by great white sharks, but this does not seem to deter the keen surfers who congregate here.

It was getting quite late when we reached there. Fortunately, we knew the layout from camping here in ’93. There are little camping bays in the low scrub, and every so often there is a toilet – a circular wall made of chunks of local  limestone rocks, about shoulder high, and with quite a few gaps.  Inside is a seat on a half drum, containing a heavy duty garbage bag! These are collected and replaced with clean ones, each day. It ensures there is no pollution of the fragile environment here, from toilet waste – though I am not sure where all the used garbags go! 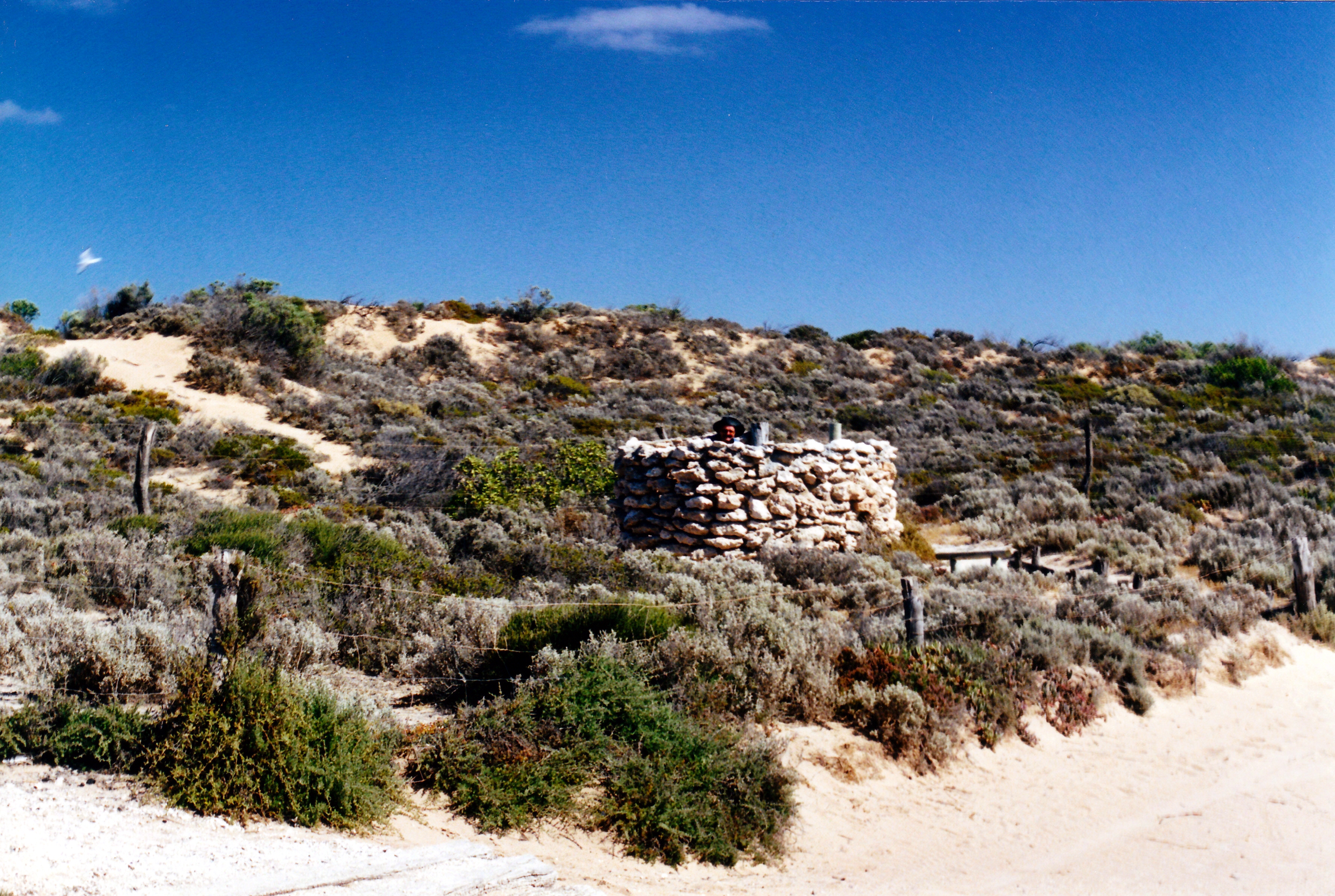 We could not find anyone in charge of the place, so set up in a little camping bay, where there was ample room for the  van. It was all unpowered, of course.

It was almost sunset time when we went for a walk on the beach. I collected some shells.

Sun going down at Cactus Beach

Back at the van, while a was getting tea, a man came round to collect our fees of $6.60 each.

Tea was gazpacho, coleslaw, mashed potato. John had a tin of tuna as well.

Afterwards, I had to have a cook up. I made potato soup, mashed potato, a tomato and onion pasta sauce. I couldn’t cook all the vegetable matter we have left, so decided to try to give some away, or else just forfeit it at the checkpoint.

Unfortunately, the night was too chilly for us to sit outside and watch for the little marsupial critters that we saw here in ’93.

The stars were really bright. I saw a falling star!

It would have been great to have stayed a few days here.