It was a hot day that was windy in the morning, but by night there was a bit of a breeze.

Les came down and told us he would take us to see art. We were to meet him in Kalumburu, as he had some phoning to do – to try to get the phone put on to Honeymoon, for starters.

We drove in, and went to the Mission to get our gas bottles filled. That took half an hour. The young Irish guy that looks after the fuel centre was so slow, and rather strange. Gas for our two bottles cost $31.50. 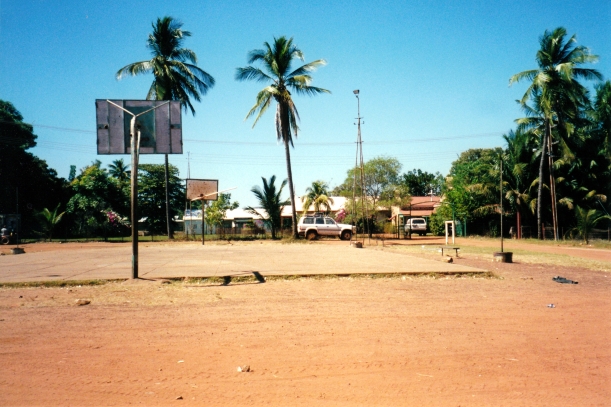 Sports court at Kalumburu, with the Mission behind

I bought some oddments at the store, and then we sat in Truck for an hour, waiting for Les. It was interesting, watching the passing parade of people, here. Eventually, John went in to ask Les how much longer he’d be, and he appeared.

Then we drove around the settlement, looking for R. 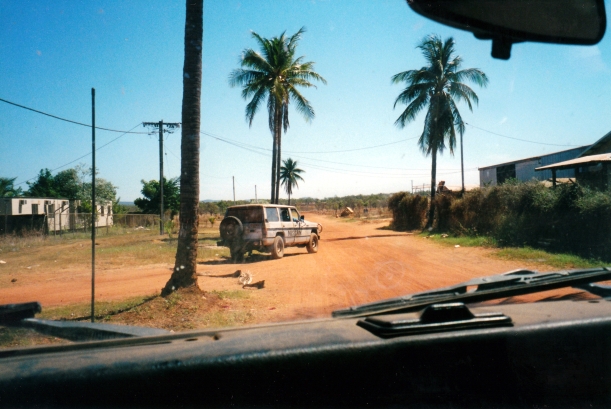 Our first stop was out at Marra Garra – the barge landing. We were surprised to see a great deal of mining equipment here – a company called Striker is setting up to explore for diamonds. A track has been pushed through Carson River Station to the back of Ellenbrae Station, to get the gear up there. There was one white man relaxing and fishing there – it was his job to mind the equipment. 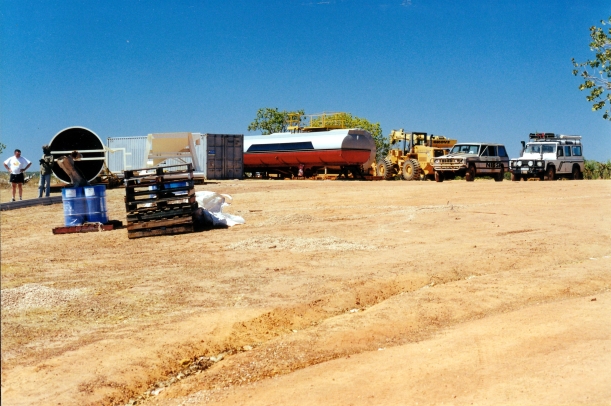 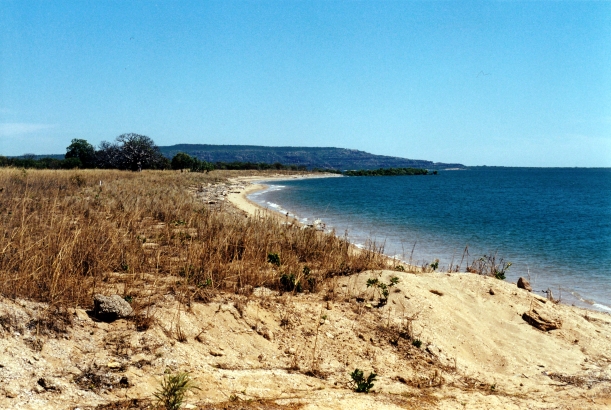 The coast at Marra Garra, looking across to the King Edward River mouth

We then followed Les up a defined track, but he stopped at a creek and decided we were going the wrong way. Further back along the Marra Garra road, he took to the bush and blazed his own track with the Nissan, for over a km. We followed, through the high, dry grass, hoping we wouldn’t rearrange something vital on a hidden rock or ant hill. It was rough. 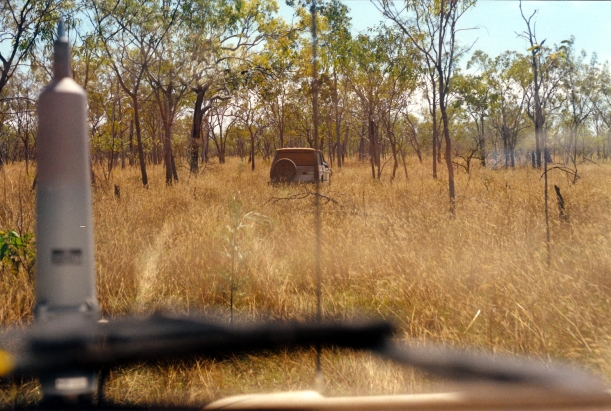 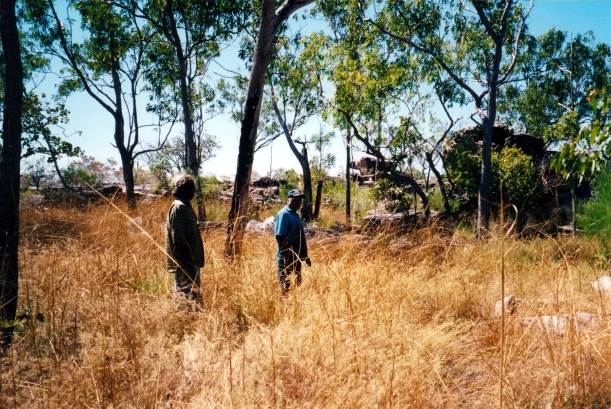 We came into sandstone pillar type/Lost City formations and then walked a few hundred metres. Under a couple of overhangs in cave-like formations in the sandstone, there was much art work. It seemed to my very inexpert eye to have elements of both Bradshaw and Wandjina styles.

Les was uncertain of the origins of it, and asked if we could figure out the meanings of it all! It is sad that loss of culture resulted from the Mission years – they did much that was beneficial, and much that is now seen as regrettable.

We had to scramble up into the rocks to get to a second lot of art.

Les said it was alright to take photos.

Then we backtracked through the bush to the road. Les went off to town to make some more phone calls, and we went back to camp.

We’d gotten some bites from green ants, out in the bush, and they were stinging a bit.

Les said that he was going to take us out to the King George Falls, to the east of here, some 75kms away. He said there were tracks through their lands to the river. It was a really tempting offer – Europeans can usually only see the Falls from the sea, as part of a Kimberley cruise, or by private boat. But we were certain that the going would be slow and rough, and thus more than a day trip – and Les does really have a business to run! Even if he is rather casual about it, at times. We told him that we were grateful, but we did not think it was good to take him away from the campground for too long.

After lunch, we went for a walk out to the bore, for exercise.

The bore and genset

We had a final drink with D and R, who leave tomorrow to go camp at the King Edward River.

Young M, the crane driver from the Argyle Mine, brought John back some oysters, so John had those as an entree to tea, which was fries and bluebone, followed by tinned apricots. M said he was coming back here for his next three week off spell. That would be great for Les, because M would do quite a bit of helping about the place.

Les confirmed that the big snake, last night, would have been a king brown. He said they are attracted to music! The shed inhabitants certainly play that loudly!