This was another hot day for driving. We took the Diamantina Development Road out of town.

At least, the first part was scenic, through the range country. We had travelled this road before, but coming north, so this time we got to look the other way!

The road was, mostly, a narrow, single, sealed strip, with reasonably wide gravelled shoulders. In places, the edges of the sealed strip were crumbling and jagged. The Driver hoped to be able to pick the places to move to one side for approaching traffic. Fortunately, this was rare. We crossed a number of cemented dry floodways, notable mostly for the scenic variety provided by the lines of trees that signalled their approach.

Once south of the rather forlorn little settlement of Dajarra, the country became flat and even more arid looking. In that flat country, the towers and buildings of distant Boulia stood out on the horizon, as we approached.

The main street of Boulia, with its central islands of green grass and trees, signalled a town that was trying hard to make the best of itself.

We had reached there in good time.

Took a powered site in the caravan park and were able to pick a site with a cement slab, that backed onto the Burke River. This still had water in it, though it was fairly low. $15 for the night.

Had a quick late lunch, then walked across the road bridge over the river, and up along the main street, just looking around. Went into the Information Centre/Min Min Centre, named for the mysterious lights that have sometimes appeared to travellers in these parts. We browsed about the “free” part of the centre, which was well set up and interesting, but did not pay to visit the specialized section on the lights. We had seen our own Min Min lights, in the remote Kimberley Mitchell Plateau, in 1993!

Just relaxed at camp for the rest of the day. 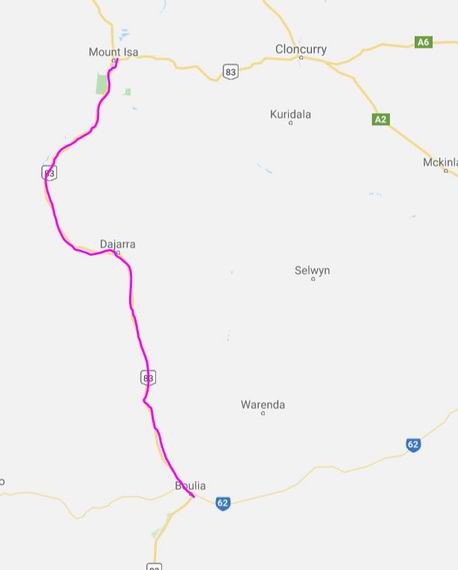