Temperature in the high 30’s today. I was starting to wonder just how high it would go by, say, December.

Back in the office, S had obviously been sending notes and photos, from the office computer, to her friend in HO. She had gone so far as to install one of her personal photos as the screen saver.

Things seemed pretty much in order, though looking at the Daily Reports, it appeared that S did not yet seem aware that HO did not necessarily need to know every tiny detail – especially of things that went wrong! I suspected that R might soon set her straight!

Having been absent for a few days, the rapidity of progress here was so evident.

A firebreak had been cut, right around the perimeter of the site. Good move, I thought, but it would be yet another Contingency item, not having been thought about in the original planning.

The kitchen/diner  modules had all been placed in position – all 16 floors of same. 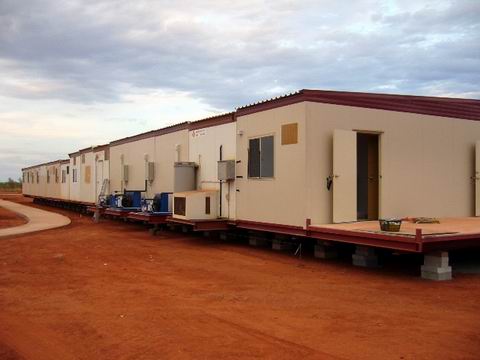 Work had commenced on the verandas for the Pod 2 SPQ’s. Apparently the roofing on the long kitchen building had to be replaced and that work had commenced. Another couple of the men were working on the inside of that building.

Two more SPQ’s, destined for RV2 arrived by truck. These were steadily accumulating in our lay down area. I would have to catch up on the serial numbers of things delivered while I was away, plus get the delivery paperwork in order and sent to HO. S had not done any of that work.

One of the men cut his forearm when a piece of roof steel flipped up at him, in a sudden gust of wind.  First aid job for me, and another Incident Report to complete.

R and one of the authority types from FMG went off to inspect a proposed alternative access route to RV2, to try to get around the BHP blocking. I suspect it was probably the White Springs track they were looking at. Anyway, R reported back to the BB. It was no go, I thought he said.

John had to pick up a couple of subbies from the afternoon plane, so he was late back to tea.