On the way out, we stopped at Repco, by the highway, to buy fuses. John hoped he would then be able to fix the CB radio, which had not worked since we were at Adels.

Travelled back down the Stuart Highway, then took the Batchelor road.

Stopped at the Batchelor Store and PO. I posted off the remaining books I’d had on loan from the Mt Isa library. Made ourselves known to the lady there, telling her that we would be getting mail c/o her Post Office. Although we would we working some 75kms away, this was the nearest PO.

I checked out the range of supplies in the store. Although “keep” was supposed to be part of our working terms, it did not hurt to know what I could get here.

I bought some post cards and a rather lovely small set of wind chimes – stained glass, featuring a green frog. I have a weakness for frog “things”.

I packed a sandwich lunch this morning and we stopped to eat this at the Magnetic Termite Mounds display area, in the Litchfield National Park. We did not spend time exploring or walking around these, thinking we would be exploring the Park on our days off.

The Litchfield Road was quite winding in parts. There was a fairly steep climb up the Tabletop Range, and a corresponding descent on the other side. These gave some distant vistas over bushland.

Occasionally there were interesting rock outcrops near the road.

We traversed a number of shallow floodways across the road, some of which still had water in. There were some larger floodways where there was quite a bit of water and swampy areas beside the road.

It was an interesting drive, on yet another hot and humid day, but with blue sky.

I had been to Litchfield once before, on the 1991 school trip, but it was really only a drive through on the way back to Darwin from Kakadu. I recollected looking at Buley Rockholes and Wangi Falls, but finding that the camp area there was full. We ended up camping just west of the Park, in a private campground, which was really just bush and was not a favourite memory! John had not been here before.

Called in at Wangi Falls, one of several superb sets of falls in the Litchfield National Park, and a draw card for just about every tourist that visits here. I wanted to see what it was like after the recent rain.

Walked from the parking area down the path to the large plunge pool. with the falls across its far side. After all the rain associated with the recent cyclone, the water was really thundering over the falls. 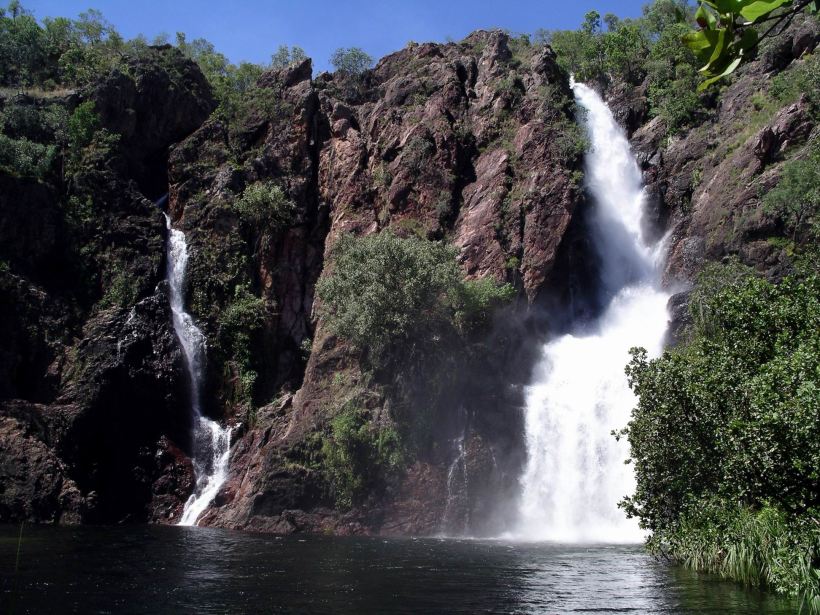 No swimming was allowed in the pool yet, due to the strong water currents, I thought, so I was able to get some really good photos, without lots of swimmers in the water.

Dry Season tourists just did not get to see the power and magnificence of such northern falls.

We found out, later, that a large saltie croc had been taken out of the plunge pool, last week, and that the pool would stay closed to swimmers until they were as certain as they could be, that there were no more crocs in there! 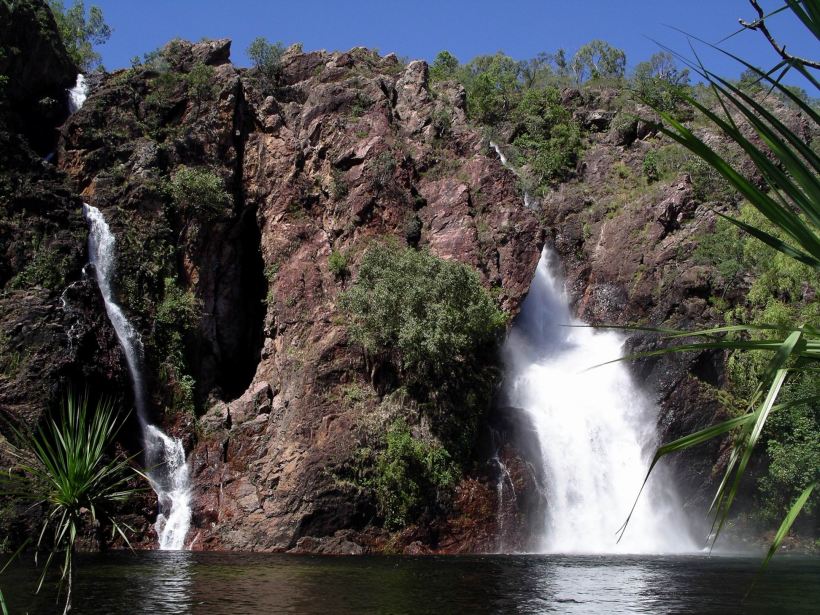 Continued on to the Monsoon Cafe, about 5kms beyond Wangi Falls. The land there was on the edge of the National Park – a private area, set aside for development. We arrived mid afternoon.

Parked the rig in the large, gravelled parking area, and walked up a path through a lush, lawned area, to the cafe. First impressions were really favourable. It was most attractive, with lots of hanging fern baskets edging a veranda area containing cafe tables. More tables were outside on the lawn, in the shade of large trees. 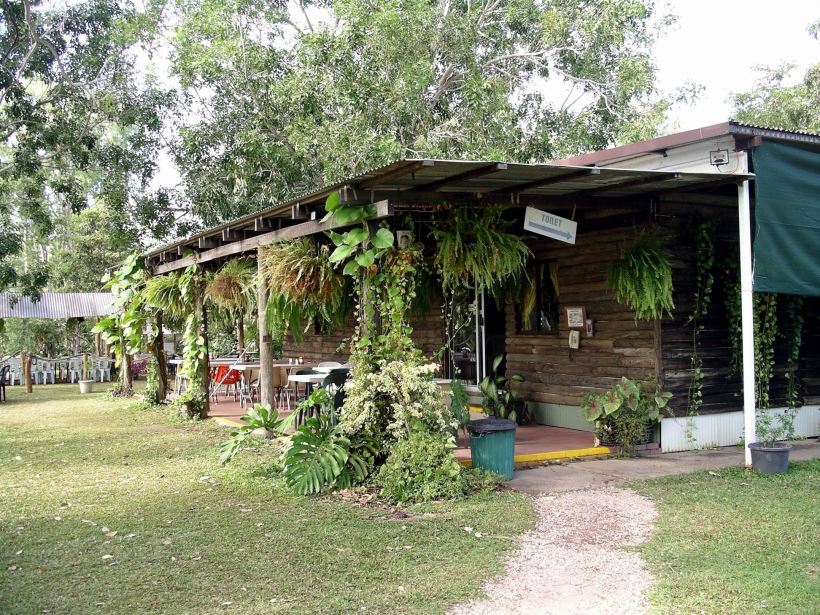 Inside, the cafe was quite quirky, with counter fronts faced with some sort of local split timber, and wooden poles supporting the roof. There were more tables in here.

We met the boss who hired us and his partner, B, in the cafe. They were very friendly. They told us we could set up our camp down by the creek, out beyond the cafe, so we drove the rig around and down. There was a flat area that he had made for some previous staff people, that he thought would be suitable  for the van – and it was. We would be side on to the creek, and from under our awning, would look out onto it and the bush beyond it.

The space between the creek and van

The small creek was flowing – lovely.

The area was pleasantly “bushy”.

We would have to use the same toilets that the public used, attached to the side of the cafe, and some distance from the camp. Closer, there were two staff showers – rather rustic bush style, rather reminiscent of those at Adels, but smaller.

When we were setting up camp, a little green frog hopped out of our floor matting bag and spent some time sitting on each of us. It was a cute little critter. We thought it must have gotten in there in Darwin, while the bag was lying on the ground under the van. I hoped it could find a suitable new home around here.

We did the usual set up for an extended stay.

If our friend did come to work, there would be space for her camp just beyond ours

After setting up, we went back up to the cafe, for a bit of an introductory session, in the bit of time that was left in the afternoon. Had a good look around.

There turned out to be two owner/managers. It was Boss 1 we met. His lady, B, did the admin type work, and marketing, and oversaw the outside area that was set aside for bus groups to have lunch. She served in the cafe, also. Boss 1 was responsible for the plant and its upkeep, and the physical development of the place, by and large. Boss 2 handled the financial side. At least, those were the arrangements we gleaned.

Both men had home bases in Darwin and alternated being on site out here – about half a week each. Boss 1 and B had an old donga, just up the slope from our camp, Boss 2 slept in an old caravan that was parked part way between the cafe and our camp. Both men also cooked in the cafe, though my presence was supposed to allow Boss 1 to do other work about the place.

I decided that the work would be alright, for me at least. John’s role was less clearly defined – just outside tasks, it seemed. I just hoped that we got enough hours up to make it worthwhile and also that our pay was correctly handled, in regards to tax and super.

Keep was supposed to be part of the package, but not much was said about that. Yet to be sorted!

We ate tea at our van, made from provisions I had in the van.

It was nicely quiet at night. Could not hear the establishment’s generator. Just the usual bush sounds. As we like it.