We woke early, after a fitful night’s sleep, to a very wet and dark grey dawn. It was still raining solidly, but the wind was less.

The ground in our parking area still seemed fairly firm. 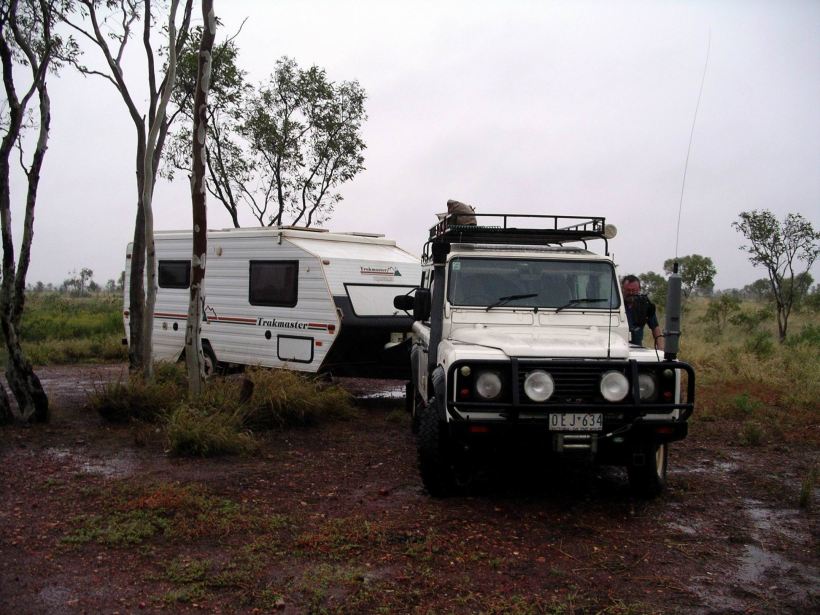 We took our time having a basic breakfast, hoping conditions would keep easing.

Stopped at the Wonarah Bore Rest Area for a quick coffee and look at what that area was like. 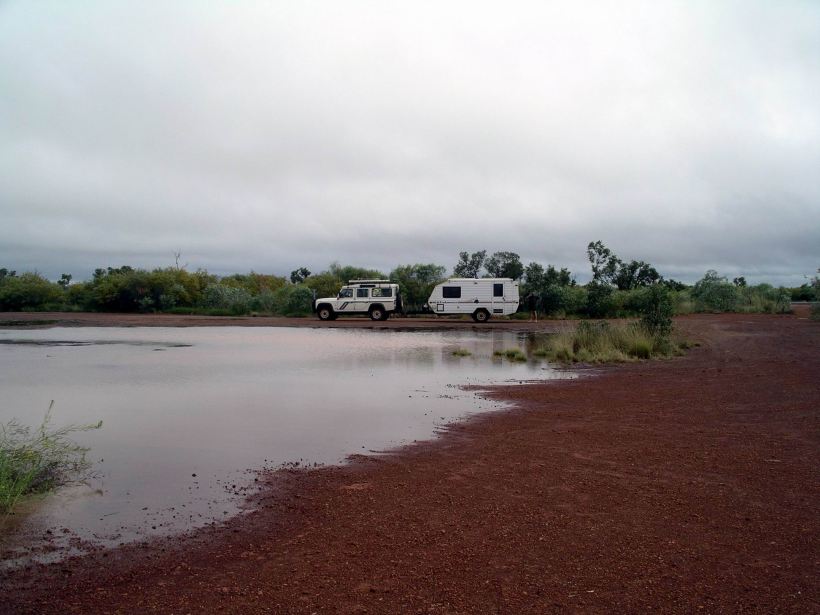 Called in at Barkly Homestead Roadhouse and topped up the fuel – at $1.81cpl. Ouch. We’d done 271kms from Camooweal by then. 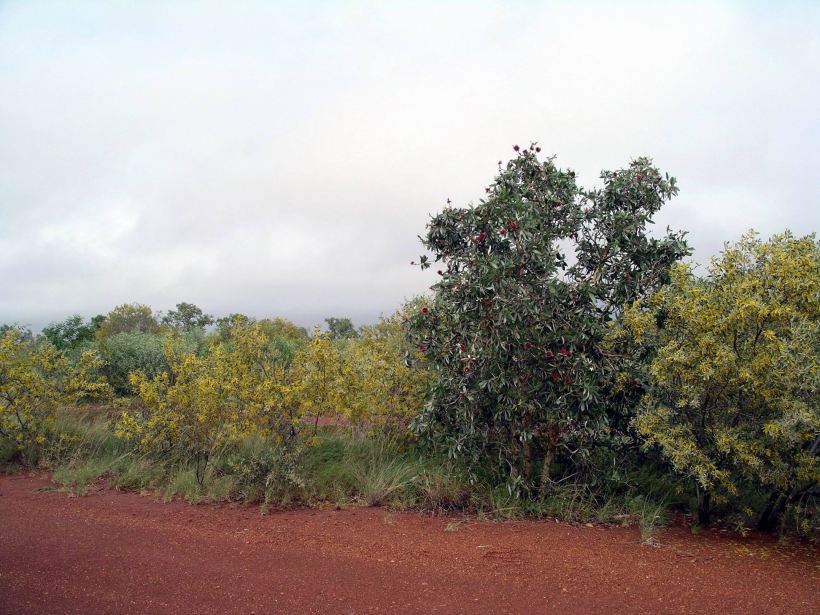 Barkly Highway bush – and some hints of blue sky!

At Three Ways, the junction with the Stuart Highway, after another 195kms, topped up the fuel again at the roadhouse there where the fuel was a more reasonable $1.68cpl.

It was still raining at Three Ways, but began to ease off as we continued north.

There was lots of water lying about the road sides and there were flowing streams. It was actually really interesting to see the country like this, in contrast to what it had been like the other times we had driven this way.

North from Three Ways was a pretty section of country to drive, with lots of hills and ranges.

We stopped for lunch at Renner Springs Roadhouse. John bought a pie and an icy pole. I had a hamburger, which was probably not a good idea, but it was a generous one with everything. A bit greasy though. My preferred lunch  of a salad sandwich was not an option. The place smelled heavily of sewage, too!

Having been planning on staying for a few months at Adels Grove, and not being able to shop since then, we were not very well endowed with supplies, at the moment.

The bush still smelled great, wet. There were lots of birds about, due to the road side water and full swamp areas. 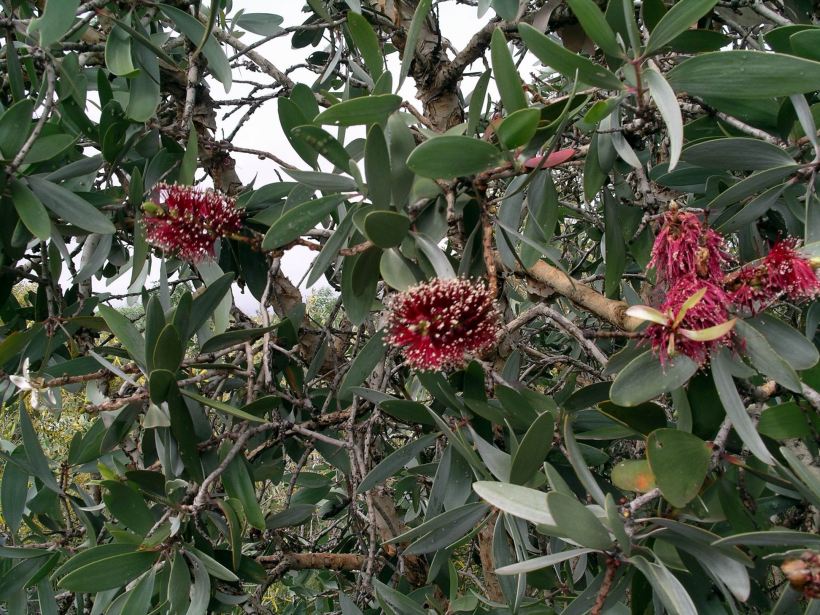 About Elliott, the rain petered out.

As we continued north, decided to stay the night at the famed Daly Waters Inn, which we had not visited before, but which is almost a grey nomad rite of passage. But it was not to be. We turned off the highway, only to find that the way to the township was blocked by a stream that was almost a metre deep and flowing very fast. There was not even a creek or river marked here, on our map. 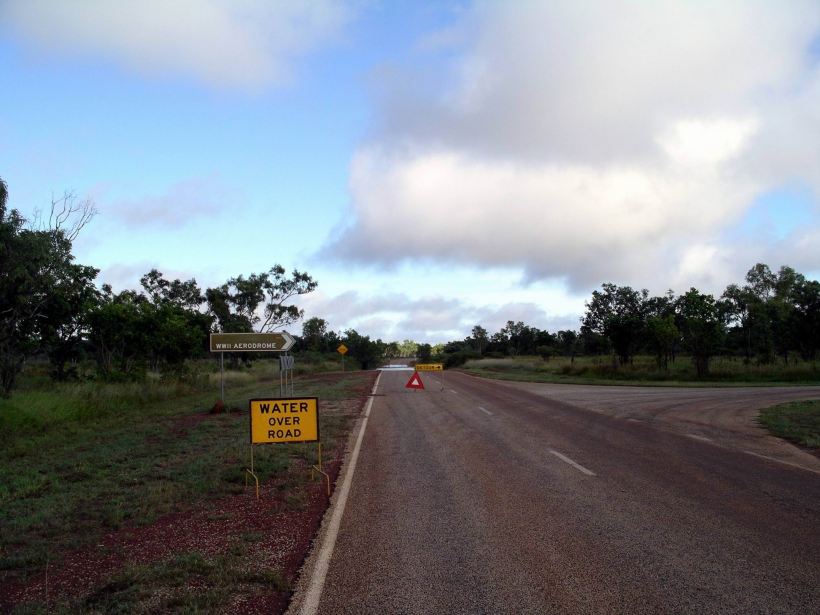 The signposted detour route was blocked by the same stream. There was a sort of side track over a very small bridge structure, but we were not sure it would take the weight of our rig, so played it safe and went back to the highway, to the Hiway Inn at the Roadhouse. 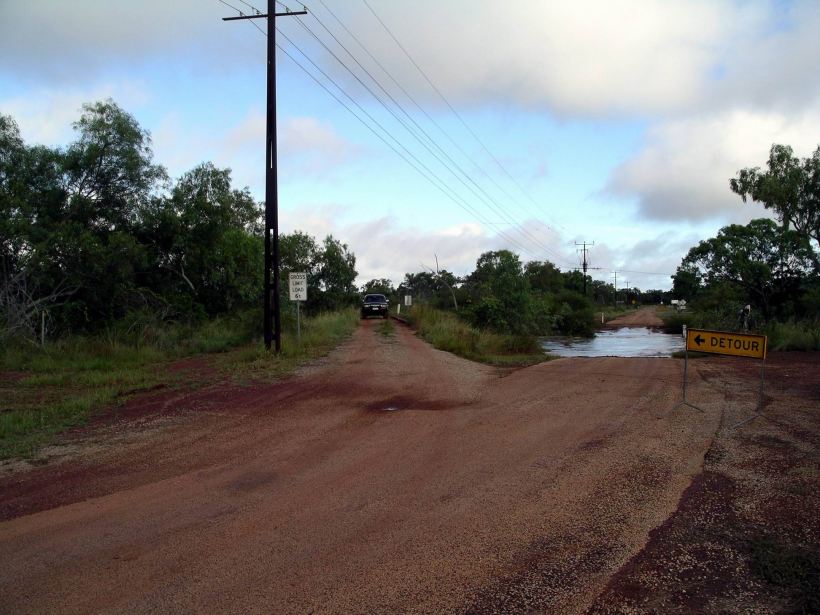 The camp ground was extremely soggy. We found a site on spongy, muddy, lawn, but it held the weight of the van. Further along, there was a full sized bus motorhome, bogged to its axles on the grass. Bet management was happy about that!

From the radio weather reports we picked up along the highway, we thought there had been several  inches of rain where we were last night. Guess it was yet another experience to add to the collection – spending the afternoon and night in the tail end of a cyclone – because that was what we had encountered. 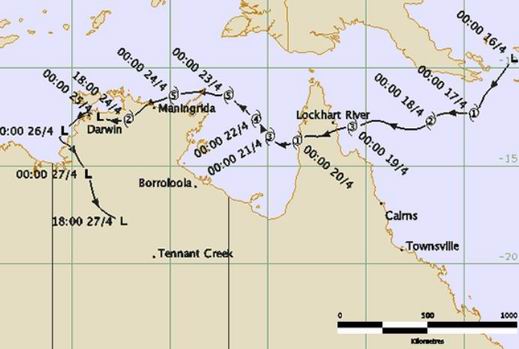 The path of Cyclone Monica (BOM)

Cyclone Monica had been a Category 5 cyclone when it came across northern Arnhem Land a few days before, but had quickly turned into a tropical low and turned to the south east inland, dumping lots of rain along the way.  Not having access to news or radio at Adels, we had known nothing of this when we decided to drive west – right into the path of the tropical low! 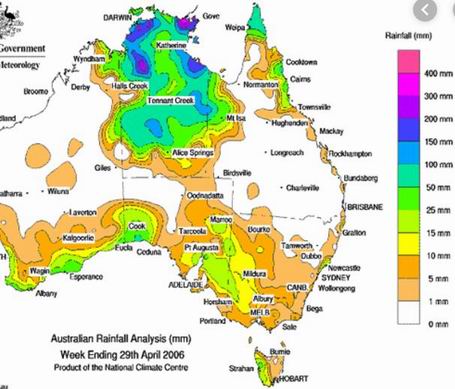 Phoned M to update her. She was in Moree for the night, having just spent a great time in the Warrumbungles.  She loved it there. Gave her details about the Clermont station teaching job, in case she was interested. She was about to head off to Carnarvon Gorge National Park for almost a week. She seemed a bit taken aback by our change of plans. Said she would check with Adels if there was work for her, before heading up that way, later. She said she would come to where we were, if there was work for her. We would suss that out when we got there.

It was a strange amenity block here. It was a transportable structure, but with louvered batwing doors on the showers – and not very big ones at that! They certainly did not give a sense of privacy! 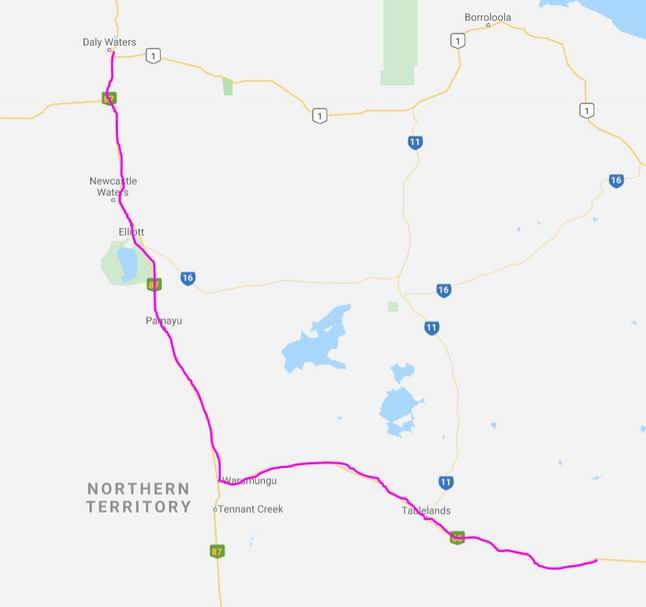