John declared that he wanted us to be ready to leave by 1pm. Fine by me, and I was all ready to go by then, but John’s packing went on and on……..The gear in the back of Truck and the boot of the van, his clothes, and such like.

He decided to take Truck to the local servo and fill it before the van went on the back. He also filled the jerry can we carry as reserve diesel – and which occupies a key position in back of Truck and affects the sequence of packing.

He couldn’t find one of our gas bottles. Finally worked out that he had left it over at son’s place, where we had earlier done some renovation work for them. Phone call ensued. Son’s wife brought it over.

We finally left at 3.30pm! There were fond farewells to the old cat who, once again, we were not sure we would see again. The poor house sitter had been waiting until we left, before she could get her car out to go down the street to buy provisions for her lunch!

After all the tension, at least we had a straight forward run to Bendigo. The usual way via Yea.

At daughter’s place, we backed the van down their side driveway, and stayed hitched up. This was the first time we had done this, rather than stay in a caravan park. Daughter wanted us to do this, so we would see a bit more of grandson.

Their drive had a distinct down slope, which would make it very hard to hitch van back on again, should we separate the two. The cost was that we slept on a lean!

Daughter and grandson – now three – had just gotten home, so they saw us arrive with the van. I thought that might help the youngster begin to understand what we did with the van, seeing it mobile.

We had an enjoyable couple of hours with the boy, before he went to bed. 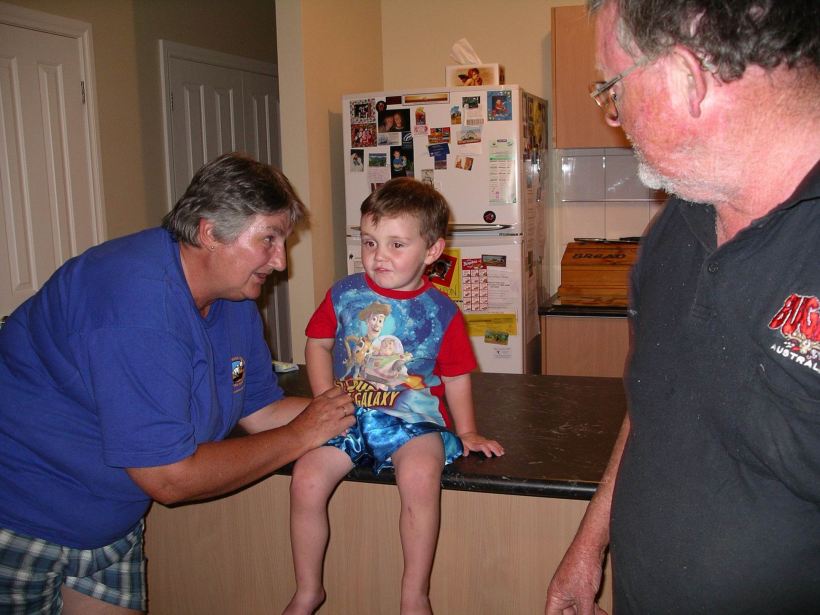 Over summer, daughter had requested that John make the boy a bed, in the shape of a Ford racing car. Both his mother and her partner have  Fords. John had duly made same – he had fun doing so. Earlier, the family had come down for a visit and brought S’s work van, and transported the new bed  back to Bendigo. She was to make and put the decals onto the bed that John had painted blue.

We had not seen the finished product. It looked very impressive. He is a clever man with wood. Grandson was obviously very happy with it.

After tea with the family, we retired to the van. They go to bed really early. Then John realized that he had forgotten his blue expanding file box, that had all his taxi licence documents and photocopies in. The same photocopies he had sent me off to get done and certified yesterday! Grrr…..

After some “discussion” it was decided that we would contact friend M and get her to call in and collect it – she was planning on meeting up with us, at Adels, to work there too.