Today, O planned to start on the cleaning up of his track to the coast – in reality, the 75-80kms to the lower, tidal section of the Calvert, rather than to the actual shore of the Gulf.  However, he thought – from what he’d seen by flying over the area – he might, this year,  be able to forge a route from the lower river, over the tricky salt flat bogs, to the actual coast, but had not yet tried to get there by vehicle. Traversing such coastal salt flats needed to be undertaken with great caution. Such terrain could swallow vehicles totally.

O thought the ground would be dry enough, now, to begin to clear the ravages of the wet season, and cyclone, on his track north.

Over the previous dry seasons, O had surveyed the eventual route of his coast track in his light Jabiru plane. He had used GPS fixings to plot a possible route, then went out on quad bike and foot to determine the actual best route on the ground. He had then slashed and evened this to be suitable for the 4 wheel drive Troopy to be able to drive over.

This track gave visitor access to the fishing of the tidal reach of the river, as well as seeing some great scenery.

O was taking one of the tractors, with a blade on, so he could push aside trees that had fallen over the track. Cyclone Harvey, in early February, came right over Pungalina. The winds got to over 100kmh and 6 cm of rain fell in a short time. This might not sound like all that much, but runoff was enough to raise the level of the river by metres.

Trees around these parts get weakened by termites too, so it often does not take much to make them fall. Thus there was a lot of debris to be cleared off the track. 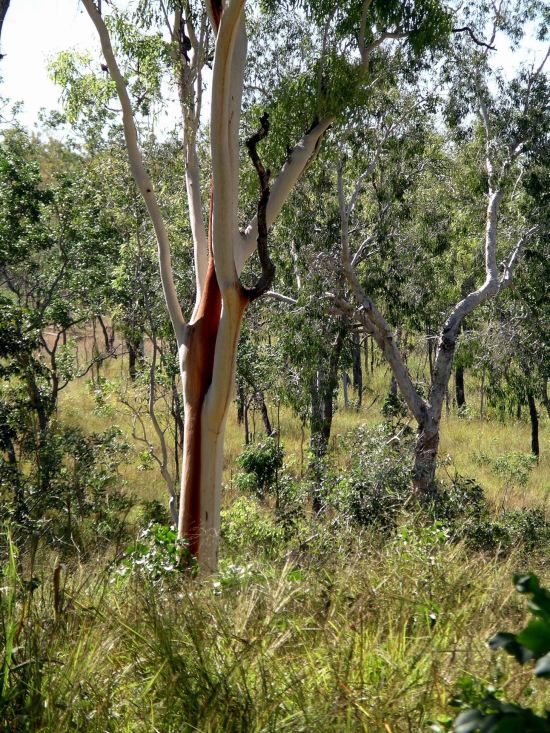 Unusually marked tree along the route to the coast

We were asked to take the Troopy, follow the tractor tracks and pick up O at about 4pm, from whatever point he’d reached, and bring him back to the house. He estimated that, even leaving at dawn,  he would not even get half of the distance and wanted to leave the tractor there so he could continue the work from that point.

We had a little sleep in, and left our camp about 10am, to go collect the Troopy from the house, then set off. Initially, the way took us on a familiar route, north past the Fig Tree and Bluff Water Hole turn offs. From there it was new ground for us.

After that, we were trying to follow thin tractor tracks through high, drying grass. We needed to travel slowly, because the ground was rough and we often couldn’t see rocks and ruts in the ground until we were onto them.

Following the path of the tractor

As we progressed further, tracking O became harder and harder.

We came to one place where the tractor traces entered a small creek, but we could see no exit signs straight across the other side. We hunted, on foot, for a while, and eventually found that he’d gone down the creek bed itself for some distance, before driving out on the other side. 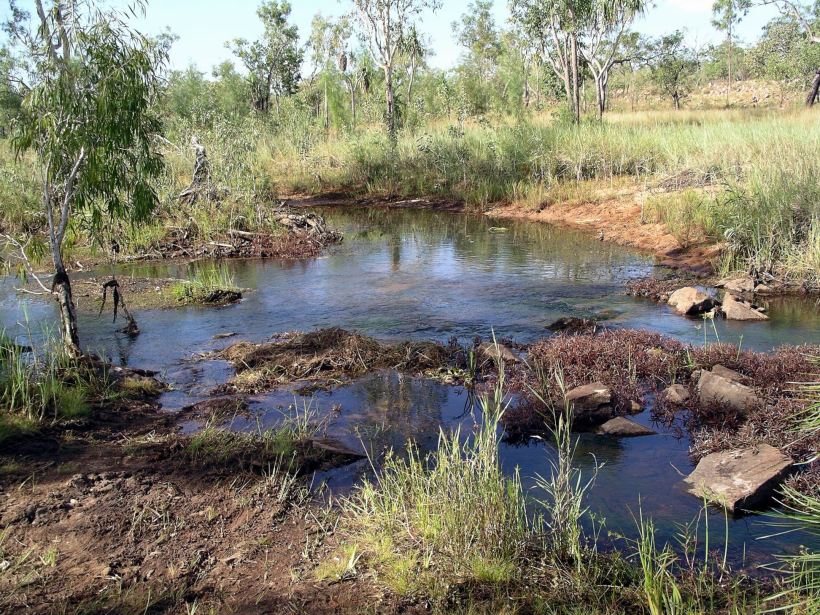 Tracks go in, but then where?

We eventually caught up with O, a bit beyond a beautiful lagoon, at 4pm. Great timing, right as instructed. We did not tell him that this was rather accidental, as we’d thought we’d have caught him a lot earlier. We had considerably underestimated how slow the going would be.

The beautiful lagoon had been named Mystery Shovel Water Hole, by O. When he was initially surveying the track route, he’d found an old shovel there. No idea of how or why it had gotten there, except that it definitely was not recent. It was a really lovely spot, on a tributary creek of the Calvert.

O drove the Troopy – and us – back to the house, at a faster pace than we had made! But it was still dark by the time we got there. We collected Truck and went back to camp, for a fast meal and early night. The physical effort of bracing over the rough track and the concentration of trying to follow the way, had been really tiring. But it had been a really interesting day. Exploring Pungalina was quite fascinating.