The days seemed to be getting clearer – more blue sky, less cloud.

Yesterday, O had set up the pride and glory of the kitchen tent – the “used” commercial gas stove that A managed to acquire last year. Getting it into Pungalina must have been a saga. It was not light!

Anyway, it was now out of the container and in place. Two big gas bottles were set up outside the tent, with one hooked up to the stove, and one in reserve.

So I now had four good sized burners and a decent sized oven. Much better than trying to cook on a fire in a 44 gallon drum, which had been proposed in 2003!

I set about giving the stove a thorough clean – it obviously had not been done after last year’s use. I did the stove top components, then started on the oven.

I was on my knees, reaching into the dark depths of the oven, scrubbing away with a wet scourer. Became aware of a short hissing noise and vaguely thought that O had not connected the gas properly, or there was a leak. Was wondering how serious it might be, when the hiss came again and I had the horrible realization that leaking gas would make a constant noise, not an intermittent one. Just as this thought occurred, I thought I glimpsed movement deep in the oven, by my hand! I somehow managed a massive backwards leap, on all fours, screaming out to John – who was working outside – that there was a snake in the oven! 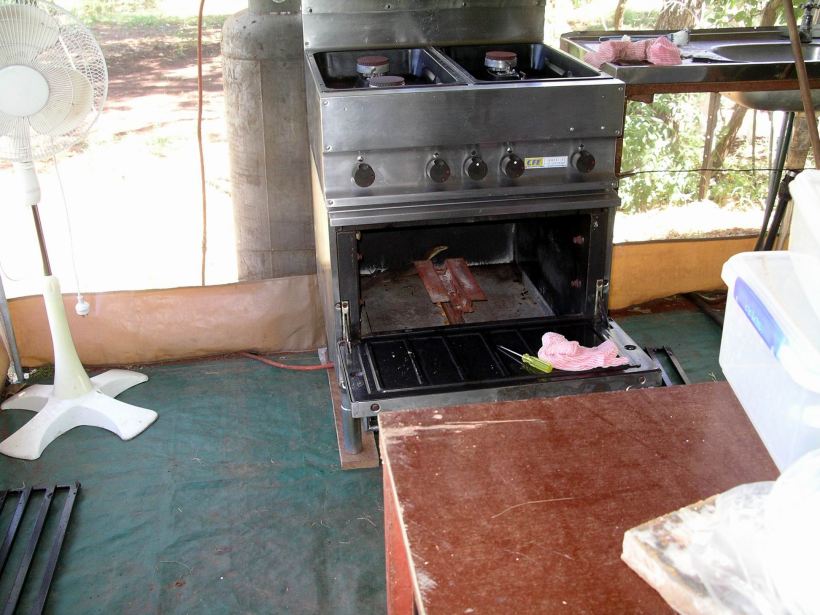 Before we could investigate further, I had to run up to the van and get the torch. I wanted to be able to see where it went!

We very carefully approached the stove and, by the torch light could see – a large water monitor! They are such curious creatures and get into every nook and cranny to check things out, it seems. While it was not particularly happy about its close encounter with my Scotchbrite, it was not inclined to move, so we left it there and I abandoned oven cleaning for the day. Good thing I hadn’t been using oven cleaning spray!

Water monitor checking out the oven

I made a note to myself: for the rest of the year, do not light oven until it has first been checked for visiting wild life!

After the initial flurry, both O and John were highly amused by the incident. I was sure I’d sprouted a few more grey hairs!