Today was more of the same.

John up to the house after breakfast, to water the vegie garden. Me doing my clothes washing in my washing dish, having soaked it overnight. We were certainly getting our clothes filthy! 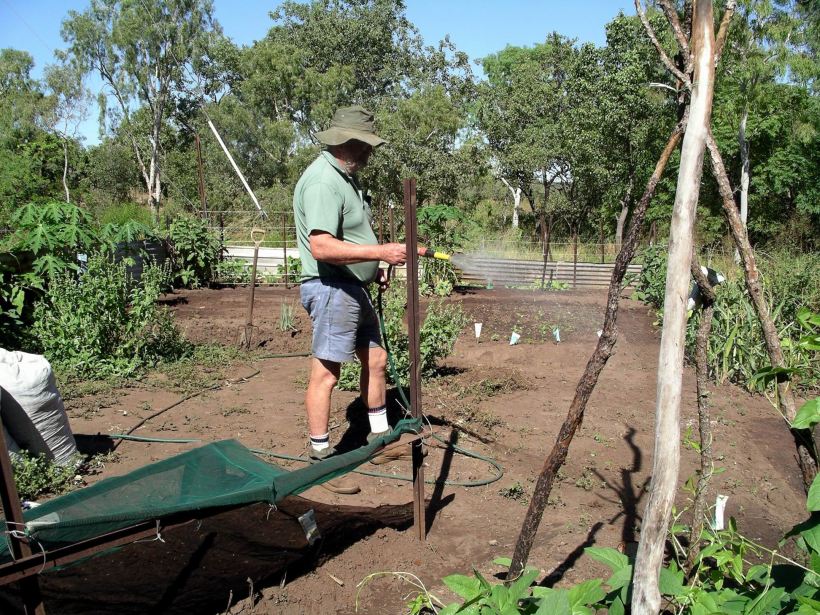 I went up to the house and started the process of washing the camp bedding and linen to freshen it up. O had a proper domestic washing machine, set up on the cement verandah floor at the front of his house. The old fashioned clothes lines were wires stretched between poles and trees and held up with wooden props. I grew up with such a system so that didn’t faze me. At least, the washing dried quickly.

Maybe one day I would get up nerve to ask O if I could do our personal washing in his machine! Should be part of “keep” as far as I was concerned!

Then it was camp lawn watering for John and general neatening work and helping O.

Getting the electrical wires and leads set up all around the camp was a huge job for O. As well as the 12V leads to the individual tents, there were leads to light the kitchen, dining tent, fire pit area at night. There were a couple of 240V power points in the kitchen tent, so leads to those too.

All these electricals were, of course, powered from the camp generator. This was not to be run when there were no guests, so no lights or power then.

A lot of the gear that came from the container needed cleaning. Whatever backpackers O had helping him put it all away, last year, did not clean things very well, before packing away!

Now that his friends had gone, O was spending more time in the late day with us, and having some evening meals with us too.

O was telling us that, by law, the local Shire Council is obligated to provide and maintain access tracks/ roads to homesteads. In this case, the 64kms long track! They did clear it, to some extent, back when O moved in. However, O’s first partner/owner of the place, until 2004, “sold” this obligation back to the Shire – for enough money to buy some of the machinery (second hand) needed to establish the place. O was still not happy about this!