It was the first day of spring. The morning was warm enough for us to go back to wearing shorts, which we hadn’t been in for days.

Through the day there was some fleecy cloud build up.

John had not set the alarm last night so we slept late. By the time we got up at 8.30am, the other campers that had been here, probably about six lots, had left.

Went to visit the Art Centre, which had been promoted in some of the literature we had. It had a very impressive gallery collection of a representative sample of the art from the Lands and its associated communities. It made for really interesting browsing.

We sifted through the unmounted canvas art works they had in a pile, for sale. Bought three acrylic on canvas works. All very different. One had an orange background, reminiscent of the desert sands, and showed shapes and patterns representing a water hole and people meeting there. A multi coloured one represented foods, with flowers and ants. A somewhat larger one of predominantly purple, pink and black tones had patterns of shapes – I really loved that one. All came with provenance about the artists. We parted with $480 – very reasonable prices, we thought.

One of our new art works

Had a very interesting talk with the lady running the Art Centre. She was quite adamant that the people had to be organized by whites, or nothing was achieved. She said that the local CDEP scheme was being made into a “must work for 20 hours a week” rule. Otherwise, no benefit would be paid. She was rather sceptical that this would work – said it would mean that even more of the teenage girls would get pregnant, to get benefit money that way.

But she felt that there were some positive aspects in the area – the people still had much “culture” and connection to the land. But they steal. Her view was that, despite all the car wrecks, indigines never die by the road, even though they do not go out equipped for remote travel. But four white fellows had died – she did not say over what time span that was.

We noticed that the fuel bowsers at the roadhouse were inside really heavy steel cages. No self serve around there!

There were notices on the roadhouse doors – “No Kimbie, no enter”. i.e. no little kids with bare bottoms were allowed in. The circumstances that made such a notice necessary did not need  much thinking about!

Today was a much more leisurely day and thus very enjoyable. I think that even John had concluded that yesterday was too much!

We were able to doodle along, actually stop to take photos and to have some walks around.

John emptied the jerry can into the fuel tank.

The road was more corrugated.

Ate our packed lunch beside the road, and walked around, looking at plants and the scenery in general.

I tried to take a photo that would be suitable to enlarge for our wall at home – of Truck, van and the “desert”. Actually, said desert continued to have lush growth and lots of flowers! 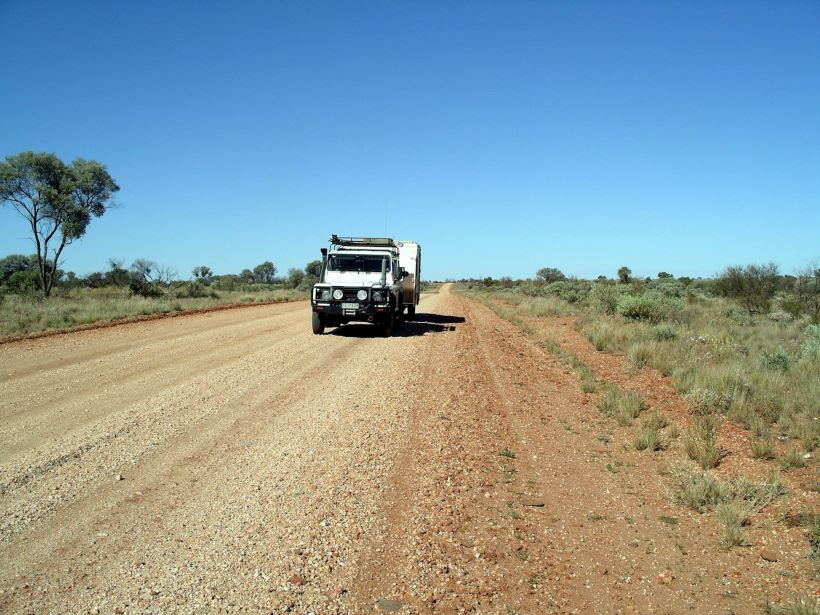 Then, we came up over a low ridge and there in the distance was the Rawlinson Range. The country had changed from the dune type arid lands to a much more classic Central Australian appearance. It was wonderful.

The ranges made the last section, coming into Warakurna, delightful.

Refuelled at Warakurna Roadhouse – $1.50cpl. Filled the jerry can too.

We set up in the roadhouse camp ground – $16 for the night. The campground was alright.

This afternoon and evening was much better. We were able to relax before tea and I could take my time cooking it.

Travelling corrugated roads had become very tiring and we had an early night to bed.