The day was very windy.

We drove out to the north west, to Quobba Station and the Blowholes. This entailed going back out the highway, to the north, for about 15kms, then taking the Point Quobba road for about another 60kms.

The drive was through rather monotonous country – quite bleak and arid looking. There were areas of very low plants, with bare ground between them, interspersed with large swampy, washout sections, mostly dry, that were arms of the land locked Lake McDonald.

Out at the Blowholes area, there were posted warnings about the dangers of king waves – sudden waves that came right up onto what looked like safe ground above the cliffs. These had drowned a number of people, over the years. So we were rather cautious about going too close to the cliff edges, particularly given the conditions.

Waves breaking onto the land

The Blowholes were supposed to be really spectacular, shooting water up from cracks in the cliffs, to considerable height.

Conditions today were causing huge waves to break on the cliffs, shooting plumes of spray really high into the air. Because of this, and our reluctance to go too close, it was hard to tell what spray came from breaking waves and what from the blowholes. Regardless, it was very spectacular – and noisy – illustrating the power of the ocean. 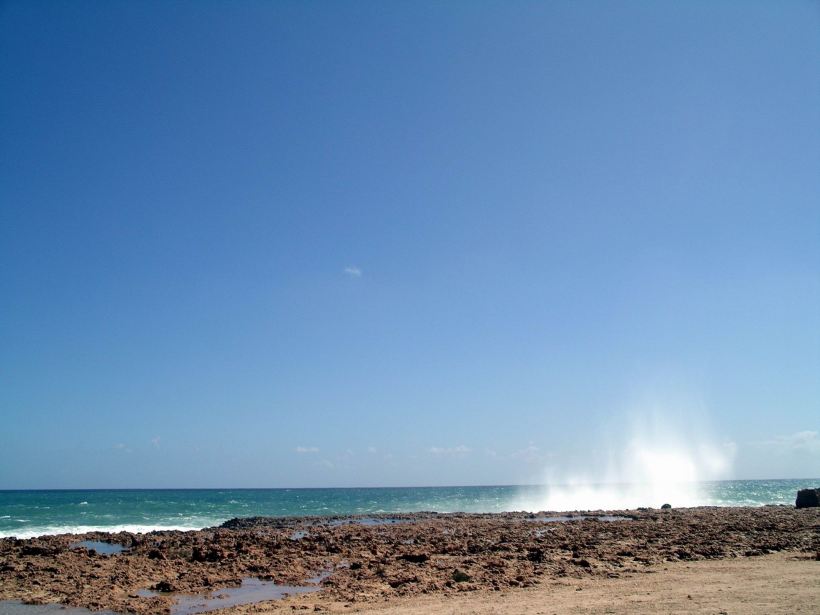 After we’d watched waves and blows for a while, drove a km south along the coast, to where there was a primitive camping area – more of a collection of rough shacks and camps, but with room for the casual camper. It would be alright for a future stay, though possibly rather dusty and exposed.

Quieter seas near the camping area

Continued north, along the coast, for a few more kms, to Quobba Homestead, to check that out for a future trip. One could camp at the homestead, which looked alright – more sheltered than back at the Blowholes. Or there was camping 50kms further north, on the station, at Red Bluff. That seemed really interesting, too. But neither of these options was cheap – camping at Quobba was $18 a night.

After that, we turned back to Carnarvon.

It was such a pleasure to get out and about, after all the sports watching.

Later, in the evening, the batteries were really low, so I had to turn the fridge off altogether for the rest of the night. John had not had the charger on as much as he should have, because it interfered with the TV picture quality! I was not happy!