We managed quite an early start to the day’s sight seeing ventures.

Drove the couple of kms to the actual “marble bar” at the nearby Coongan River, that gave the town its name. The reef of rock is actually jasper, not marble, but – especially when damp –  it looked enough like the real thing to trick the first settlers.

The “marble” bar and Coongan River

We put some water on it to show M how it does look like marble.

People trying to souvenir a chunk of jasper at the main part of the bar, had become a problem, so a little quarry area had been created, slightly out of the way, where those so inclined could pick up a piece of jasper, with vandalizing the main reef.

It was a pleasant spot out there, by a big pool in the river, and we had a bit of a wander around.

It would appear that there were fish in the river…

Then drove on a little way further south, to the old Comet gold mine. This started with a gold find in 1936 and was worked until the 1950’s. Its claim to fame was that it had, for some years,  the tallest chimney in the southern hemisphere, at 75 metres. It was still producing little bits of gold to sell to people like me!

The township of Marble Bar grew up as the result of a gold rush in the 1890’s. In that period of optimism, some substantial buildings were put up. However, the main rush was fairly short lived, as news of the great finds around places like Kalgoorlie, filtered north. But some mining activity continued, in fits and starts, around Marble Bar. The Comet Mine had been one such occurrence.

I bought a chunk of gold nugget. I planned, when back home, to have a setting put on the top, so I could wear it on a chain, as a pendant. Also bought a tiger eye iron necklace. My excuse was that these would be this year’s birthday and Xmas presents!

We went back to the van for lunch. Then it was out the Salgash Road, for about 36kms, to the old Corunna Downs WW2 airstrip and base.

Back in ’93, when we were rained in at Marble Bar, the park owner had given us directions out here and we had been captivated by the place and its little-known history – which he had told us, as there was then no tourist information available.

The drive out to Corunna Downs was lovely – dramatic scenery. 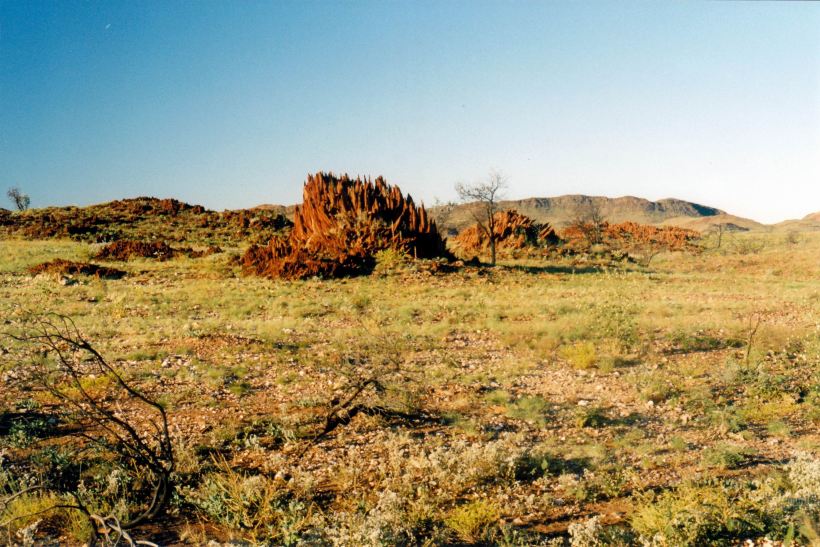 The air base here was built in 1942, in great secrecy – for long range B24 Liberator bombers – American – that would attack Japanese bases in the Dutch East Indies, and shipping in that region. At the time, the air bases further north – around Darwin and at Truscott in the Kimberley – were being attacked by Japanese planes. The surrounding area here was so hilly, remote and inhospitable, that it was thought the Japanese would not suspect a base was here. It was also beyond the range of most of their aircraft.

The base operated until 1945 and was decommissioned in 1946. It was never attacked. Although the Japanese hunted for the base of the big bombers, they never found it.

The remnants had survived remarkably well, though the few actual buildings that existed, were removed. The Australian and American servicemen were housed in tents, camouflaged, which must have been distinctly uncomfortable in the hot Pilbara summer.

The longest of the two runways was about 2100 metres long and 50 metres wide; a slightly shorter runway intersected it, and there were kms of taxi ways.

We could still see the remains of the old runways and some of the twenty earth bunkers that sheltered – and helped camouflage – the big bombers. There were lots of bits of metal, old drums and the like, lying around.

Truck in revetment that once sheltered a big bomber

Of course, we had to drive some of the long runway, at speed! We did quite a bit of walking around and exploring on foot. 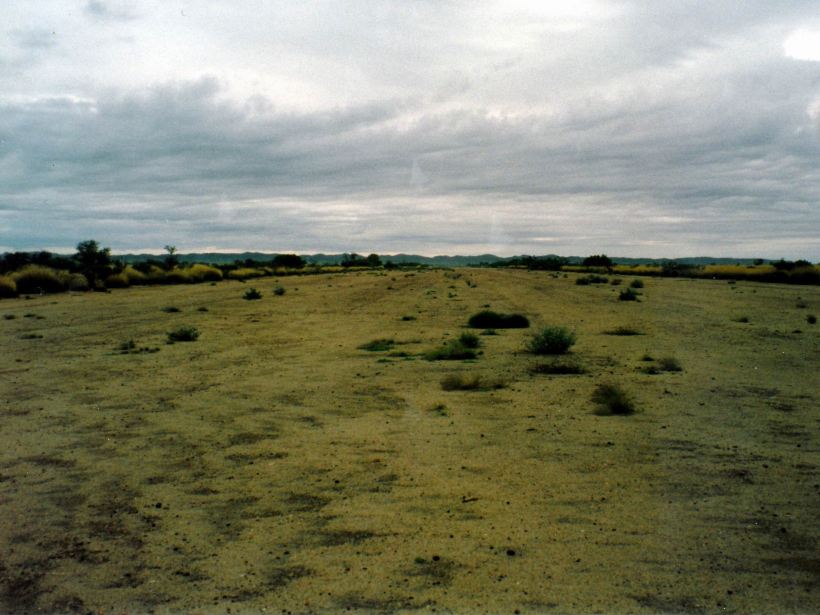 It was a very good afternoon. Something different for our tourist friend and something well off the beaten tourist track. We saw no other travellers at all, through the afternoon.

Some of the travellers  we talked to, back at the caravan park, said that Carrawine Gorge, east of here, which we had considered visiting, was not worth the trip, because it was really badly degraded after this year’s cyclone. Scratch that idea, then!