No rain through the night – good!

The ground was drying out well. But the track in was still very muddy, and most camp sites were still slippery.

The conditions of our stay would allow us one drive out and back, today, so we decided to visit the Chichester section of the National Park.

We carefully replaced the barrier chain across the track, as we left.

The first 35kms were retracing our route in, back as far as the rail road.

It was a relief to see that the heavy rains had not brought the river up over the causeway.

Then there was a 10km section of road through the range. This was sealed, but one vehicle width only and very winding and steep. Could see why it was stated to be unsuitable for caravans, though a small one like ours could manoeuvre through – but meeting any oncoming traffic would pose problems.

There were some great panoramas opened up as we wound our way through the range.

From the Mt Herbert carpark, we did the short walk up the mountain. 600 metres each way and the gradient was fairly easy. There were good views to distant peaks and over the ranges.

Then we walked the 4.8km return walk to McKenzie Springs. It was most enjoyable.

The day was quite warm and fine, now.

There were lots of birds around the springs. This was once a watering hole for camel and bullock trains. The springs and the little creek fed from them, which further down contained the Python Pool, were really pretty.

We must have been into the early part of the wildflower season in these parts, with a number of different plants in flower.

We saw some spotted firetails – a new bird!

Mt Herbert from Springs track. Truck is a tiny speck in the carpark!

After some time exploring up and down the creek at the Springs, we returned the same way to Truck, then drove further around the twisting road to Python Pool. From the carpark there, we walked about 100 metres to the actual pool, taking our packed lunches to eat there.

After the peace of McKenzie Springs, Python Pool was rather an assault on the senses. It was too crowded with people, being a place where children could swim. There were far too many noisy kids there!

After lunch, checked out the nearby camp area at Snake Creek – pretty ordinary. But it was, at least, open for camping, hence the hordes at Python Pool. 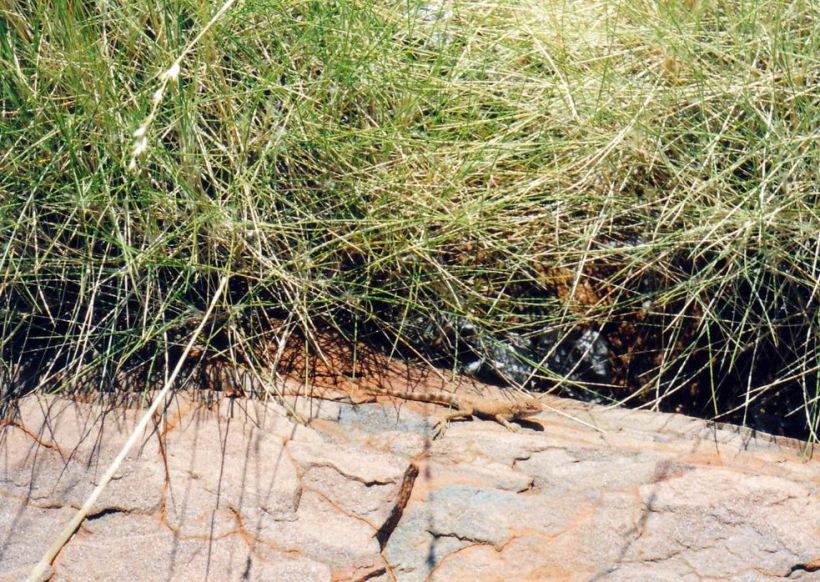 Reptile with striped tail, by the track

Retraced the route, back to our solitude at Deep Reach, peopled only by us and acrobatic corellas.

Deep Reach, near our camp

John topped up the fuel tanks with the diesel from the jerry cans on back of van.

Given the crowds at Python Pool, we concluded that it had been worth the rain, mud and temporary inconvenience that had given us this place to ourselves!