Again, it was a day for driving, including negotiating our way through Rockhampton.

We did not go into Gladstone.

At Miriam Vale, turned off the Bruce Highway and made our way to Agnes Waters and then the Town of Seventeen Seventy. I had long been fascinated by the name of this place, so had persuaded John that we had time, still, to take a brief tourist break on the way south. We did a trade-off, because he wanted to go via Brisbane, so that he could visit a shop that sold the gauges for weather stations – good quality ones.

The Town of Seventeen Seventy is at the location where Captain Cook made his second landing in Australia – after the one at Botany Bay (now Sydney). The village here had a different name, until 1970, when it was officially changed as part of the two hundred year commemoration of Cook’s voyage.

We booked into the Captain Cook Holiday Village – I guessed the name was inevitable! Cost $17 a night. The park was quite a “bushy” one – leaf litter underfoot, trees overhead, and a bush turkey busy building his mound nearby. 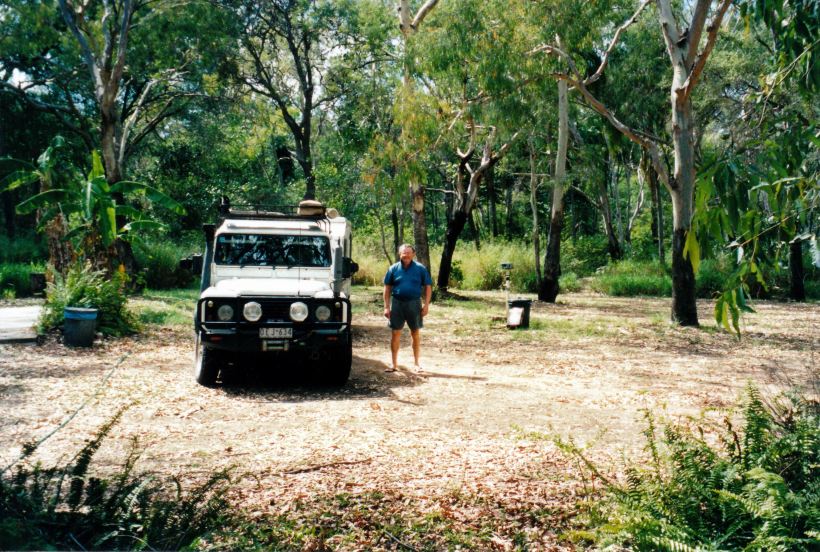 Our site in the bush land of the caravan park

After set up, we drove off to explore the township – just a village really. We discovered there was a less formal camping area further towards the Point, and by the water’s edge. But we were happy enough where we were – less crowded, anyway.

We found there was available a day tour on an amphibious landing craft – the LARC – along the coast to the Bustard Head Lighthouse, to the NW. It seemed the tour had won a number of awards – it was certainly “different” – so we decided to treat ourselves, and booked for the next day. It cost us $95 each, which was not cheap. We had to turn up in time for a 9am departure.

After that costly impulse decision, it was back to camp and a lazy rest of the afternoon.