John was still trying to work things out in his mind.

I persuaded him into some physical activity – and we went for a walk along a track by the side of the Nicholson River waterhole that the camp was by. The long, deep waterhole eventually began to narrow – in an area they called The Gorge, where the banks became rocky, and we walked that far. It was a pretty walk, and the exercise was good for both of us – walking freely had become yet another rare luxury!

Walk track from camp to the Nicholson River 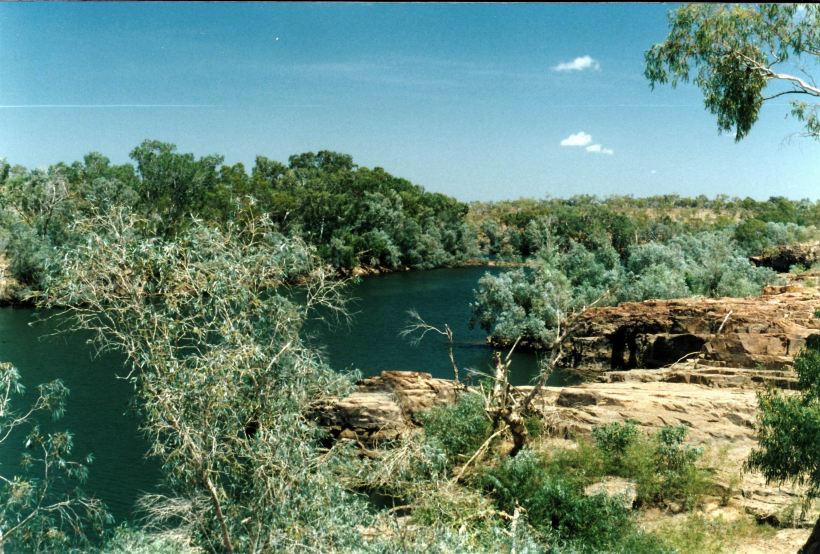 Walking by a dry side channel of the river

The decision was finally made. We would not go back to Doomadgee today – and probably not at all. John would phone the DP from the telephone box up at the caretakers’ place, and tell her we would not be at school, on Monday.

I went up and paid for another night in camp.

I think we both felt somewhat “lighter” at the thought that this particular interlude was probably over.

Something I had not recorded earlier was that, a couple of weeks into our time at Doomadgee, we had been phoned by one of the Adels Grove staff, to let us know that the boss had gone into labour, early. The Flying Doctor had taken her to Mt Isa, and then on to Townsville, where her son was born. He was premature and small, so the bosses had stayed in Townsville with him. The trusty staff had carried on with running things at Adels – they were lucky to have such people working there for them.

Although we’d had unique experiences at Doomadgee, and earned good money for a few weeks, I still wished we had stayed at Adels. Probably, John was privately wishing the same thing!