Our time at Doomadgee

The 16th was Reporting Day. The students’ progress reports were given orally to those parents who could be bothered coming to the school to get them. Nothing went home in print here. The reporting process did not affect us, as we had not yet taught.

By the end of the week, I had the same bug that John had last weekend, and had Friday home in bed, anyway. Temperature, shivers. cough, headache, sore throat. With his prior example I did not bother trying to get medications from the Hospital, but used what was left of what he’d had.

We had been told that everyone who came new to town, got sick, and that we should, when better, arrange to get Hepatitis B shots. Very Third World…..

I was already making a list of things to buy in Mt Isa or Townsville, in the next school holidays. Panadol – lots of it. Chicken noodle soup packets – for some reason this was not stocked in the store. Lots of chicken, meat and fish – even if I had to buy dry ice to transport it back.

We spent a lot of time in the evenings, and over the weekend, trying to work out teaching programs. I decided to do the simple cooking things with the boys. The girls doing the VET course would do some cooking too, mixed in with their theory sessions, and to illustrate the basic points of those, like food handling hygiene! I would start the Mothercraft with pregnancy care, maybe with the signs of pregnancy. The store did not stock testing kits! I was sure, though, that these girls had friends who were not attending school, who were already mothers, so they would not be ignorant about it all.

On Sunday, we did some exploring around the area. I was feeling up to this by then, and willing to grab any chance to get out of the community.

John had gained permission from one of the elders to drive out to the site of the Old Doomadgee mission, on the Gulf coast, near Bayly Point. We knew that the local people went out there regularly, fishing and hunting for turtles, at the coast. It was about 100kms away.

We set out on the road from Doomadgee, to the north, but turned back before we got near the coast, because there were starting to be lots of side tracks and we had no idea of the right way to go. There were no signposts, of course – the locals know the tracks, and tourists are not permitted to travel the local roads. The road was surprisingly good, though – regularly graded, it was clear. The country was just the same old flat savannah scrubland.

Back in town, we drove out to look at the weir on the Nicholson River, and the ford. The river was really attractive here – although it would contain crocodiles.

This week saw us commence taking classes. My first cooking session with the secondary boys went better than I expected. It was unusual to be teaching with another teaching watching on, though. I presumed that the SM thought he was needed to keep the boys under control, but it may have been a cultural thing, to have the male presence. Then again, the SM may just not have wanted to give him free time!

I did not appreciate having to do the shopping for the classes. It was a real hassle, and hot, walking to the store and back, carrying the shopping. The office lady made me feel I was imposing on her, needing to do the Requisition Form.

I encountered some unexpected issues in my first lessons. I’d assumed the students would have a basic knowledge of measurement – hadn’t even really thought about it. Not so – no concept of fractions like half a measuring cup! So we had to do some learning, with measure cups and water, at the sinks.

Another concept was time. We had a morning session and I asked – if we wanted the food for big lunch, at 1.30pm – and it took 40 minutes to cook, what time did it need to go in the oven? 10 o’clock, missus? 8 o’clock, missus? All answers wildly out. These were kids aged 14+. What hope would they have in the normal, outside world? What on earth had teachers been doing with them for 8 or 9 years?

I sat in on the meeting led by the DP, with the teachers, to plan their main teaching unit, or theme, for the term – nearly three weeks into same! This is something I would have thought should have been done last term, in preparation, but who was I to know? S decided to do a newspaper theme with the secondary girls, and produce one at the end of term. With no newspapers available in the community, rather an abstract idea, to my way of thinking.

John and I talked about what came next, as we began to settle in. We decided we’d take the van out, in the September school holidays, and try to arrange storage for it and Truck – maybe at the Ringrose Transport yards, in Mt Isa. We would fly back to Doomadgee. Then, at the end of Term 4 – on 6th December – we would be able to fly to Mt Isa on the daily plane, collect the van, and head south for Xmas. If we did not get it out in September, early wet season rains could close the Nicholson River ford and we would not be able to get the rig out. We did not want it stuck in Doomadgee, with the risk of floods and cyclones either.

Approach to the Nicholson River ford – flooded in the Wet Season

The Principal already seemed to be trying to get John to think about taking over as Principal when he finished his two year stint here, at the end of the year! He definitely wanted me to take over the SM’s job! But I thought we were too inexperienced in local ways, not to mention those of Qld Education, to do so.

The SM did seem to have one role he did well, and which I could not do – yelling at the older boys when they misbehaved. He seemed to be able to intimidate them into some form of obedience, just by bulk and loudness.

John liked the respectable wages we received here. He was talking already about perhaps returning in 2003 – or applying to work up on Cape York! I had my reservations about all this.

John had talked with the man who ran the Council workshop about how to get a tyre to replace the one we’d ruined on the drive up here. He phoned and ordered one from a tyre place in Mt Isa, to be brought up on the next Ringrose transport truck. The workshop man would help John fit it. This was going to be an expensive new tyre! Because the spare from the caravan was interchangeable with the Truck, we could use that as a spare, so we could still go places while waiting for the new one.

John started a vegetable garden in the back yard. He used the spade we carry, to dig some beds, and had brought some packets of seed with him from Adels Grove. 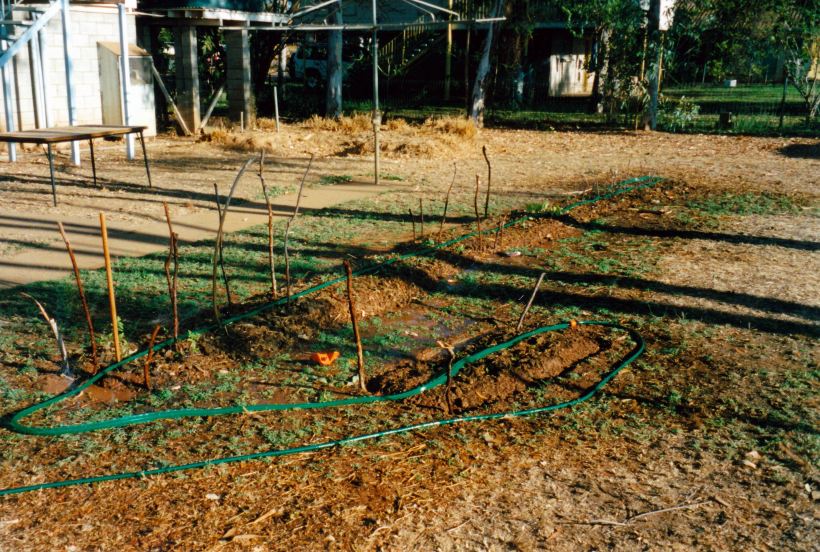 I was finding the interruptions to our sleep, every night, quite wearing. On top of the party house across the road, and the dog packs fighting amongst themselves and chasing the mob of horses around the streets, there was the noise associated with the emergency night time visits of the Flying Doctor, to evacuate someone to Mt Isa. The plane would come low overhead and depart the same way. There would be a number of cars escorting the unfortunate patient, screeching round the corner in front of our bedroom window, then returning after the plane left. We needed to get out of the place, just to get a couple of solid nights of sleep!