After breakfast, walked up to the shop/office, where we had a kind of interview with the manager – M – who was also one of the owners of Adels Grove.

If we wanted the work, I would be assisting the cook – despite my total lack of any formal qualifications in that area! This was not what I had envisaged. I was to find out later that the cook was even less qualified by general experience than I!

John would be doing general “men’s work” around the establishment – cleaning, tidying, wood chopping, boiler lighting and the like.

We would be paid $300, clear, a week, each, get all meals, and be provided with a place to park the van in the staff area down the hill in the treed area closer to the creek. On our walking, we’d seen a small cluster of caravans and campers down there, but not realized they were staff owned. We would be able to plug in to their power supply – our solar would not work  in the very shady area down there. It was generator power, of course, and turned off at night.

The compulsory superannuation levy would also be paid by them, so we had to fill out paperwork to join their super fund company. There was more paperwork for tax numbers and the like. Given all the paperwork, for just two weeks, we thought they must be desperate for staff!

So – we were officially employed again.

Should get to save some of our funds for the next couple of weeks – no site fees, no food to buy, no going anywhere to spend money.

Went back to the van, packed it up, and moved it down into the area they call the Grove. This was an area almost down at creek level, below the buildings and formal camp grounds which are up on a bank. It was once a main garden area for the Frenchman, irrigated from the creek. It is heavily treed – some of them trees he planted – and the shade means that there is little undergrowth. The dirt ground is covered by leaves. Because of the trees, there were lots of birds. 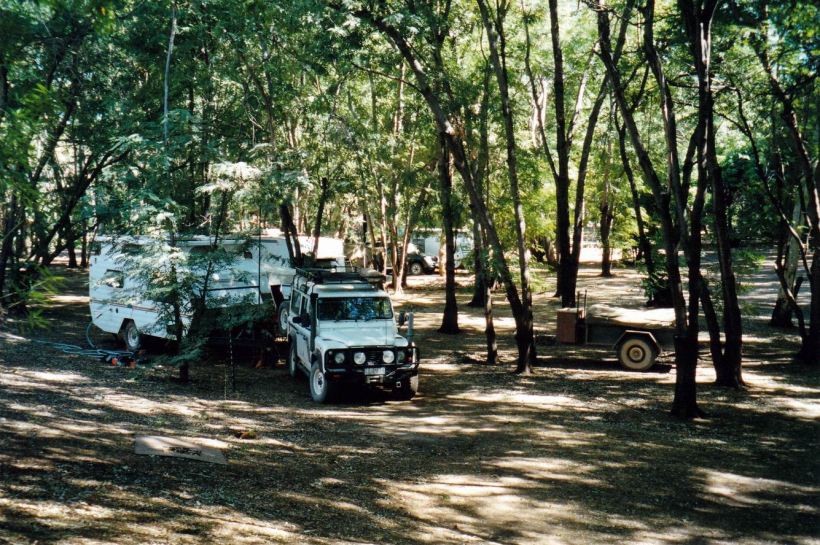 Our van set up in the staff section of the Grove

John ran the long power lead up the hill and into a shed there to plug it in, and connected the hose to a nearby tap. We decided we would be quite comfortable there.

There was a flush toilet and hot shower in a little shed just up the top of the hill from our camp – but these were for the use of M and husband R. (It was he who we’d seen at Site D the other day, being a guide). We used the campground toilets, or the long drop ones that served the tent guests. We used their showers as well – these were in a tin structure, but were very roomy and pleasant. 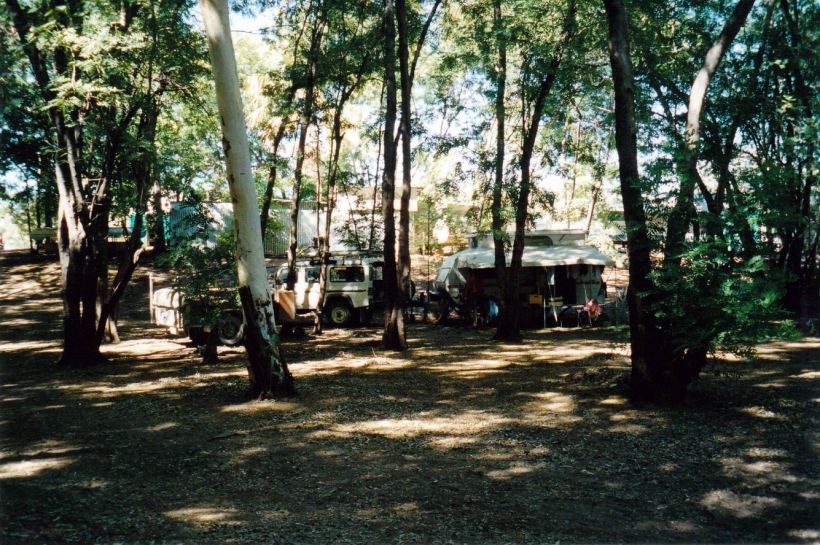 Our camp, seen from in the Grove. The old tin workshop was on the rise beyond us.

Then we started work – and worked the afternoon, and thereafter.

Towards the end of our two weeks there, nothing had been said about us finishing up. When I broached the subject, it was indicated that we could stay on for as much of the tourist season as we wanted!

I was loving the place, and quite enjoying the work, and John appeared to be, as well, so we decided to stay.

Phoned Karumba and cancelled our July booking there – but didn’t get the deposit back! It was only a night’s fee, anyway.